Home » 2018 starts with new formats of pressure on Central Asia

President Trump, between his New Year festivities at Mar-a-Lago and a morning round of golf, took to Twitter:

“Iran is failing at every level despite the terrible deal made with them by the Obama Administration.”

“The great Iranian people have been repressed for many years. They are hungry for food & for freedom. Along with human rights, the wealth of Iran is being looted.”

“Oppressive regimes cannot endure forever, and the day will come when the Iranian people will face a choice.”

Trump, who has made 1057 false claims since taking over as the president of the USA – about three untruths every day – was clearly trying to use Iran as a movable piece on the game board.

However, history is witness to the fact that while Iran can sometimes be used as a movable piece, it is also capable of changing the game.

What is alarming is that the twitter rants of Trump are acknowledged as the official statements of POTUS. The accumulated weight of his late night tweets is showing the first signs of where he would lead the world.

An irresponsible and unwise president in the White House is a new kind of pressure for Central Asia.

Iran is in chaos. The protests that started last week to voice complaints against unemployment have turned violent and political.

As of Tuesday, some 20 people had died and about 450 taken into custody in Tehran.

The supreme leader of Iran, Ayatollah Khamnei, said on Tuesday, “In recent days, enemies of Iran used different tools including cash, weapons, politics and intelligence apparatus to create troubles for the Islamic Republic.”

He said that he would address the nation about the events “when the time is right.”

President Rouhani has said that everyone has the right to protest but the display of dissent must be peaceful. He was speaking in the backdrop of the information that some of the protestors were armed and at least some of the deaths may have occurred because of their use of firearms.

Rouhani also took a somewhat defiant stance against the spiritual leadership when he said, “People on the streets do not ask for bread and water, but for more freedom.”

Nevertheless, he also said, “Our great nation has witnessed a number of similar incidents in the past and has comfortably dealt with them. This is nothing.”

The unemployment rate in Iran is around 13%, which is high but not alarming. The government, after the removal of some sanctions, is going through a retime of austerity for the sake of long term stability. Iranians are resilient people and they know how to deal with hardship without collapsing.

Ayatollah Khamnei has rightly pointed out that the trigger and prime mover of unrest is not inside Iran.

Trump has been insistently and mindlessly goading Iran for months now. Saudi Arabia is openly hostile to Iran. — On the other hand, Iran is also not a model friend and neighbor. 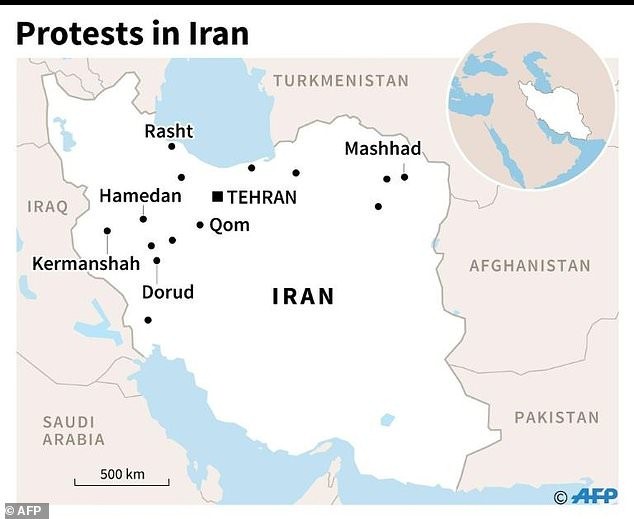 It will take a little while to identify the nature and extent of foreign interference but it is clear that we are almost back to the days of ‘colour revolutions’ and engineered regime change.

Conversely, the Iranian thread is woven into the turmoil of several countries including Yemen, Lebanon, Iraq and Syria.

If the chaos in Iran spiral out of hand, it may create economic pressure for Central Asia in different ways including the disturbance of the transport and transit activity.

This is always a possibility, sometimes distant, sometimes imminent, but what is different this time that we have a crown prince in Saudi Arabia who is apparently putting more in his basket than he can deal with.

Afghanistan is undergoing internal upheaval of its own.

President Ghani removed the governor of the Balkh province, Atta Muhammad Noor (Usad Atta) from his position in the middle of last month. Noor refused to comply with the orders and returned to the office. To date, he is still working as the governor of the province. The person appointed to replace him. Engineer Dawood, has not been able to take over.

Ustad Atta belongs to the Jamiat-e-Islami, a powerful political party currently headed by the chief executive Abdullah. This party was founded and led by the former president Burhanuddin Rabbani (father of the current foreign minister of Afghanistan), and the lion of Panjsher, Ahmad Shah Masood.

During the last few days Ustad Atta has unleashed a torrent of abuse against Abdullah. On 23 December 2017, he called Abdullah ‘a snake up our own sleeve.’ He was speaking to a crowd of about 23000 in Mazar-e-Sharif, the capital of the Balkh province.

“Your teeth will not sink into us,” Mr. Noor said, referring to Mr. Abdullah. “We will break your teeth.”

The unity government in Afghanistan is crumbling from both ends. In an improvised setup, the duo of President Ghani and Chief Executive Abdullah is steering the government.

While Abdullah is losing his support base – Ustad Atta was one of the most powerful allies of Abdullah – President Ghani has already lost his running mate, the first vice president of Afghanistan, Abdul Rashid Dostrem, who is currently abroad and has already made a failed attempt clandestinely to Afghanistan.

Fading legitimacy is not the only concern of the sitting regime.

The border between Tajikistan and Afghanistan – Sher Khan Port, Kunduz province – remained closed for two weeks and opened on 2 January 2018. Some 11000 containers were stranded at the border.

Tajikistan allowed only the transit cargo during this period.

It is not known as to why Tajikistan closed the border and what has changed in the last two weeks that encouraged it to open the border again. Whatever the reason for closing the border, it must have been something extraordinary because Tajikistan has always tried to maintain the best possible relations with Afghanistan.

Tajikistan and Turkmenistan are two countries that have always gone out of their way to accommodate Afghanistan. If discord can appear with these two countries, it doesn’t reflect very well on the relationship skills of Afghan government.

Together with this, if the legitimacy of the current regime in Afghanistan erodes any more, it will create space for the disruptive elements.

This would introduce some new ingredients to the current pressure on Central Asia on the Afghan border.

A Muslim female candidate against Putin

Ms. Aina Gamzatova has applied to register as a presidential candidate in the forthcoming elections in Russia. She is a successful journalist and owner of the largest Muslim media group in Russia – Islam.ru. Her media house runs newspapers, TV and radio stations, and websites. She is a prolific author and runs a charity.

She is also the wife of the chief Mufti of Dagestan, Akhmad Abdulaev.

Because she plans to run as an independent contender, she will have to collect and submit at least 300,000 signatures from supporters from all Russian regions. Candidates representing parliamentary parties do not have to collect any signatures, while those backed by parties not represented in the Russian parliament have to garner the support of at least 100,000 signatories.

Regardless, her message is loud and clear and that is where it creates a new form of pressure for Central Asia.

She is against the Wahabi brand of Islam, and she believes that enough has not been done to deal with the threat of extremism at the grassroots level.

She belongs to the Nakshbandi Sufi order that has tens of thousands of followers and whose leader, Said-Afandi Chirkavi, was killed by a female suicide bomber in the Caucasus in 2012.

Her first husband, the Muslim leader Said Muhammad Abubakarov, was blown up in his car back in 1998. His killers have never been found, but he publicly lambasted “Wahhabis.”

She has said in her books and speeches that Wahhabis – the people who form the core of the extremist interpretation of Islam, including the rank and file ISIS – are ‘duplicitous’ and ‘blood-thirsty.’

They are “duplicitous” and “blood-thirsty”, she has said in books and speeches, despite death threats and the killings of other Sufi-affiliated figures in Dagestan.

Ms. Gamzatova wrote in a recent article on Islam.ru, my candidacy “should not be seen within a clerical context or an attempt of Muslims to create a competitor to Vladimir Putin … It is a desire to publicly announce and support on the federal level a harsh anti-Wahhabism stance.”

She wrote on her Facebook, “Our country, Russia, is our home, and if we divide ourselves into Muslims and Christians, Caucasus natives and Russians, our country’s government will not exist.”

Her announcement comes at a time when the ISIS fragments are trying to make their way into Chechnya and Dagestan, Afghanistan, and possibly Central Asia.

Her bid for candidacy is meant to send the message that the extremism in Islam can best be tackled from within Islam.

While the usual and new pressures are mounting for Central Asia, these problems carry within themselves the solutions.

The first and foremost thing to do is to exercise utmost caution when dealing with the United States. Trump has gathered around him a team that lacks clear vision and direction. As we have said earlier, Trump is outsourcing chaos and there is the need to maintain safe distance not only from the Trump administration but also from the agents of chaos who may be acting on his behalf.

Central Asia needs to watch the situation in Iran very attentively. There is hardly anything that that Central Asia can do to restore normalcy in Iran because it depends entirely on the government and civil structures in Iran to handle the situation in the best possible way.

Afghanistan situation is also its own internal affairs and Central Asia can do nothing except for strengthening its own border security.

The presidential bid of Ms. Gamzatova in Russia hammers home the fact that the extremism in Islam can only be tackled decisively from within Islam. Central Asia would be well advised to partner with the Sufi Orders in the region, mainly the Nakshbandi Order, to nullify the inroads likely to be made by the poisonous interpretations of the religion.

Silver lining in the dark cloud

There is also the probability that the Trump machinations would lead to some collaborations in the region. — On the first day of this year, Trump singled out Iran and Pakistan for his wrath. It is quite natural that these two countries would try to lean against each other for strength. This would logically increase their positive interaction with Russia and China. If this happens, it would automatically create a protective ring around Central Asia.

There could, hopefully be a silver lining in this dark cloud. /// nCa