Home » The Turkish Glum – Part 1: Before the Glum

Basically, I was just going to propose that Erdogan should announce a national referendum to determine the fate of the Taksim square. That would remove any controversy fuelling the street demonstrations, I thought.

In a few hours, Erdogan offered just that: a national referendum on the question of Taksim square.

I shelved the article.

However, by 17 June 2013, it became clear that what was happening in Turkey was not rooted in anger against the reconstruction of a historical set of building at Taksim; it was something quite different and yet familiar because of what we have seen in country after country.

Suggesting that the Turkish unrest has more than a hint of the colour revolutions immediately attracts the label of ‘conspiracy theory.’

I will return later to the theme of conspiracy theories because several of our investigative reports were initially dismissed as conspiracy theory but later proved right on the dot.

The situation in Turkey – in truth Turkey itself as a society and country – is more than complex. In fact, it is a complex mix of endless combination of factors that are all infinitely complex in their own right.

While sitting in Central Asia, it may seem rather inappropriate for me to write on the situation in Turkey. There are two reasons why I have started writing this series despite earlier misgivings:

To the Turkish youth, who are under the powerful spell of spin masters, I would like to say what our beloved Baba, Süleyman Demirel, says: Dün dündür, bugün bugündür [Yesterday is yesterday, today is today].

Look around carefully what is happening in the world, what is the situation of the world economy, the wars and bloodshed in your neighbourhood. Look at where you were economically 12 years ago and how you came out relatively unscathed from the still lingering global financial and economic crisis. Look with open eyes and decide whether you want to destroy your own homeland?

Terracotta Army of China and Standing Man army of Turkey

There is a ghostly resemblance between the Terracotta army of China and the Standing Man protests of Turkey.

What is known about the Terracotta Army of China is that it is a collection of about 8000 sculptures depicting the armies of the first emperor of China, Qin Shi Huang. They were found in 1974 in an elaborate maze of trenches near the tomb of the emperor, who probably passed away in 210 BC.

The sophisticated, lifelike figures, depicting everyone from general to ordinary soldier and the civilians in their support role, were the product of careful planning and disciplined production. This is what forces a comparison between the Terracotta Army of China and the Standing Man protestors of Turkey:

The visual comparison between the Terracotta Army of China and the Standing Man army of Turkey is fairly jarring.

Instead of an inspiring show of protest that it was intended to be, the Standing Man act comes across as depressing and intellectually barren. 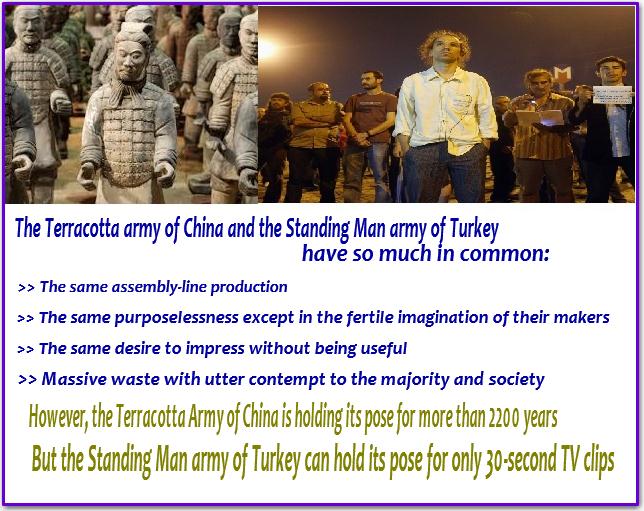 The comparison between the Terracotta Army of China and the Standing Man of Turkey is not just unflattering; it wallops in the guts. That is the whole point.

These protests are not designed to redress some grievances. Their main objective is to leave the government with no choice. If the government keeps quiet, it will come across as weak; if the government reacts, it is portrayed as brutal and undemocratic.

The purpose here is to goad the government into more and more reaction and to record that reaction and beam it across all kinds of platforms including the TV (most notably in this case being DHA, one of whose people recently attended Bilderberg meeting), Twitter, facebook, Instagram etc.

Whether the Erdogan government is popular or not is not the point. The core idea is to generate a global wave of revulsion against team Erdogan.

If these were genuine protests against the reconstruction plans of Taksim square, they should logically have stopped when Erdogan announced the referendum. However, instead of any signs of calm, these protests are breeding systematically. To the hidden hand and to the ‘why’ of this phenomenon we shall return later.

By comparing the protestors with the Terracotta Army of China we are trying to hammer home the truth that these are not protests at all.

When a minority tries to unseat a popularly elected government through such methods it is anything but democracy. In the initial stages it could have been given some benign name but they way it is progressing, it has come to bear a close resemblance to terrorism.

In some later articles in this series we shall also try to deal with the fact as to why a strong and independent Turkey is not the liking of some powers. They pine for the good old days when Turkey was pliable and inert as Sick Man of Europe.