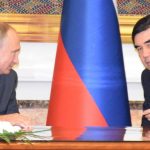 nCa Report Ashgabat, 3 October 2017 (nCa) — The summit talks Monday between the presidents of Turkmenistan and Russia culminated on the signing of the treaty of strategic partnership between the two countries. Thirteen other documents were also signed on the occasion in addition to several more that were signed in a separate ceremony between […]