You are here: Home / Articles And Reports / TurkStream – More than just a gas pipeline

The opening ceremony of TurkStream, the pipeline for transportation of the Russian gas to Turkey, and onward to Europe, via the Black Sea was held on 8 January 2020 in Istanbul although the gas had started flowing on 1 January 2020.

Participants of the ceremony included President Erdogan of Turkey, President Putin of Russia, President Vucic of Serbia, Prime Minister Novak of Bulgaria, and other high officials.

Passing through the Black Sea and bypassing Ukraine, the TurkStream has two strings with a combined throughput capacity of 31.5 billion cubic meters. The first string will deliver gas to Turkey, while the second string is intended for gas transit to southern and southeastern Europe through the Turkish territory.

TurkStream (also known as Turkish Stream) is the successor project of South Stream, which was scrapped in 2015 following a misunderstanding between Turkey and Russia created by the downing of a Russian fighter jet. After the normalization of bilateral relations in the summer of 2016, the agreement for TurkStream was signed.

Construction work started in May 2017. The pipe laying for TurkStream took 15 months and was completed ahead of schedule in November 2018. The construction of the receiving terminal near the Kiyikoy settlement in Turkey was finished in 2019.

The starting point for feeding gas into TurkStream is the Russkaya compressor station (CS), which forms part of Russia’s Unified Gas Supply System and is located near Anapa. With a capacity of 224 MW, the CS maintains the pressure required for transmitting gas along the pipeline’s two strings through more than 930 kilometers up to the Turkish coast where gas enters the receiving terminal.

It is a marvel of engineering. This is the first time ever that a pipe of 813 millimeters in diameter was laid at a depth of 2,200 meters. 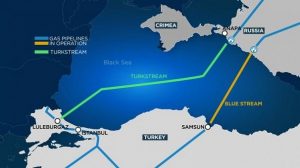 This is the second gas pipeline between Russia and Turkey through the Black Sea. The first one was the Blue Stream, which was commissioned in 2005.

The laying of the pipe along the bed of the Black Sea was contracted to Allseas Group, which is headquartered in Switzerland with offices in the Netherlands, Australia, Brazil, the USA, Belgium, Portugal, and the UK.

TurkStream is currently supplying gas to Bulgaria and North Macedonia, which were previously fed by the Trans-Balkan pipeline passing through Ukraine and Romania.

Both the strands of TurkStream are using pipes with an outer diameter of 810 mm (32 in), manufactured by Europipe GmbH of Germany, Vyksa Steel Works of OMK and Izhora Pipe Mill of Severstal of Russia, and a consortium of Marubeni, Itochu and Sumitomo of Japan. The internal pressure of the pipeline is 300 bars (4,400 psi).

The offshore section of the pipeline, some 930 km in length, has about 230 km in the Russian maritime zone and nearly 700 km in the Turkish waters.

Serbia, Hungary, Slovakia, Austria, and Bosnia and Herzegovina are also expected to receive gas from this pipeline. The responsibility for the extension of the pipeline lies with the consumer country.

The project was initially expected to cost Euro 11.4 billion but ended up with a higher price tag. Though exact figures are not available, according to some estimates it may have run about 160% above the estimated cost.

TurkStream is certainly more than just a gas pipeline – a lot more.

It adds to the diversity of routes, though not the source. This, in itself, is helpful in loosening the political straitjacket threatening to choke the energy security of Europe. Specifically, it dilutes the acidity of the American influence in Ukraine.

The implementation of TurkStream has added to the experience and technology for submerged pipelines. This will be useful in similar projects around the world.

This pipeline will diminish the risk of volatility in the Turkish-Russian relations, thereby affording a cushion against the sudden economic shocks not just for these two countries but many more.

As we know, the renewable energies are already a viable alternative for the traditional fuels including the natural gas. In the foreseeable future there will be considerably less need to burn the natural gas as a fuel. However, the gas piped through TurkStream and other pipelines will form the valuable base for the expansion of polymer industries in the receiving countries. The polymer groups are the future when we look at their potential in combination with the vast possibilities of the nanotechnologies and 3D printing. The investment in gas pipeline projects such as TurkStream is investment in the future.

If two countries can lay a pipeline across a body of water without the need for consent from other littoral states, this precedent should apply to the Caspian too. Even if Caspian is a much smaller body of water compared to the Black Sea, the convention on the status of the Caspian allows it to be treated as a sea, thereby allowing to borrow the precedents from the other seas.

TurkStream also adds to the power of energy diplomacy. It will encourage the promotion of the vital elements of stability that are a natural extension of international energy projects. /// nCa, 13 January 2020