The verdict of 11th May 2013, by the Pakistani voters, has demolished several myths, establishing new realities which promise a brighter future for Pakistan, emerging from the depths of sorrow and sacrifices of decades and the sufferings at the hands of a corrupt and incompetent government, which almost shook the very foundation of the country. The myth that the Pakistani nation, with forty-five percent illiterates cannot nurture democracy, has been shattered, by our voters, who in a matter of ten hours of day light, have rejected most of the corrupt and the incompetent, thus correcting the course of democracy.

The 11th May 2013 verdict, in fact is the affirmation of the 1947 declaration of the Pakistan Movement, that:

“Pakistan will be a democratic state, with a just social order based on the principles of Islam”

The nation has rejected secularism, religious extremism and ‘isms’ of all kind. It has voted for Moderation as in 1947, expressing the ‘true will’ of the Pakistani nation. It is a matter of record, that whenever the Pakistani nation has been afforded fair and free elections, it has voted only for the moderates, which is the fundamental truth, lying at the heart of its democratic ethos.

Our national institutions, namely the Army and the Judiciary have mainly been responsible for the derailment of democracy in the past. Now they stood wholeheartedly to determine the right course for the democratic order and have defeated all machinations and manipulations to sabotage the election process, thus safeguarding the nation from the catastrophe which struck Indonesia, some half a century back, where a bloody revolution took place, resulting into more than a million dead, and the Islamic order was ultimately established over the alien ideology. This happened because the elections could not be held in Indonesia for a peaceful transition, whereas elections have helped Egypt, Turkey and Pakistan, to find peace and stability.

The new set-up will soon take-up the reigns of the government, to face the challenges, with the support of the broad masses who inherit the “democratic consciousness and true vision of Pakistan”. And I may not be wrong in saying that the new leadership also has the ‘fear of God’ in their hearts which makes them taller than those who came before them.

It is rather pathetic to see PPP and ANP rejected by the voters. ANP melted away conceding space to PTI which has emerged as the majority in KPK. The PPP, battered and bruised, has receded to its base in interior Sindh, while MQM, as usual rules urban Sindh, forcing a coalition government for the sake of political harmony. Surprisingly Imran Khan targeted Punjab, but hit the ‘bull’ in KPK province. (A bad shot indeed). It is hoped he will now be allowed to form the government in KPK so that his leadership is tested in dealing with the problems of this most turbulent region of Pakistan. Our border areas with Afghanistan are the hub of the Islamic Resistance, which has defeated the Soviets and the Americans and their allies. From here also rises the resistance against Pakistan. Such is the muddle Imran Khan has to wade through. Sagacity demands that Nawaz Sharif should help him to deal with such daunting problems, to bring peace in Pakistan.

The PPP and ANP have learned the bitter lesson that while in power they could not take the masses for granted, who have taken the revenge for the betrayal. The PPP and ANP must therefore suffer this verdict of history, rightly called the ‘Revenge of Democracy’.

The economy of the country is in serious jeopardy, yet one must have confidence in the resilience of the nation to fight back, the way our agriculturists and the industrialists have fought the curse of energy crisis maintaining the export level of about US$ 30 million. Our overseas Pakistanis now remit over 15 billion US$ a year, lessening the debt burden liabilities. And amazingly our Stock Exchange has been buoyant for several months, with index crossing the figure of 20,000, despite all the bad news. It appears that our businessmen and the investors perhaps knew about the new face of politics to emerge in Pakistan.

The curse of terrorism will gradually fade away with the withdrawal of the occupation forces in Afghanistan, who also have a stake in Pakistan. We have to be careful in being part of the “strategic cooperation to defeat terrorism in Pakistan and Afghanistan” Mr. Nawaz Sharif, Imran Khan and Maulana Fazlur Rahman are on the same page on the issue of dealing with the threat of terrorism, as declared by the All Parties Conference on 28th February 2013 and subsequently endorsed by the parliament.

Mr. Nawaz Sharif seems to be in great hurry to improve relation with India and find solution to the Kashmir problem. No doubt this is an important matter, but must be seen in the context of changed geo-political realities of the 21st century – particularly the ‘Shift of the Strategic Pivot’ to Asia Pacific; withdrawal of occupation forces from Afghanistan; merging Russo-Chinese interests in the region; Indian hegemonic ambitions of regional primacy and the surge of Muslim Consciousness’ and its impact on Pakistan. The important issues of rivers water, Gawadar and Iran-Pakistan Gas Pipeline, demand a very careful approach. The new regime under Nawaz Sharif, no doubt would face many challenges, but the ideal conditions provided by the verdict of 11th May 2013 provides opportunities, to rise to the occasion, to justify the trust reposed in them by the nation. 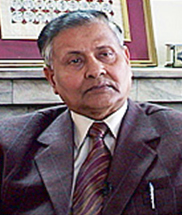