The 16 days of Activism started on International Day for the Elimination of Violence against Women on 25 November to once again focus global community’s attention on one of the divaricate social problem – Gender-Based Violence. 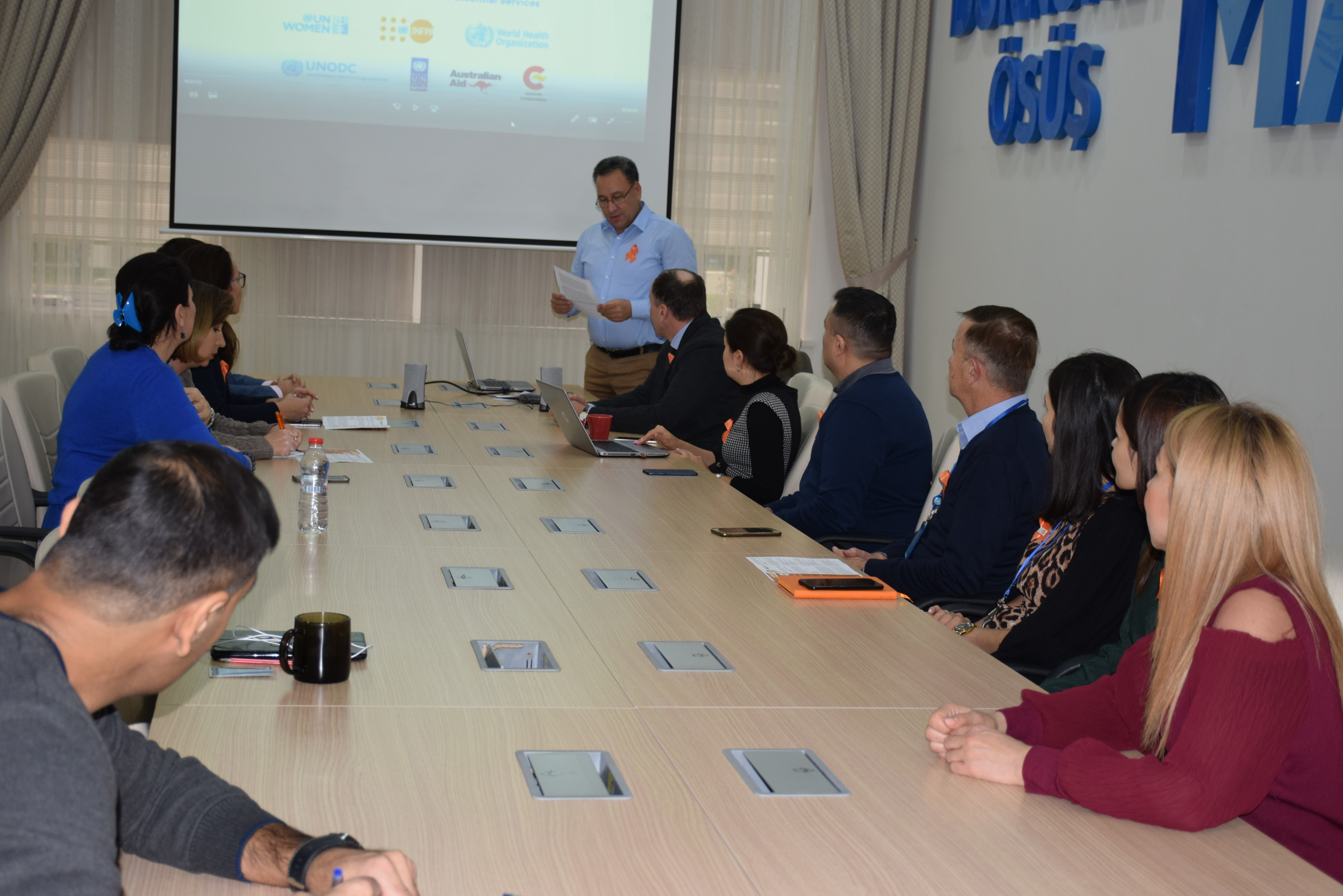 The time is to remember the negative episodes from our own life experience (both for man and women), as well as those surrounding examples in order to voice strong commitment that the ordeal will never recur and the helping hand will be extended to those who suffered. Otherwise, the silence and appeasement are the same crime.

UNFPA in Turkmenistan, joining the global campaign, organized Monday a briefing session with the official statement by the Heads of UN agencies, UNDP, UNICEF, UN Women and UNFPA, calling for solidarity with survivors and survivor advocates and women’s human rights defenders who are working to prevent and end violence against women and girls.

Text of the Joint Statement can be found here: http://www.unwomen.org/en/news/stories/2018/11/statement-joint-international-day-for-the-elimination-of-violence-against-women-and-girls

The briefing was moderated by National Coordinator on gender issues Dovran Yamatov and attended by the staff of UN agencies, accredited in Ashgabat. In spite of the grey drizzly weather outside, the bright orange ribbons, pinned on our chests, symbolized that all of us stand for the bright future, free of violence against woman, stereotypes and gender-based bias.

The noteworthy information, presented during the gathering, was that Turkmenistan is going to take some important steps towards enhancing gender equality. 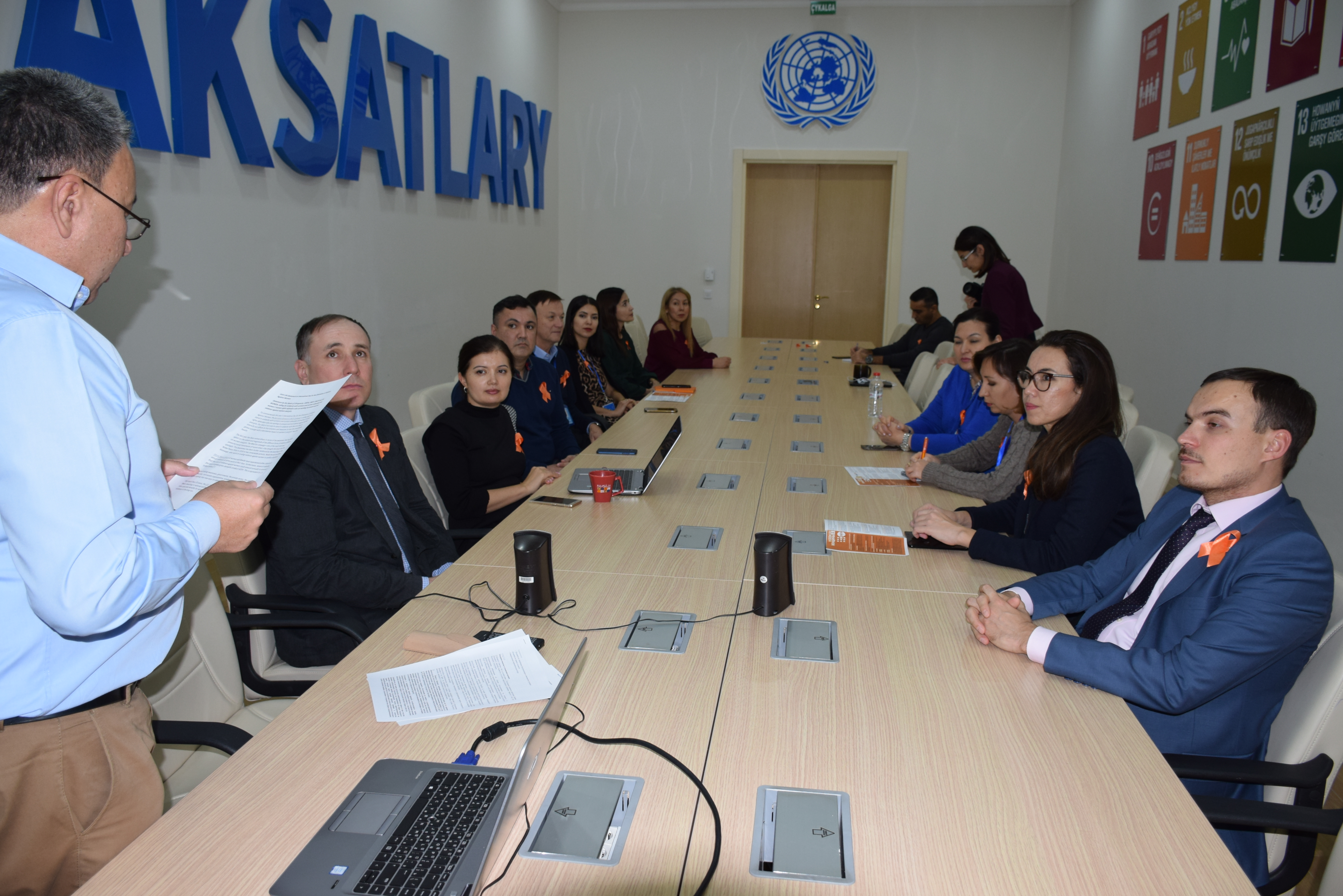 An important matter is the readiness of the government to hold National Survey on Health and Status of a Woman in Family in 2019.

The survey scheme and methodology has been prepared and agreed with such national partners and stakeholders, as the parliament, ministries for healthcare and social security, State Statistical committee and others.

The project will cover 6000 households. Woman aged 18-59 will answer the questionnaire on anonymous basis. Because of the sensitivity of the questions, the respondents will be interviewed by family physicians, as they enjoy more confidence and trust, prepossessing for candid conversation.

UNFPA believes the outcomes of the survey will give valuable guidance for further elaboration of national legislation with possible adoption of new laws in line with the international standards.

Turkmenistan had already taken several national level steps on promotion of gender equality in society along with acceding to universal instruments. These include National Action Plan on Gender Equality for 2015-2020, as well as adoption of the Law on state guarantees of equal rights and equal opportunities for women and men.

Moreover, Turkmenistan participates in solution-search process on regional level. Earlier this month, Turkmen delegation, consisting of Chairman of the Women’s Union and head of the human rights department of the Institute of state, law and democracy attended the sub-regional conference “Turning policies into action: eliminating gender-based violence against women and girls in Central Asia” in Bishkek.

Every third woman in the world has faced some kind of violence at least once in a lifespan, often from loved ones or families. The impact of such violence is much deeper. Children, witnessing harsh treatment of mothers/sisters by fathers/brothers, are at risk of becoming both despot and victims of extremely negative form of behavior.

The global phenomenon of gender-based violence has not spared the Central Asia as well. The problem rather is passed over in the silence. The reasons vary from personal shame to the engrafted image of oriental woman, associated with gentleness and endurance.

Nevertheless, the fast-changing world shifts away the mother’s edifications on girls’ passive obedience to husband/male family members, abutting with perception of beating and moral coercion as norm.

The confrontation entails new violence, while the inter-gender harmony and consent are the pledges for happiness of future generations.

Here are 16 ways you can get involved in 16 Days of Activism against Gender-Based Violence: http://www.unwomen.org/en/news/stories/2018/11/feature-guide-to-ending-violence-against-women