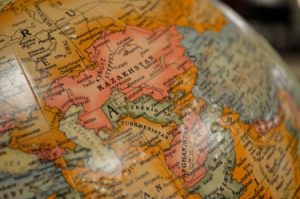 The United States of America seems to be getting ready for a fresh round of battling Russia and China’s influence over the strategically significant region of Central Asia. Uncle Sam, however, has never hidden willingness to serve as a counterbalance and a “constructive” alternative to Central Asia’s economic and political relations with two neighboring superpowers. At the same time, now, in the emerging multipolar world, such aspirations are gaining momentum and intensity.

Here are the theses from both speeches describing the prerequisites for the US incentives to strengthen its position with the region and the future priorities of activity in Central Asia:

Kaur reported that the Fiscal Year 2023 USAID Budget Request includes US $198.3 million for Central Asia—a 34 % increase over the FY 2022 Request.

These funds, in particular, will be used to help vulnerable families in Central Asian countries; to increase the connectivity of the region and diversify the economy, since increased regional cohesion and robust cooperation with the United States, Europe, and other global partners is critical in reducing the region’s reliance on Russia and the People’s Republic of China.

To put it gently, such statements coming from American officials, particularly those directly in charge of dealing with the Central Asian region, seem disconnected from the geopolitical reality. And this is how reality appears.

Both China and Russia enjoy strategic partnership with all Central Asian countries. In 2010-2021 alone, the volume of accumulated Russian investments amounted to about US $30.5 billion.

There are more than 10,000 Russian and joint ventures operating in Central Asian countries, providing 900,000 jobs.

Chinese and Russian investments have created dozens of transport, industrial, and energy infrastructure facilities in the region.

The degree of ties—political, economic, and humanitarian—with China and Russia, suggests that Central Asian nations deliberately chose to form strategic partnership with these superpowers, guided by their own goals and prospects.

After all, within three decades of independent development, these states have constructed and tested their foreign engagement agendas, and they have gained good skills in navigating the geopolitical and geoeconomic fields.

Consequently, the words of State Department officials that it is necessary to reduce the reliance of Central Asia on Russia and China, or to offer the United States as an alternative to “Russian bullying and Chinese debt” (quote from Donald Lu), unwittingly raise doubts and questions — Is this misunderstanding (or maybe persistent rejection) by the Biden administration of the true interests of Central Asia? Does Washington consider Central Asia a weak-willed puppet, questioning the political viability and self-sufficiency of the top leaders of these countries?

The regional focus of American foreign policy will not be enhanced by a mistaken perception of Central Asia, that much is clear.

Furthermore, the actual weight of the region’s relations with China and Russia, underestimated by Washington, can easily catapult any ideas to undermine those strategic comprehensive ties to nowhere. ///nCa, 15 September 2022