You are here: Home / Articles And Reports / FMs of the neighboring countries of Afghanistan met in Tehran

The disastrous withdrawal of the US-NATO troops from Afghanistan and the subsequent rise to power of the Taliban in Kabul led to serious shifts in the political, economic and social landscape of the entire region. 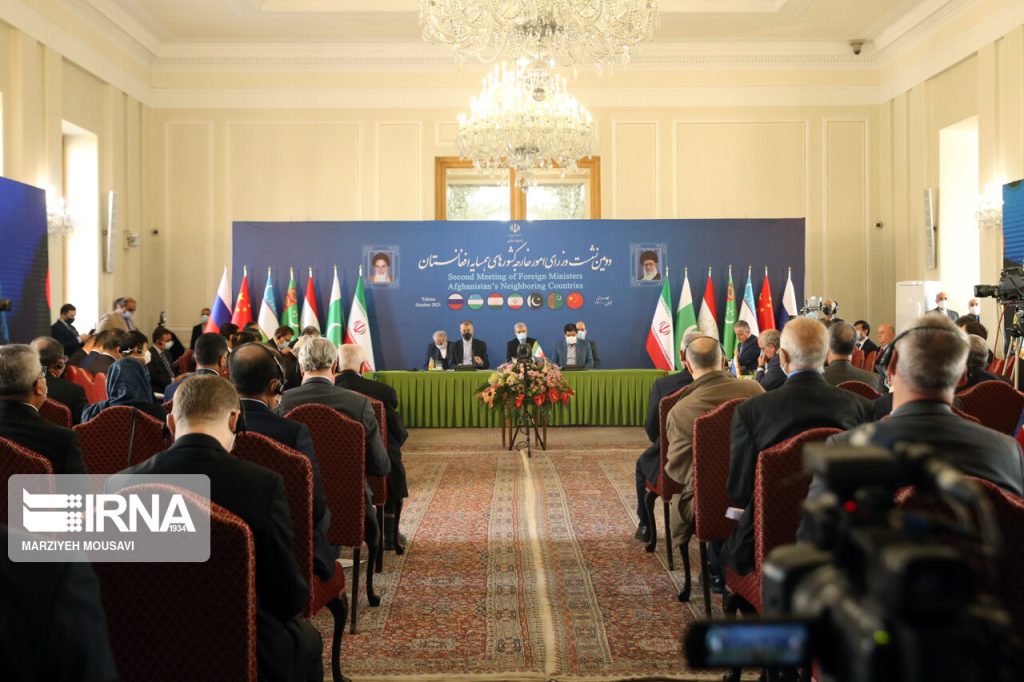 Despite the fact that the international community is in no hurry to recognize the Taliban, the major players in international politics are engaged in drawing their partnership lines with the new Afghan authorities. These strategies show political and economic pragmatism and de facto recognition of the new reality in the life of the Afghan nation.

The regional format of meetings of Afghanistan’s neighbors make it evident that regional players are trying to develop an effective collective mechanism to create favorable external environment for the Afghan people to overcome a complex transition period. 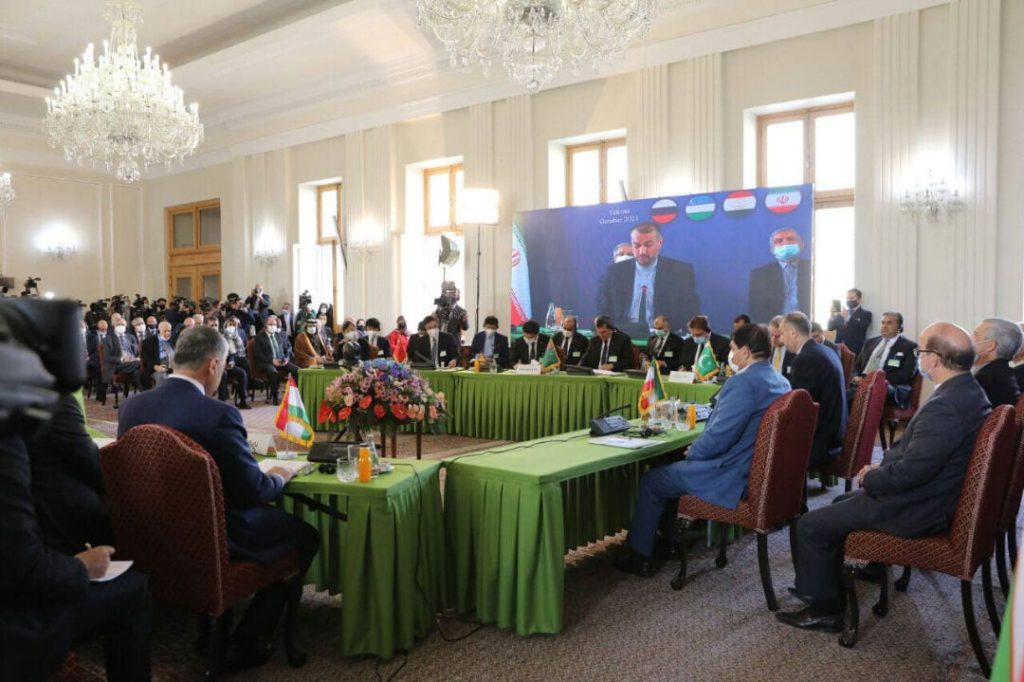 The first meeting of Afghanistan’s neighbors was held on 8 September 2021 at the initiative of Pakistan.

The parties have agreed to hold the third round in China in 2022.

The meeting has issued a joint statement.

Here are the briefs of statements by key speakers of the Tehran meeting (based on press releases of the foreign ministries of these countries and media):

China: expectations of Beijing and the world community from the Taliban

It is noteworthy that on the eve of the ministerial meeting in Iran, the Chinese Foreign Minister had separate meetings in Doha with Acting Deputy Prime Minister Mullah Abdul Ghani Baradar and Acting Foreign Minister Amir Khan Muttaqi of the Afghan Taliban’s interim government.

After the meeting, Wang Yi told reporters that the parties had agreed to create a working-level mechanism.

According to him, Beijing’s expectations from the Taliban fit into four directions: first, the building of a more open and inclusive political structure with the participation of all ethnic groups; second, implement moderate and prudent domestic and foreign policies, including the protection of the legitimate rights and interests of women and children; third, make a clear break with all terrorist forces including the Islamic State and the East Turkestan Islamic Movement; fourth, pursue a peaceful foreign policy and live in harmony with other countries, especially its neighbors.

China resolutely opposes all threats of sanctions and interference in internal affairs. As long as we remain patient, proceed step by step, and actively interact with the Afghan interim government and other parties and ethnic groups, I believe the Afghan Taliban will be able to understand more clearly what actions are more in line with the fundamental and long-term interests of the Afghan people, as well as the expectations of all parties, in order to be more smoothly integrated into the international community”, said Wang Yi.

“We will continue to listen to the voices and needs of the Afghan people and play a constructive role in restoring stability and achieving development in Afghanistan within our capacity”, he stated.

He also called on the United States and some Western countries to take practical action as soon as possible to effectively help mitigate any potential humanitarian crisis in Afghanistan.

Pakistan: How can we help Afghanistan become a stable and sustainable state?

According to Qureshi, in order to ensure sustainable peace and stability in Afghanistan, it is necessary to reflect the multi-ethnicity of society in the political structure, to ensure full respect for the rights of all Afghans, regardless of gender.

“It is essential to prevent renewed conflict and foil the designs of spoilers, both within and outside Afghanistan”, he added, calling on all stakeholders to avoid repeating the mistakes of the past and show solidarity with the Afghan people.

Qureshi highlighted the economic aspects of ensuring stability in Afghanistan.

The drought of the last two years, high inflation, and the cease of funding from former donors (whose financial injections accounted for up to 70% of the Afghan budget) plunged the country into a severe economic crisis, as a result of which more than 90% of Afghans risk falling below the poverty line next year.

Many countries have taken pledges to support Afghanistan. However, as the minister noted, “good intentions must be translated into practical actions.

Islamabad believes that the economic downturn can be reversed by giving Afghanistan access to its frozen assets and by making collective efforts. Otherwise, economic collapse will yield instability, conflicts and the influx of refugees to neighboring countries.

What kind of help can be rendered to Afghanistan to put the country on the path of stability, sustainability and prosperity? Pakistan proposes the following:

(based on reports from the Iranian news agency IRNA)

The crisis that worries all of us today is the legacy of the inappropriate intervention of repressive forces in our region, Iranian Foreign Minister Hossein Amirabdollahian said at a meeting of Afghanistan’s neighboring countries held in Tehran on Wednesday.

Tehran proposes to form security and  intelligence cooperation mechanism to combat organized crime and terrorism. Iran stands for accelerating the exchange of information and coordination of actions between the countries of the region, including Afghanistan’s neighbors.

According to him, UN Secretary-General Antonio Guterres can mediate between the Afghan parties to reach an agreement on the political future of this country.

The Iranian foreign minister noted that “it is necessary to form an inclusive government [in Afghanistan] with the effective and stable involvement of all ethnic groups and faiths.” “We expect neighboring countries to use all their influence on the Taliban leaders and other parties in Afghanistan <…> to form a government,” he said.

He stressed that Iran supports the creation of an inclusive government in Afghanistan, adding: “We all have to help Afghanistan get out of the current situation.”

Touching upon the humanitarian assistance to the Afghan people, Amirabdollahian urged to activate the relevant program of the Organization for Economic Cooperation on Afghanistan.

“We believe that, first of all, all neighboring countries and at the same time the international community should pay special attention to the political and humanitarian situation, the spread of terrorism, drug trafficking and respect for human rights and women in the current situation in Afghanistan,” the Iranian foreign minister stressed.

Russia: responsibility for the rehabilitation of Afghanistan lies with the United States and Western countries

Russian Foreign Minister Sergei Lavrov has accused the United States and Western countries of the current situation in Afghanistan, where there is rampant international terrorist groups, unprecedented drug production and corruption, while the country served only as a tool for “attaining their narrow geopolitical goals.”

Lavrov called on the neighboring countries of Afghanistan to prevent the military presence of US and NATO forces on their territory.

Meanwhile, Moscow highly appreciates the goals set out by the Taliban to stabilize the military-political situation in Afghanistan, to include the representatives of national minorities and political forces in the interim government, as well as efforts to resume the operations of the bodies of state administration, to create a regular army, and to ensure the safety of foreign diplomatic missions.

However, Russia believes that Afghanistan will be able to develop a normal policy, in particular in neighboring countries, provided it resolutely combats drugs production and smuggling, international terrorist groups entrenched in the territory of Afghanistan and manipulated from the outside.

Lavrov expressed concern about the possible penetration of terrorist and criminal elements into neighboring countries under the guise of refugees.

Stressing that the socio-economic reconstruction of Afghanistan will require immense financial costs, Lavrov underlined that “the main responsibility should be borne by those who have driven that country into its present state.” He recalled that the countries of the Moscow format on Afghanistan addressed an appeal to the UN to play the role of coordinator in providing financial, economic and humanitarian assistance to Afghans.

At the meeting, Turkmenistan was represented by the minister of foreign Affairs Rashid Meredov.

“We should strive to ensure that all ethnic groups are represented in the future of Afghanistan, and ensure the rights and interests of all citizens of this country,” Meredov said.

The Turkmen foreign minister pointed out that the current economic situation in Afghanistan is unsatisfactory, and the present negotiations should become a platform for making the right decisions to resolve the problems of the Afghan people.

He noted that the interim government of Afghanistan is facing economic challenges in the fight against terrorism.

“In this regard, it is important to make essential decisions on the rehabilitation of Afghan society and the return of the Afghan people to normal life, because improving the situation in Afghanistan will lead to an enhancement in the situation across the region,” Meredov stressed.

(based on the press release of the MFA Uzbekistan)

On 27 October 2021, the minister of foreign affairs Abdulaziz Kamilov took part in the meeting of the foreign ministers of the neighbors of Afghanistan, held in Tehran.

During his remarks the Uzbek foreign minister noted that a completely new reality has developed in Afghanistan today. An interim government has been created, which has full power and seeks to gain international recognition.

It was stated that in the foreseeable future Afghanistan will remain an important factor of regional security, directly affecting the national interests of regional countries, primarily neighboring states.

It was emphasized that at the present stage it is necessary to develop a post-conflict strategy for Afghanistan in order to prevent the international isolation of this country.

The meeting noted the key importance of consolidating the efforts of the international community in the issue of restoring the economy of Afghanistan, providing emergency humanitarian and other aid to the friendly Afghan people.

The meeting was inaugurated by His Excellency Mohammad Mokhber, the Vice-president of the Islamic Republic of Iran who gave a comprehensive speech on Afghanistan situation. The video message by His Excellency Mr. Antonio Guterres the Secretary General of the United Nations was then screened in the opening.

Next, the honored foreign ministers gave their speeches on Afghanistan concerned matters. The meeting was then closed by approving the ministerial joint statement.

Following the talks and discussions in an atmosphere of confidence, multilateral understanding and constructive approach,

Noting that situation in Afghanistan has changed fundamentally and stressing support for the national sovereignty, political independence, unity and territorial integrity of Afghanistan, and non-interference in its internal affairs;

Recalling the universally accepted principles of international law in particular the Afghan people’s right to decide on their own future independently, and respecting the aspiration of the Afghan people for realizing durable peace, hope to see an Afghanistan enjoying stability, development, prosperity and harmonious relations with its neighboring countries;

Agreeing that countries primarily responsible for the difficulties in Afghanistan should earnestly deliver on their commitment, and provide Afghanistan with urgently needed economic, livelihood and humanitarian assistance to help realize a stable transition of the situation in Afghanistan;

Noting that an inclusive and broad-based political structure with the participation of all ethno-political groups is the only solution to Afghanistan issues;

Expressing the strong support of neighboring countries of Afghanistan to achieve peace, stability and national reconciliation in the country and encouraging all parties, including Taliban to continue political dialogue and consultations for the solution of the outstanding issues, and future development of the nation;

Emphasizing that international and regional organizations in particular the United Nations agencies and relevant members of the UN Security Council should abide by their responsibility for political settlement of Afghanistan issues, rendering support to Afghans to develop the socio-economic infrastructure and providing economic and humanitarian assistance;

Taking with great concern into consideration the deteriorating economic situation in Afghanistan and urging the international community to provide humanitarian assistance on urgent basis;

The Foreign Ministers appreciated the Islamic Republic of Iran for hosting the second round of the meeting and agreed to hold the third round in 2022 in China. /// nCa, 28 October 2021