You are here: Home / Archives for S M Rahman 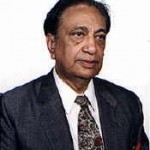 Dr. S.M. Rahman It was interesting to read General Aslam Beg’s article titled “Say No To It”. In very simple words he has described the conduct of the Army Generals, who imposed military rule; those who directly intervened, but did not take-over, and those, who resisted the temptation to intervene and allowed democracy to follow […]