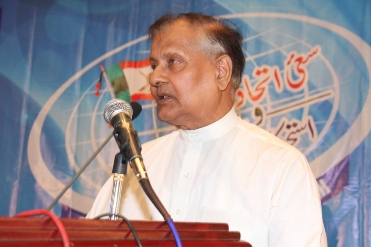 President Trump is building-up his strategic naval forces, in the Gulf Region, NOT to fight the ‘naval superiority battle’ of the deep seas, but to apply “Shock and Awe” therapy on the Iranians, suffering from decades of “Monetary Terrorism” and “Social Engineering” – an act of war, imposed over several decades. He thinks it is the opportune time for Israel to strike to achieve the objectives of the “Warsaw Plan,” February 2019. The plan envisages Israel ‘to take-on Iran’ supported by US and the coalition members. US will not get directly involved in this war. They consider Iran politically and economically weakened for Israel, to bring about Regime Change in Iran. It appears that, both USA and Israel have learnt no lessons from their contemporary wars in the region, such as:

First. In 1980 US induced Iraq to invade Iran, to Crush the Revolution and bring about Regime Change. The day after, General Zia called an emergent meeting of the cabinet to discuss the impending situation. As CGS, I represented GHQ. All the participants were of the opinion that Iran will be defeated in a matter of weeks. I intervened:

I was proved right. After eight years of brutal war, the Iranian forces crossed the Shat-al-Arab and concentrated at Faw, to capture Basra. Saddam attacked with chemical weapons, supplied by the civilized world, causing heavy casualties. Iran had no defense against chemical weapons and opted for cease fire. Situation now is very similar, but militarily Iran is ten times stronger than in 1980.

Second. In 2006, an Iranian military delegation called on me. There was threat of war by Israel. I advised them that “they could counter Israel by firing free flight missiles and rockets, to degrade their “Iron-Dome, air defense system.” In the meantime, Reuter’s journalists also called and asked me about my discussion with the Iranians. I told them, “If Israel attacked, Iran would reply with missiles and rockets to engage targets deep into Israel.” Instead of Iran, Israel selected Hezbollah as the weaker enemy. Hezbollah countered by firing free flight rockets in large numbers, a threat which the American Iron Dome could not effectively counter. The Israeli government panicked and decided to use the Army, to destroy Hezbollah missile firing sites, but failed, because man to man, they were no match to Hezbollah fighters.

The situation on ground today appears most unfavourable for Israel. If Israel decides to engage Iran, the estimated number of over 200,000 missiles and free flight rockets, would be raining over Israel from three directions – Iran, Hezbollah and Hamas. That would degrade the Iron-Dome Air Defense System of Israel, within days. Only recently Hamas fired over 400 rockets over Israel and the Israeli air defense system could intercept only 60% of those. This factor would form the ‘critical mass’ for decision between the two “opposing will”.

Third. In 2001, when Pakistan joined US war against Afghanistan, I warned General Musharraf:

Having lost a trillion dollar and lives of over 2400 soldiers in Afghanistan, America and the allies seem to have missed “the logic of conflict,” which derives strength from the Ideology of the Iranian Revolution and the ideology of the Afghan Jihad. Both meet at one point – Oneness of Allah, guiding the destiny of nations. America, the sole super power of the world, thus is beseeching Taliban for cease fire, for an honorable exit. Sure, Israel is listening and watching.

Iran will not target any of the US forces in the region, so as not to invite a Pearl Harbor, although the enemies of Iran are trying to get USA drawn into the conflict. Four oil tankers, heading for US ports have been “carefully damaged” near the UAE Coast-line, some 140xKM distance from the Gulf. The Houties from Yemen have carried out done attacks to damage the two pumping stations supplying oil to Saudi towns. The ruse may work but Iran will ‘take Israel hostage’ with missiles raining from three directions – Iran, Hezbollah and Hamas. No doubt, Israel can engage targets deep inside Iran using the American F-35 – the Air superiority weapon, yet the Iranians are also capable of giving a big surprise to the Israelis, threatening its very existence. If war breaks-out, it would be characterized by massive use of missiles, rockets, drones and suicide bombers, as the deciding factoss. It would be in the interest of Israel; therefore, not to go “the Trump way” but follow the two nation theory to establish lasting peace in the region.