You are here: Home / Articles And Reports / Online summit of Council of CIS Heads of State held on 15 October 2021

On October 15, 2021, a meeting of the Council of CIS Heads of State was held under the chairmanship of the President of the Republic of Belarus Alexander Lukashenko. It was held in the format of video conferencing. 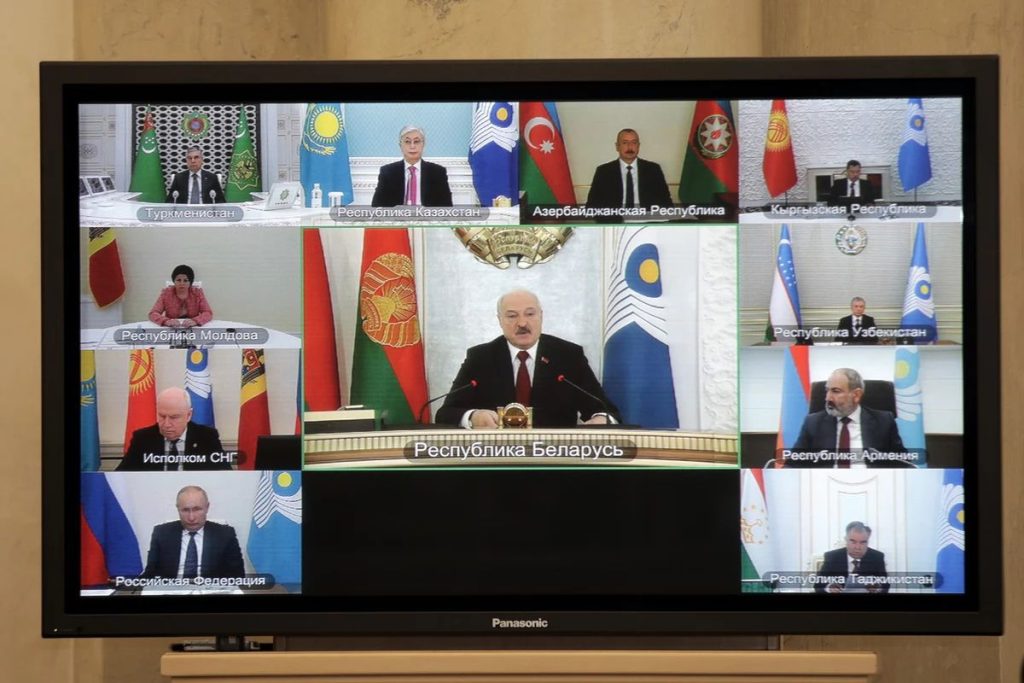 The heads of state exchanged views on cooperation in the format of the Commonwealth, and made a decision on the chairmanship of the CIS in 2022 – it will pass to Kazakhstan.

The heads of state adopted a Statement on the occasion of the 30th anniversary of the Commonwealth. This document summarizes the results of the Commonwealth’s activities, assesses its role in the formation and strengthening of the statehood of each of the Organization’s members, the preservation and development of economic, humanitarian and cultural-historical ties, which are based on common interests and common history.

In addition, the members of the Council adopted several more important statements. Among them – the Statement of Cooperation in the Field of Biological Safety. This document notes the importance of the Convention on the Prohibition of the Development, Production and Stockpiling of Bacteriological (Biological) and Toxin Weapons and on Their Destruction as one of the pillars of the international security architecture.

Another statement adopted by the heads of the CIS states is on the development of cooperation in the field of migration. In the Statement, in particular, the heads of the CIS states advocate the joint adoption of measures to destroy negative stereotypes about migrants and the inadmissibility of provoking conflicts on an interethnic and interfaith basis. Readiness is expressed to develop, implement and actively use national and international digital platforms to optimize the processes of registration of entry, stay and employment of migrants in the CIS member states.

At the meeting of the Council of CIS Heads of State, an Agreement was signed on the formation of the Council of Presidents of the Supreme (Higher) Courts of the Commonwealth Member States. It is assumed that the emergence of this body will increase the effectiveness of the exchange of experience between states on matters of judicial procedure, and will also contribute to strengthening cooperation in the field of justice. The Council will be responsible for determining the priority areas and forms of interaction of judicial bodies, promoting the implementation of international treaties and other acts in the field of legal cooperation adopted within the CIS, coordinating the interaction of judicial bodies of the Commonwealth countries in providing legal assistance, recognizing and authorizing the execution of judicial acts, organizing training and professional development of judges and court employees.

At the meeting, the heads of the CIS states determined the Cultural Capital of the Commonwealth in 2023. It will be the Moldovan city of Comrat.

In addition, the heads of the CIS states decided to appoint Yevgeny Sysoev to the post of head of the Anti-Terrorist Center of the member states of the Commonwealth of Independent States. Now he is the head of the Russian FSB Academy. Evgeny Sysoev will begin his duties in the CIS on January 1, 2022.

At the meeting of the Council, the heads of state signed an agreement on counteracting the legalization (laundering) of proceeds from crime, the financing of terrorism and the financing of the proliferation of weapons of mass destruction. The signing of the Treaty will contribute to strengthening international cooperation and expanding mutual assistance in this area, as well as resolving the issue of depriving criminals of the proceeds of crime and other means used to commit crimes.

The next meeting of the Council of Heads of State is scheduled to be held in October 2022 in Nur-Sultan. /// CIS, 15 Oct

First of all, let me express my gratitude to the leadership of the Republic of Belarus for organizing this meeting.

Joint events within the framework of the CIS this year, one way or another, are held under the sign of the great anniversary of the Commonwealth – the 30th anniversary of its foundation. 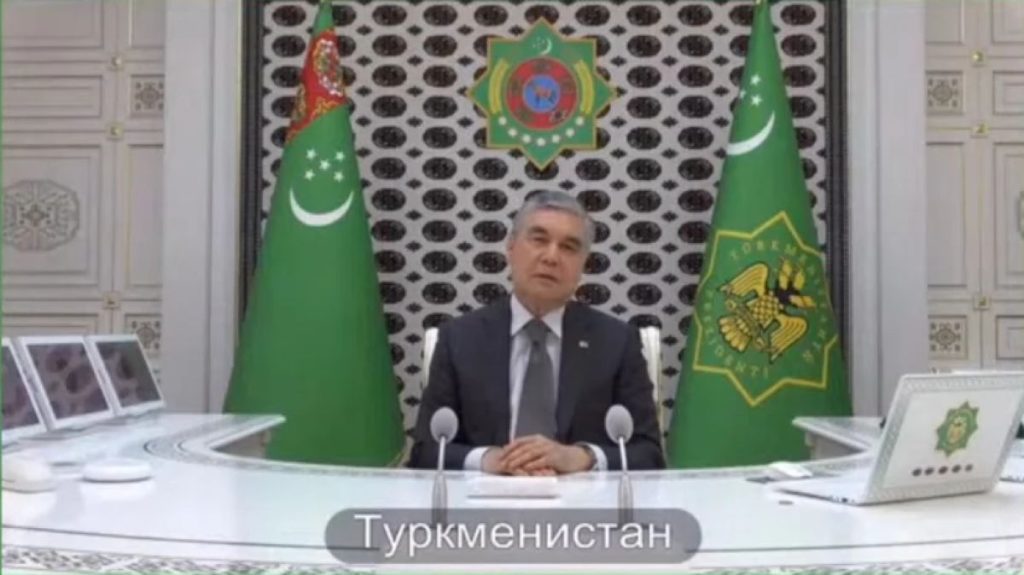 Of course, this date gives a special meaning to all our work today, demanding that it be commensurate with the experience accumulated during this time and at the same time with the prospects of the CIS for the coming years.

On the whole, I consider it necessary to emphasize that, despite the known difficulties, the activities of the CIS are being carried out consistently, in accordance with the statutory provisions and pre-approved schedules and plans.

In the coming years, the paramount task, in our opinion, is to build up economic interaction, use the aggregate industrial, resource and technological potential of the Commonwealth in order to achieve sustainable positions in global processes. The adopted Strategy for the Economic Development of the CIS until 2030 clearly defines the areas of cooperation.

Today the task is to fill this document with real content, and concrete deeds. Among the priorities in the Strategy are such areas as transport, fuel and energy complex, communications, industrial cooperation, trade, innovation and technology.

These are the sectors in which we can successfully compete in international markets and offer potential partners favorable conditions. In this context, we emphasize the importance of promoting the economic vectors and interests of the CIS beyond the geographical limits of the Commonwealth, integrating neighboring countries and neighboring regions into our projects. First of all, this concerns the creation of transport and transit infrastructure, the optimization and expansion of energy supplies, the laying of new communication lines and communications.

We believe that the decisive factor in successful cooperation in these areas is the active participation of the Commonwealth countries in the creation of sustainable transport and transit corridors along the North-South and East-West lines.

At various international forums with the participation of our countries, at the previous CIS Summits, Turkmenistan put forward a number of important initiatives to form transport and logistics hubs in the region of Central Asia and the Caspian basin with access to the European vector of the Commonwealth. They found understanding and support on the part of all CIS states, and today it is necessary to give these plans the proper impetus and specificity.

In April 2022, we plan to hold an International Conference of Ministers of Landlocked Developing Countries in Turkmenistan. For most of the CIS states, this is a topical topic. We look forward to the participation of our Commonwealth colleagues and a thorough practical discussion of the prospects for cooperation.

Among the most important areas of our interaction, Turkmenistan singles out joint protection of the existing architecture of global security, upholding the norms of international law and the UN Charter.

Now this task is more urgent than ever before. The course of future processes in the world, and the degree of risk of conflict situations depends on its solution. In these conditions, the CIS countries, using their political and diplomatic capabilities, are called upon to act from a consolidated and principled position in the UN and other authoritative international and regional structures.

It is necessary to return to world politics the respect for law, a culture of dialogue, trust and predictability in relations between states.

We invite the countries of the Commonwealth to participate in this event.

We see good prospects for interaction between the CIS countries and on a number of other topics on the international agenda. These are such urgent tasks as ensuring global and regional security, and achieving the Sustainable Development Goals. In these areas, we also consider it expedient to strengthen coordination of actions in the UN and at specialized international forums.

Of course, in the current conditions, one of the topical areas of joint activities of the Commonwealth countries is countering the coronavirus pandemic and minimizing its socio-economic consequences.

We believe that our states need to establish more effective mechanisms of interaction through scientific diplomacy and medical communities in order to develop common approaches and methods. In this regard, I would like to draw attention to the initiatives of Turkmenistan announced at the 76th session of the UN General Assembly.

Their main content is the creation of new multilateral mechanisms aimed at studying the nature of the origin of the new type of coronavirus, studying the forms of manifestation of diseases caused by them, developing and introducing new forms of treatment and prevention of infectious diseases.

We urge you to support these proposals and take part in their promotion at the UN platform.

The cultural and humanitarian sphere remains a solid and reliable bond of the states and peoples of the CIS.

We note with satisfaction that a lot has been done and is being done in this direction, cooperation is developing consistently, covering new areas. Most importantly, it enjoys the full support of the peoples of our countries. We are firmly focused on preserving and consolidating established ties, enriching them with new forms.

Turkmenistan is fully prepared to continue close cooperation within the CIS.

Today the Commonwealth is proving its viability, ability to responsibly cope with challenges and threats, and serves as an important instrument of interstate dialogue. We see this as a key condition for further joint work.

Concluding my speech, I would like to wish success to the Republic of Kazakhstan in exercising its chairmanship in the Commonwealth next year.

I would also like to express my gratitude to the head of the Executive Committee – CIS Executive Secretary Sergei Nikolayevich Lebedev for the effective coordination of our work and contribution to the successful holding of this meeting. /// nCa, 18 October 2021 (combining stories of CIS Secretariat and TDH, 15 Oct)