Home » In memory of the outstanding composer Recep Rejepov

With the passing of an outstanding composer, People’s Artist of Turkmenistan, Laureate of the State Prize named after S. Makhtumkuli Rejep Djumaevich Rejepov, the culture of Turkmenistan has suffered an irreparable loss. 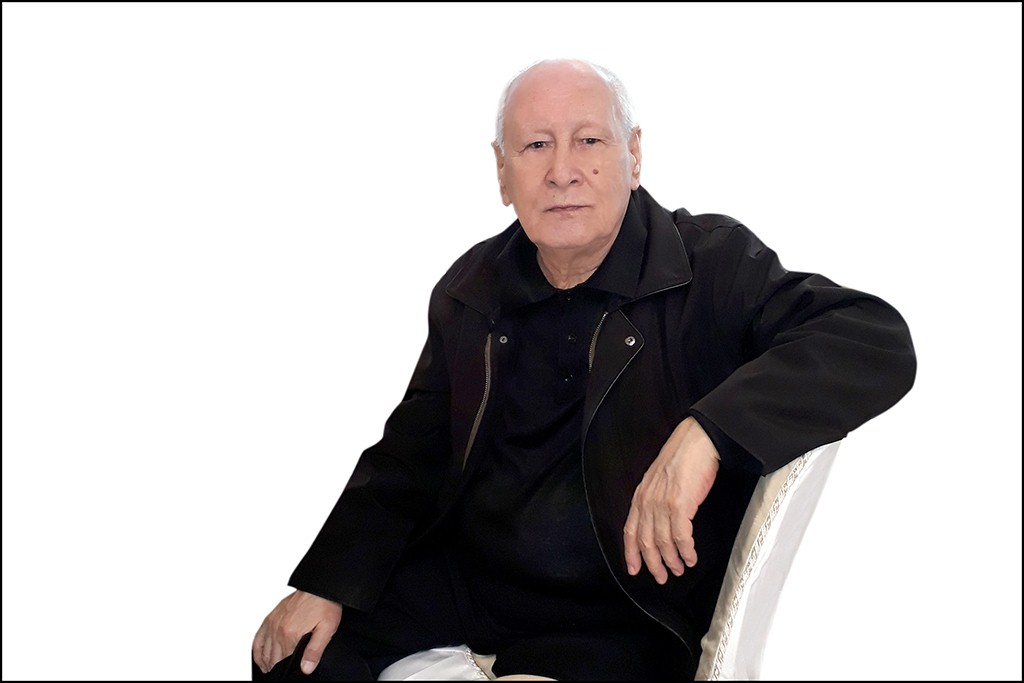 Recjp Rejepov is the author of two operas: “Gerogly” and “Tales of the Karakum Wind”, symphonic and vocal-symphonic works, as well as music for dozens of films! The Turkmen people will sing hundreds of songs on his melody for a very long time. Rejep Dzhumaevich entered the musical life of the country in the 70s of the last century, when a surge of composers’ talent was felt on the Turkmen venues – Nury Khalmamedov, Aman Agadzhikov, Chary Nurymov, Recep Allayarov … He communicated with them, made friends, collaborated and kept in memory of their bright images, and since he was also a good storyteller, he recalled with pleasure about the unforgettable meetings that fate gave him.

In memory of the remarkable composer, gifted teacher, charming and extremely tactful person, Rejep Djumaevich, we offer our readers material that was prepared in advance by our editorial staff for his upcoming chamber concert.

Rejep Rejepov was born in a small town in the west of the country – in Kizil-Arvat (now Serdar). Nothing foreshadowed the formation of his career as a composer. His father was a famous carpet artist, and his mother, like most women in Kizilarvat, was a skilled carpet weaver. But by those standards, their family was considered progressive – they even had a gramophone. On one side of the only disc was an overture to the opera “Carmen” by Georges Bizet, on the other – “Dance with Sabers” by Aram Khachaturian. Marvelous music transported the 6-year-old boy to another fabulous and magical world. He even tried to come up with different stories of life accompanied by passionate sounds, not realizing yet that they are called librettos. 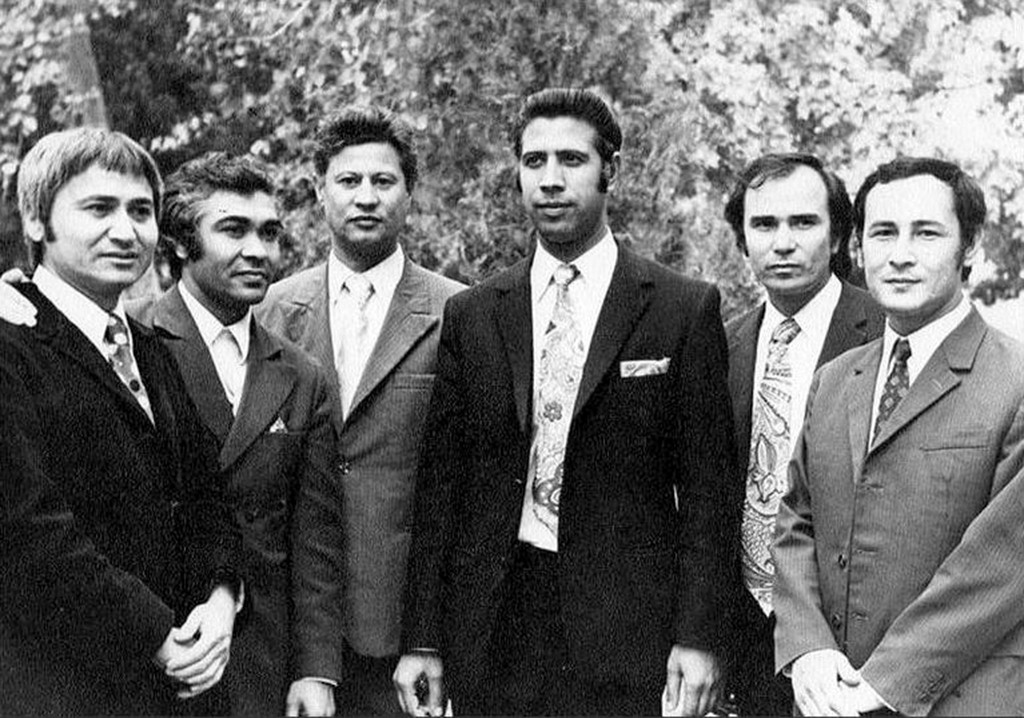 When Rejep was 12 years old, his father noticed how cleverly his son was picking up music on a homemade pipe. Incredibly, an ordinary hollow stick with holes suddenly emits a familiar Turkmen song! Yes, it’s a talent! And dad, looking forward to summer, took his son to Ashgabat to the Republican Music Boarding School. It was 1956. Rejep Rejepov was admitted to the wind instrument department in the trumpet class, and he joined the group of musically gifted children. He was very lucky with the teacher Durdy Nuryev, who gave good advice; even then, Rejep began to compose music and he needed good mentoring. The Kizilarvat boy studied with only A’s in both special and general education subjects, which allowed him, having successfully completed the third grade, pass the exams for the fourth and go straight to the fifth grade.

In the direction of the RMSH, the excellent student Rejep Rejepov enters the Turkmen State Music College named after S. Danatar Ovezov. His teacher Durdy Nuryev, by the way, is a very good pianist, he also worked at the school, and in addition, there was an opportunity to take valuable advice from Ashir Kuliev and Heinrich Drzhevsky. Studying the trumpet class, student Rejepov composes several pieces for piano. In his fourth year, he writes a number of plays, which he combines in the “Children’s Album”. His second “Children’s Album” became widely known, which included piano miniatures “Remembrance”, “March of Grasshoppers”, “Meditation”, “The Doll was Bought”, “Lullaby” and others. In parallel, he composes songs and romances – “Clouds”, “You”, “Song of the Fathers”, “Flower”, “Why” and others.

Student years at the Music College named after Danatar Ovezov was very rich in creative and educational growth for Rejep Rejepov. In addition to his studies, he worked in the orchestra of the Opera and Ballet Theater. Makhtumkuli. And this was also a good school of professionalism for him. 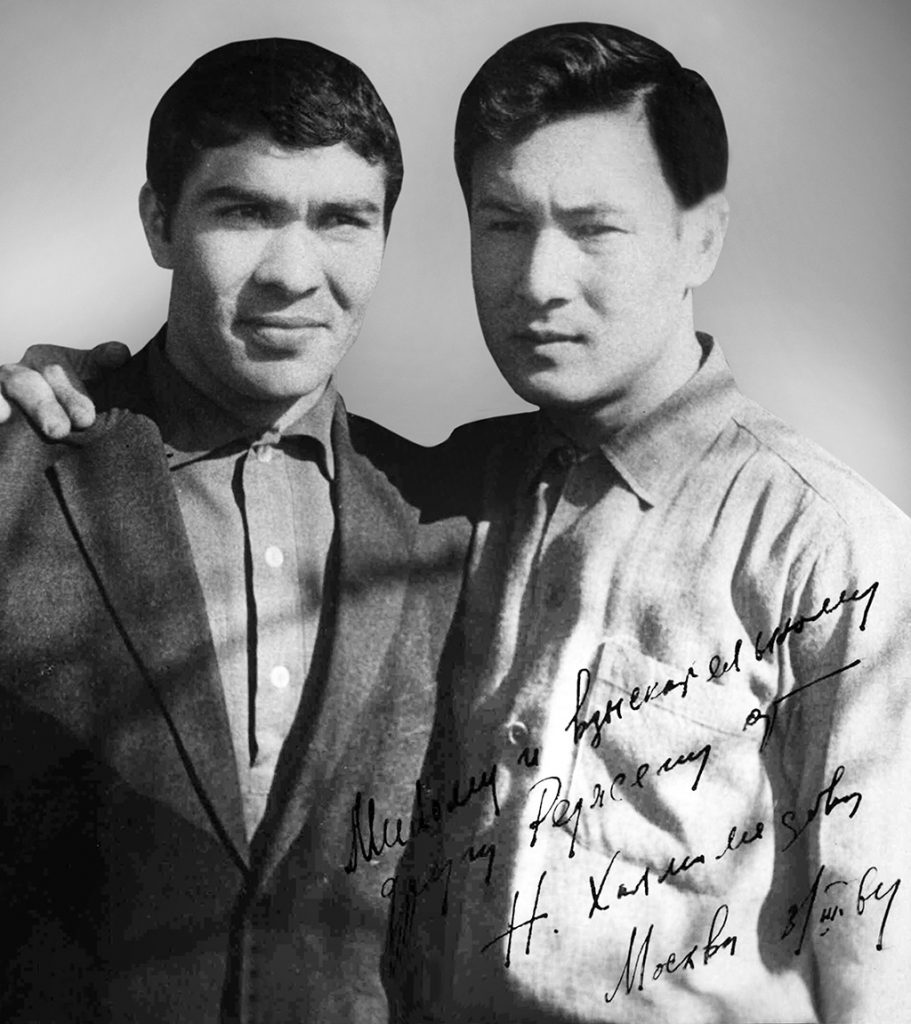 “I spent hours attending rehearsals,” recalls Rejep Djumaevich. – I knew all the operas by heart. I saw how famous vocalists Maya Kulieva, Annagul Annakulieva, Khoja Annayev, conductor Hydyr Amannurov, composer Nury Mukhatov work. It may sound pompous, but they were truly an example of selfless service to their profession, both for me and for everyone who visited the theater.

Rejep Rejepov graduated from the music school named after Danatar Ovezova also with honors and goes to study at the Moscow Conservatory P.I. Tchaikovsky, and not by the class of the trumpet, but by the class of composition. It was here in Moscow that he met Nury Khalmamedov: the freshman Rejepov arrived at the conservatory, and the graduate Khalmamedov left it. 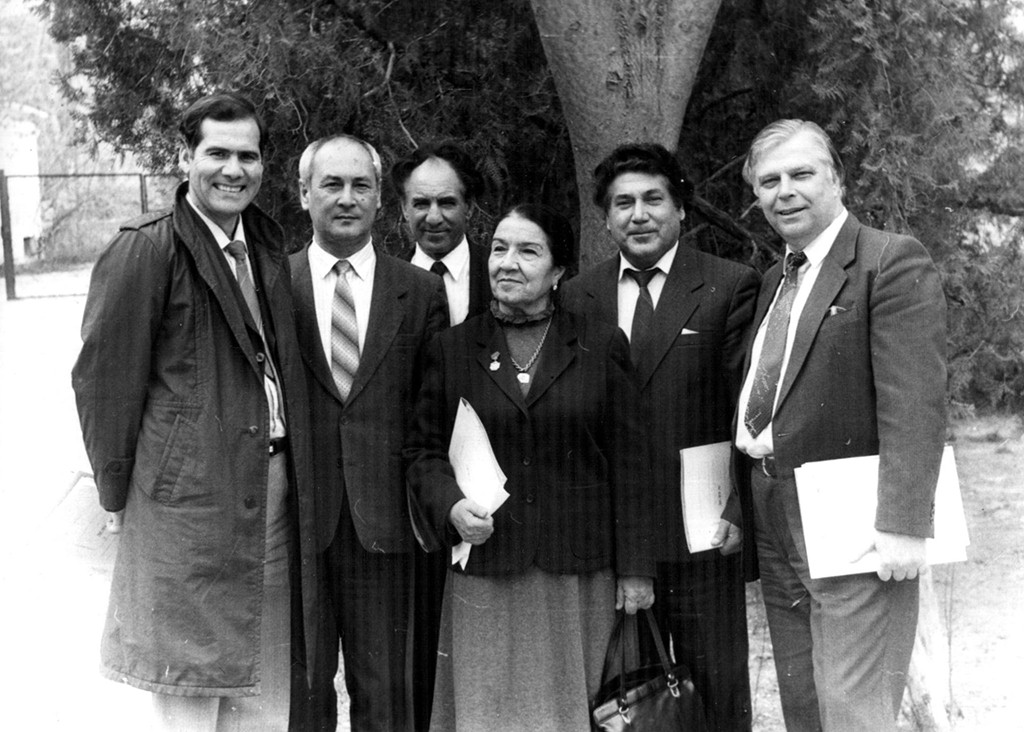 Here he was found at that time by a novice and very promising film director Bulat Mansurov, who, having heard Rejep Rejepov’s romance about Makhtumkuli, decided to meet his talented fellow countryman. “We will definitely cooperate,” Bulat Mansurov summed up the conversation with confidence.

– The music for Bulat Mansurov’s film “Competition” was written by Nury Khalmamedov, – says Rejep Dzhumaevich. – By that time we became friends, and he allowed me to be present at the sound recording of his music for this film. I was submissive, fascinated and in love. This love has survived in me to this day. And Nury Khalmamedov has become my spiritual teacher since then. Once he invited me to the Bolshoi Theater for the ballet Romeo and Juliet. Impressed by the music of Sergei Prokofiev, we returned from the theater to the Turkmen permanent mission without uttering a word.

Nury Khalmamedov insisted that I introduce him to my works. I showed him “The Lonely Path” to the words of Ata Atajanov, “Be with me” and “Armanym” to the lyrics by Alta Akmamedov.

I remember a funny incident that happened with one of my songs. In 1963, having arrived in Ashgabat for a vacation, I went to the Union of Composers and met there with Danatar Ovezov and the poetess Annasoltan Kekilova. They asked me to write a melody for the song “I was looking for you” and gave me the lyrics. On the same day I wrote the music. By the way, this song is still sung. And a funny case is that 25 years later, an expedition to collect song folklore worked in the outback and met a shepherd playing the tune of the song “I was looking for you” on a pipe. 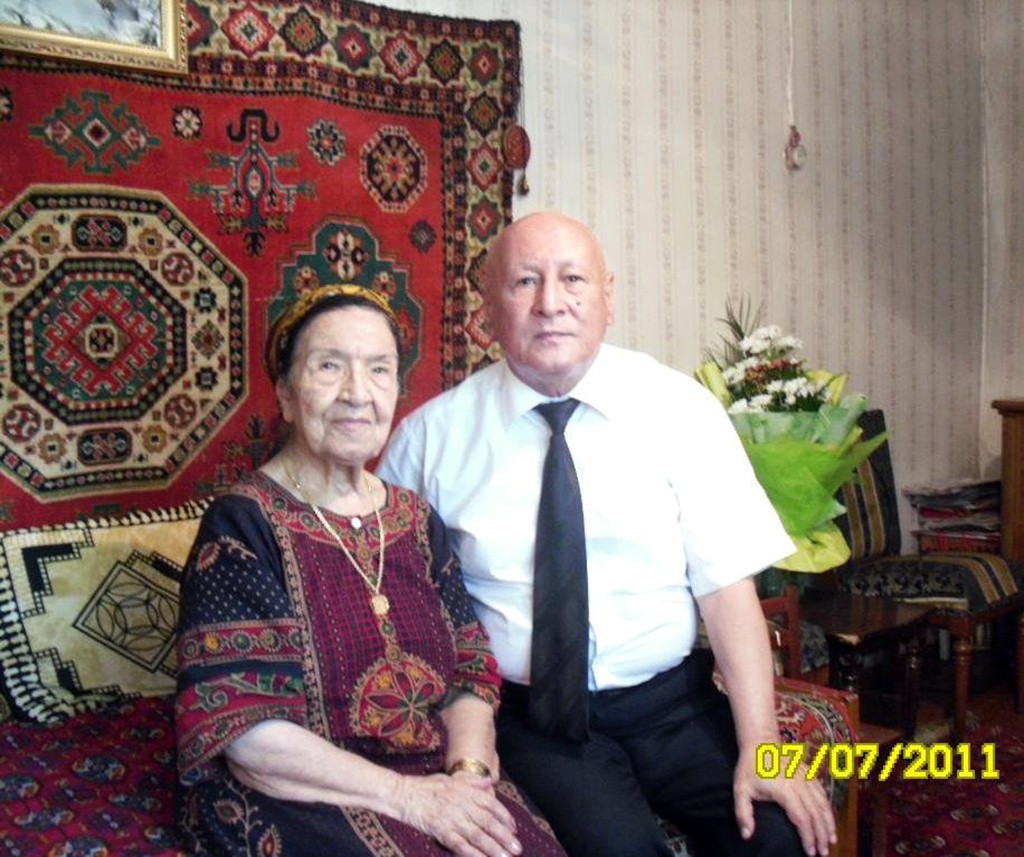 – Nothing of the kind, I have been playing this song all my life, it is very popular, – the shepherd insisted.

My song is passed off as a folk song – I, perhaps, have never heard a higher praise for my creativity than this one. Bulat Mansurov was right when he told Rejep Djumaevich: “We will definitely cooperate.” Indeed, Rejep Rejepov became a composer in two films by Bulat Mansurov – “Quenching Thirst” based on the novel by Yuri Trifonov and “Slave” based on the story by Andrey Platonov. These two films marked the beginning of a huge stage in the work of Rejep Dzhumaevich – film music. He thoroughly studied the technique of this genre, its tasks and capabilities: music is intended to lyrically or dramatically convey the plot of a film, emphasize the depth of the characters’ experiences, create, depending on the theme, the mood of the audience and thereby enhance the depth of the director’s intention.

Rejep Rejepov has done a lot for the Turkmen cinema, he is the author of music for 59 films! It is thanks to his talent that the music in the film “Jemal Tree” sounded so tender and melodious. Rejep Rejepov is the author of two operas. The history of writing the first opera “Tales of the Karakum Wind” is as follows.

“Before going to bed, I let the children listen to a disc with the tale “Ali Baba and 40 thieves” staged by Veniamin Smekhov,” says Rejep Dzhumaevich. And once an idea was born, what if we make the same staging based on the Turkmen fairy tale “Yartygulak”. I needed a libretto, and I went to Moscow to the Taganka Theater, where the actor Smekhov served.

– No! No! No! – at first Veniamin Borisovich categorically objected, – there is absolutely no time. And then, having met a handsome Turkmen hero, he agreed to keep the fairy tale. After 2 months, he called:

– Your order is ready!

The libretto of the Turkmen fairy tale in Russian was incomparable. I created music with enthusiasm, but I never managed to stage an opera. Now the translation into Russian is irrelevant. I have a dream – to translate the libretto of Veniamin Smekhov from Russian into Turkmen and let our children enjoy the “opera” Yartygulak. But this requires a poet who will make a good translation, until I find one.

The birth of the second opera “Gerogly” also has an unusual history. Danatar Ovezov began to write it, but he left us without finishing the work. Nury Khalmamedov undertook to complete it, but he did not manage to do it either. And then I gave myself my word: “I will be alive and well, I will bring the dream of my dear composers to the end.” In 1999, the opera “Gerogly” was staged at the Theater of Opera and Ballet Makhtumkuli.

In memory of Nura Khalmamedov, I dedicated the Quintet-Poem for string quartet and piano.

Rejep Rejepov for many years, since he graduated from the conservatory, has been teaching a composition class at the Turkmen State Musical College named after Danatar Ovezov. He speaks very well of his students, saying that they give him great hope. But I did not want to single out someone separately, so as not to offend others. But he named his favorite singer – People’s Artist of Turkmenistan Atageldy Garyagdyev, and even pointed out the reason: “He was the first performer of my songs, and my mentor Nury Khalmamedov loved him just like me”.

From the Editor: We will really miss this finely-feeling composer, who bewitches listeners of all ages with the melody of his works. And, of course, we would like the dream of Rejep Dzhumaevich to come true, and the Turkmen children finally heard how the most courageous and fair fabulous tomboy Yartygulak sang. /// Originally published by TDH, 11 Jan