The government of Turkmenistan undertakes a number of significant efforts to maintain an adequate water supply for the agro-industrial sector, the population, and industrial enterprises. At the same time, the main emphasis is on the use of science-based advanced methods of irrigation, water use, construction of hydro facilities.

Artificial pastures on the banks of the collectors of Altyn Asyr Lake
Turkmen scientists are developing methods for enhancing the fodder base of the livestock industry, including for transhumance sheep and camel breeding. The aim is to study the possibilities of locating irrigated plots near the collector and drainage network of the Altyn Asyr Turkmen Lake. 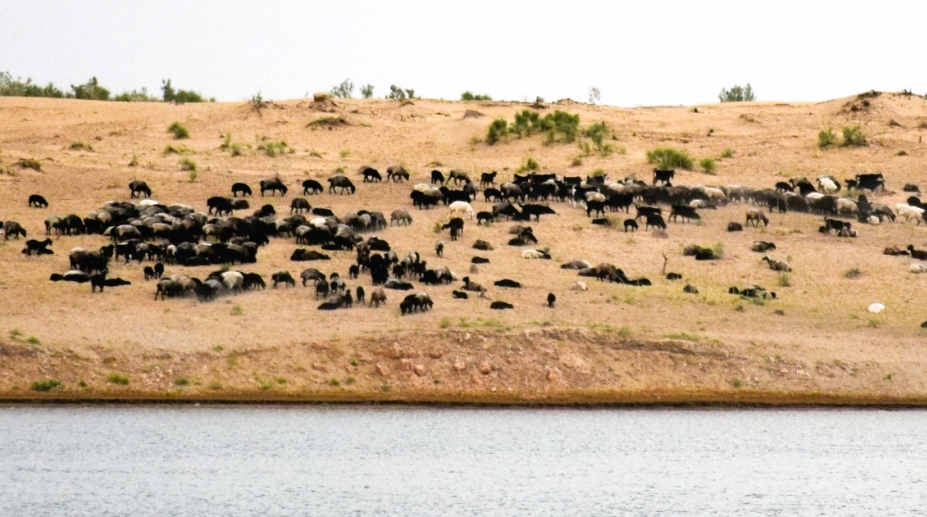 Tylla Jumanazarova, head of the laboratory for irrigation and land reclamation of the State Water Research and Production and Design Institute “Türkmensuwylymtaslama” of the State Committee for Water Resources of Turkmenistan, told the newspaper “Neutral Turkmenistan” about research activities in this area.

“The current scientific work concerns the development of the territory adjacent to the lake by growing fodder crops, including natural vegetation of the Karakum desert, with irrigation by various methods – drip, sprinkling, surface, and rain-fed for comparative analysis,” the researcher said.

Under natural conditions, white saxaul and kandym are grown in the Karakums. The survival rate of plants is 50-60%, which is typical for desert conditions. But with surface watering, the number of adapted plants increases to a maximum.

Work is underway on two experimental sites. One is located in the area of the Ak Yayla reservoir, and the other one is 33 km far from Ashgabat on the highway leading to Dashoguz.

On the first site, white saxaul, cherkez and kandym are grown, and on the second site, fodder licorice is also cultivated on sandy loam soils.

In field studies on the restoration of desert vegetation, collector-drainage water with a mineralization level of 2-3 grams per liter is used for irrigation. It is believed that such water is acceptable for irrigation of industrial and fodder crops.

Institute researchers carry out biometric measurements and phenological observations of the state of plants at the sites, as well as measure fluctuations in water salinity. Irrigation water consumption through droppers is recorded, which is 4 liters per hour and provides the necessary moisture in the calculated soil horizons.

“In the future, it is planned to develop a new technology for surface irrigation using a water flow control device in arid climate conditions,” Jumanazarova said.

The scientists also confirmed the effectiveness of surface irrigation, which creates an optimal moisture regime that ensures the growth and development of plants in accordance with their water consumption.

With drip irrigation, the root system is maximally moistened, and the roots literally stop looking for water in the deep layers of the soil. Thus, the root system remains weak and ceases to perform its natural function of fixing the sands.

Where can saline drainage water be used?
The staff of the scientific department of the Institute “Türkmensuwylymtaslama” has developed a collection of methodological guidelines for the use of the waters of the Turkmen lake “Altyn Asyr” and its reservoirs. The handbook contains tables of changes in the salinity of collector drainage water.

As scientists have found out, the mineralization of collector-drainage waters in the reservoirs leading to the main reservoir of the lake varies by region.

The lowest salt concentration is in the Lebap province – less than 2 grams per liter, the highest indicator has been fixed in the Akhal – the salinity is 12 g/l.

“As a result, the waters of different collector threads mix, increase and decrease mineralization. Closer to the mouth in Ai Yayla, the salinity of the waters decreases with the arrival of the waters of the Dashoguz branch, and stabilizes at the level of 8-9 g/l. For comparison, the Caspian Sea has a mineralization of about 14 g/l,” explained Georgy Kurtovezov, head of the Laboratory of Hydraulic Engineering and Water Use of the Institute.

Traditionally, fresh water is used for irrigation of crops, the mineralization of which is 1 g/l.

However, the scientists have concluded that collector-drainage water in combination with fresh water can be used in agriculture and animal husbandry. Thus, mineralized drainage waters are suitable for use in the following areas:

There are two ways to solve this problem. The first one and most expensive is constant cleaning by dredgers, deepening shallow areas, building up the walls of water reservoirs and dams.

The second method is the construction of a new reservoir at another location, which serves as a kind of holding basin for the precipitation of silt and sand. Then the water is supplied to drinking, industrial and agricultural needs.

This role is performed by the oldest and largest reservoir in the country – “15 years of independence” (former Zeyid reservoir), launched back in the 1980s. The reservoir’s capacity is 2.2 billion cubic meters of water. It ensures the planned passage of water from the Amu Darya along the Karakum River to the Mary, Akhal, and Balkan provinces.

After fixing the signs of siltation of this reservoir, it was decided to build a new reservoir nearby to replace the old one. The first stage of the project was completed in 2015, the reservoir is designed to store 1.2 billion cubic meters of water. This water is used for the needs of agriculture, industry, for household purposes.

Nowadays, the second phase with a capacity of 1.6 billion cu m is being built. This facility will be put into operation in 2028, and the third stage is being designed simultaneously.

In the future, the total capacity of the reservoir system will reach 3.8 billion cu m.

In general, Turkmenistan has 16 reservoirs with a total volume of 3.5 billion cubic meters of water.

The devices are fixed on a cane installed across the riverbed and do not touch the water. They calculate how much water passes through the width and depth of the riverbed, the speed of the water, the water level in various locations, warn of overflow of the riverbed.

The obtained data is used to make management decisions in the field of water distribution.
///nCa, 11 July 2022 (based on materials of Neutral Turkmenistan newspaper)