You are here: Home / Articles And Reports / Turkey’s Day of Elation 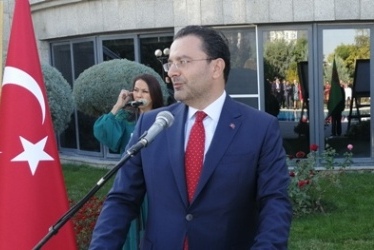 The 98th Anniversary of the proclamation of the Republic of Turkey was celebrated in Ashgabat, Turkmenistan’s capital city with ceremonial events on 29 October.

The ceremonies started with the Republic Day celebration program prepared by the students of the Turkmen-Turkish Joint Education School in Ashgabat. Then, Mr. Togan Oral, Ambassador Extraordinary and Plenipotentiary of the Republic of Turkey to Turkmenistan, hosted a Republic Day Reception at the garden of the Ambassador’s Residence.

Addressing the guests after the national anthems of the two countries were sung, Ambassador Togan Oral, with reference to the fact that Turkey was the first country to recognize the independence of Turkmenistan and to open the first Embassy in Ashgabat, said that he had the privilege of using the first vehicle with a diplomatic license plate, ever issued for foreign diplomatic missions in Ashgabat.

He underlined that it is an expression of the support and solidarity that Turkey has shown to friendly and brotherly Turkmenistan since the first day the country gained its independence.

Reminding that Turkmenistan is also celebrating the 30th Anniversary of its independence this year, Ambassador Togan Oral said, “On this occasion, we celebrate two festive events together. When I was appointed as Ambassador to Ashgabat, the first priority I set as a mission to our Embassy was to strive for elevating the already excellent Turkish-Turkmen relations to the highest possible level. Since then, despite the pandemic conditions, we have held many high-level bilateral meetings both with physical participation and through video-conferencing. We have showed strong solidarity with each other in the fight against infectious diseases. Ours is not a kind of fair-weather friendship; but a brotherhood that extends from the past to the present and will continue forever.”

Ambassador Togan Oral stated that Turkmenistan’s accession to the Council of Turkish-Speaking Countries as an observer member constitutes the most meaningful development since he started his duty in Ashgabat, and that with the participation of Turkmenistan in the Turkic Council, of which Turkmenistan is already a natural member, the family picture of the brotherly Turkic States will be completed.

“It is envisaged that His Excellency Gurbanguly Berdimuhamedov, President of Turkmenistan will attend the 8th Summit Meeting of the Heads of State of the Turkic Council, which will be hosted by Turkey in the coming days. Thus, the meeting for which we have been waiting a long time will take place.” Ambassador Oral added.

In his speech, Kasymguli Babayev, Deputy Chairman of the People’s Council of Turkmenistan, chaired by President Gurbangulu Berdimuhamedov, congratulated the 98thanniversary of the proclamation of the Republic of Turkey with the most sincere wishes on behalf of the President of Turkmenistan and the Turkmen people.

He stated that the people of Turkmenistan and Turkey shared the same religion, language and historical roots; that since its independence Turkmenistan had developed cooperation with Turkey in every field; that there were strategic relations between the two countries; and that there was also a sincere dialogue between the Presidents of the two countries.

In the afternoon of the same day, Ambassador Togan Oral organized a separate reception at the garden of the Ambassador’s Residence for the representatives and members of the Board of Directors and Executive Board of the International Transporters Association, Çalık Holding, Rönesans Holding, GAP, NATA and Polimeks Construction, Coca Cola Turkmenistan (a subsidiary of Anadolu Group), Turkmen Turk Commercial Bank (a subsidiary of Ziraat Bank), Turkish Airlines companies, and teachers of Turkmen-Turkish Joint Education School, and the members of the Turkish Embassy in Ashgabat.

Speaking at the aforementioned reception, Ambassador Togan Oral said that the Republic of Turkey was established at a time when hopes were fading, the Turkish nation joined forces in faith, perseverance and determination. Expressing that it is necessary to continue working with the same spirit of resolve and determination in order to elevate the Republic, entrusted by Atatürk for safekeeping, to the highest possible level. Ambassador Togan Oral told, “Our Atatürk expressed the goal he set for future generations in his own words: ‘Rise Turk, there is no limit of height for you.’ That’s why we will strive with all our might to carry our Republic to the highest level and beyond the current civilization.”

During the celebrations, the Republic Day message of H.E. Recep Tayyip Erdoğan President of the Republic of Turkey, was read in Turkish and Russian languages. /// nCa, 1 November 2021 (in cooperation with Embassy of Turkey in Turkmenistan)

Here are some pictures from the reception hosted by the ambassador of Turkey in Ashgabat: 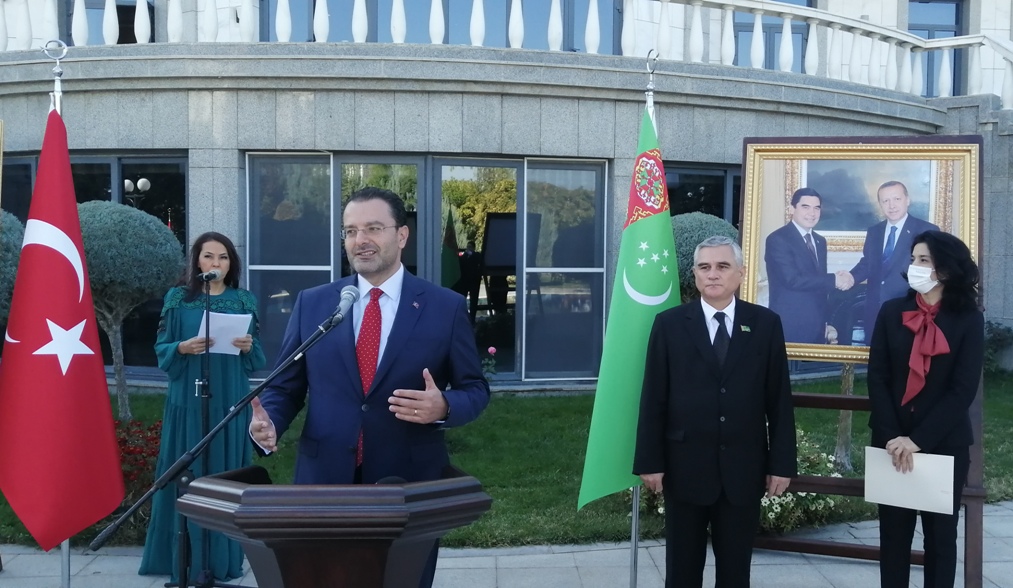 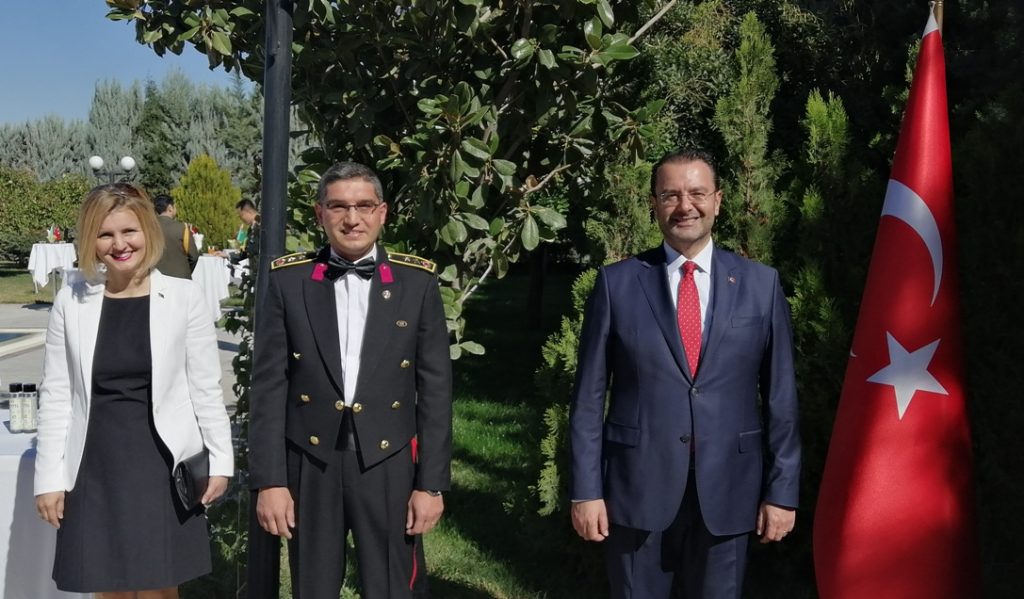 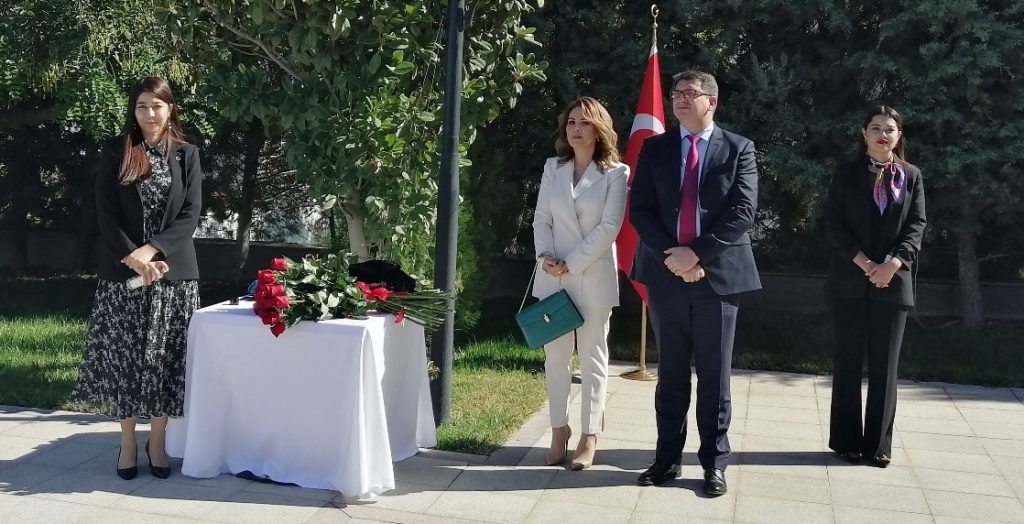