You are here: Home / Articles And Reports / Brexit bombshell and Central Asia

Ashgabat, 25 June 2016 (nCa) — The ‘Leave’ vote in the hotly contested Brexit referendum is a big surprise for all, especially those who were campaigning for it.

It will take a while, perhaps two months, to fully comprehend the scope of this decision and how it will impact Central Asia.

In the parlance of Game Theory, it looks like a negative-sum model, where everyone is a loser. At least, that is what short-term scenario looks like. What happens later will depend entirely on the sequence of decisions taken by the leaders within the UK and the EU.

Looking from Central Asia, a region that has no direct borders with the EU but gets affected frequently by the political, economic and military decisions of EU, there is the need to understand a few things.

First, the Central Asian decision-makers should register that many voters entered the booth with a foggy idea of their choice. Quite a few of them regret the choice they made. They are not to blame. Much of the campaign, from both sides, was run on the strength of fear rather than merit. In the last stage of the campaign, the fear mongering turned into outright threats, particularly by the EU leadership.

Second, the EU leadership and some banking and financial institutions, who are responsible for much of what ails EU today, are behaving in a most irresponsible manner now. The EU leaders are asking the UK to ‘get out immediately’ and the banking institutions are threatening to relocate out of the UK at the earliest. Clearly, there is the desire to punish the people for daring to exercise their right of free choice. There is also the aspiration to make the withdrawal of the UK as painful as possible to deter others from leaving the EU.

Article 50 of The Lisbon Treaty governs the procedure for the members that want to quit the EU:

A qualified majority shall be defined in accordance with Article 238(3)(b) of the Treaty on the Functioning of the European Union.

As can be seen from the text of this article, the process of departure can take up to two years and even that period can be prolonged with mutual consent. However, the frustrated, shocked and humiliated EU leadership wants the UK to leave ASAP. If this is their attitude toward a country that stood through thick and thin with them for 43 years, that voluntarily exposed its economy to unnecessary shocks emanating from flawed policies of the EU, that took migrants and guest workers from the member states who played havoc with the system and the society, what should Central Asia expect from them?

Moreover, the historic fact is that Charles de Gaulle of France vetoed the UK membership application to EEC twice – in 1963 and 1967. It was only in 1969 that the UK succeeded in getting the green signal and joined in 1973.

The other side of the coin is that there are huge pockets of resentment against the UK in the mainland Europe. Some people think that the UK behaved in an ungrateful manner despite getting special treatment on several occasions.

Third, the UK is not the only one fed up with the shenanigans of this noxious club. We may hear the calls for similar right of choice from Greece, France, Germany, Spain, the Netherlands, Sweden, even Italy, Denmark and Austria. It must be noted that France, Germany, Italy and Netherlands are among the six founding members of the EEC – Common Market – under the Treaty of Rome 1957. There must be something very wrong when even the founding members could be looking for a way out.

However, the dissolution of the EU is not inevitable. In fact, with right choices, the union can be made stronger and more viable. Whether the current leadership of the EU has the vision and wisdom to do that is a question that will answer itself in the coming weeks and months.

Fourth, based on the rising popularity of the far right across Europe, the resentment against the migrants, and the immature rhetoric of the politicians and the media, it can be said that if the EU doesn’t disintegrate, it will quite possibly turn inward. This will redefine the available areas of interaction with the EU that may come to resemble the turtle hiding inside its hard shell.

Fifth, Central Asia needs to look at the map of voting pattern for Leave or Remain vote in the UK. 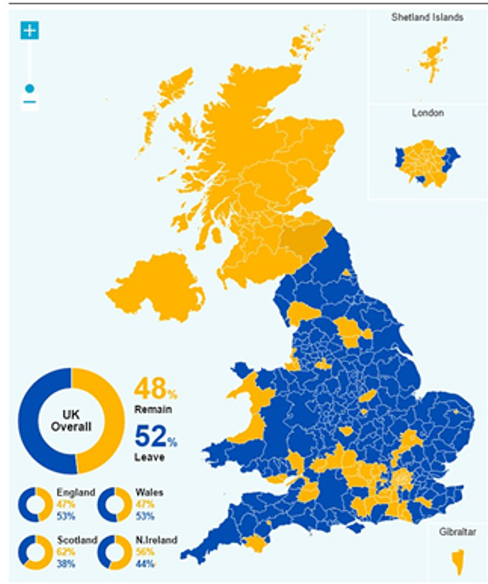 The country is neatly divided geographically, regardless of party affiliations. Scotland and London were clearly not in favour of Leave.

This may lead to the possibility of a second round of the referendum based on certain technicalities, mostly kind of an afterthought. The people calling for a fresh referendum argue that the Leave vote amounted to less than 60% and the voter turnout was less than 75%, hence the outcome is not truly decisive. If that actually happens, though it won’t, the Remain vote is quite likely to succeed. The petition for the new referendum had gained more than 500000 signatures already within hours of its posting on Friday. It means that the parliament will be obliged to debate it no matter how unrealistic the desire for another referendum.

Simultaneously, Scotland may demand independence on the grounds that it is being taken out of the EU against its will. In fact, there are calls already for London and Scotland to secede from the UK. The liberation of London may be a farfetched idea but Scotland has already indicated the strong possibility to holding independence vote again. There may also be the resurfacing of the question of Irish reunification. Not only the EU but the UK itself faces potential disintegration.

To be on the safe side, Central Asia should take the following measures immediately: