Foreign Minister of Pakistan Shah Mahmood Qureshi embarked on touring neighbor countries of Afghanistan. He has already visited Tajikistan and Uzbekistan on 25 August 2021 and will call on Turkmenistan and Iran.

Here are some details of the visits, as informed by the foreign ministry of Pakistan and other official sources:

On the regional security situation, the Foreign Minister shared Pakistan’s perspective on the latest situation in Afghanistan. Highlighting that both Pakistan and Tajikistan would benefit immensely from a peaceful and stable Afghanistan in terms of enhanced economic cooperation and connectivity, the Foreign Minister underlined importance of coordinated approach to realise shared objectives of a connected region.

President Emomli welcomed Foreign Minister and concurred on coordinated approach on the evolving situation in Afghanistan. He said that he looked forward to receive Prime Minister Imran Khan at SCO Summit in September 2021 in Dushanbe.

The same day, Qureshi met Foreign Minister of Tajikistan Sirojiddin Muhriddin at the Ministry of Foreign Affairs of Tajikistan.

During the meeting, the two Foreign Ministers welcomed the frequent high level interaction which had led to further strengthening of bilateral relations and commonality of views on matters of mutual interests.

Foreign Minister Qureshi appreciated Tajikistan’s leading role during its Presidency of SCO and remarked that Prime Minister was keen to visit Tajikistan for the upcoming Summit in September 2021.

The two Foreign Ministers also reviewed the latest developments in Afghanistan. Foreign Minister Qureshi apprised his Tajik counterpart of Pakistan’s policy to support an inclusive political solution in Afghanistan and expressed hope that Afghan leaders would achieve a workable solution. He also underscored the importance of continued international engagement as shared responsibility.

The Tajik Foreign Minister appreciated Pakistan’s initiative to reach out to neighbours of Afghanistan for a coordinated approach.

The two Foreign Ministers agreed to remain in close contact. ///based on press releases of MFA Pakistan

Press release of the press service of Tajikistan president:

The Founder of Peace and National Unity — Leader of the Nation, President of the Tajikistan Emomali Rahmon received the Minister of Foreign Affairs of the Islamic Republic of Pakistan Shah Mahmoud Qureshi.

The meeting took place in the Palace of the Nation.

A wide range of issues related to the development and further expansion of bilateral cooperation of mutual interest were the main items on the agenda. Preparations for the upcoming official visit of the Prime Minister of the Islamic Republic of Pakistan Imran Khan to Tajikistan was also touched upon.

Officials also paid special attention to certain pressing items on the international and regional agenda, in particular the current situation in Afghanistan.

Today, one of the major threats to regional security is the current situation in Afghanistan, which is on the brink of a humanitarian catastrophe as a result of the withdrawal of coalition forces.

The dangerous situation that has developed in this country in recent days is not only the problem of the Afghan people, but also one of the most pressing regional and global issues today. Taliban’s rise to power has further complicated the geopolitical process in the region.

Evidence clearly shows that the Taliban are abandoning their previous promises to form an interim government with the broad participation of other political forces in the country and are preparing to establish an Islamic emirate.

Tajikistan strongly condemns all forms of lawlessness, murder, looting, and persecution of the Afghan people, especially Tajiks, Uzbeks, and other national minorities.

The officials stressed that Afghanistan should not be dragged back into the whirlpool of bloody imposed wars.

As a close neighbor, Tajikistan has always supported the restoration of lasting peace and stability in Afghanistan and remains committed to this position. In order to urgently address the political and security problems of the neighboring country, it is necessary to establish an inclusive government with the participation of all national minorities, especially Tajiks in Afghanistan, who make up more than 46% of the population.

The state structure in this neighboring country should be determined by referendum and taking into account the position of all citizens of the country.

Tajikistan will not recognize any other government that is formed in this country through oppression, without taking into account the position of the entire Afghan people, especially all its minorities. They also stressed that Tajiks have a worthy place in the future government of Afghanistan.

Tajikistan calls on the international community to take urgent measures to ensure peace and stability in Afghanistan and to stabilize its difficult political and security situation through negotiations as soon as possible.

The international community’s indifference to the current situation in Afghanistan could lead to a protracted civil war.

Tajikistan is committed to the restoration of peace, stability and security in the neighboring Afghanistan as soon as possible, and believes that the United Nations should play a key role in advancing this process.

On the basis of the experience of civil war, peace, and national unity of Tajikistan, President Rahmon has proposed a number of ways to the Pakistani side for ensuring peace, stability, and further sustainable development of the neighboring country.

The Foreign Minister conveyed warm greetings from Prime Minister Imran Khan and referring to the Prime Minister’s visit to Tashkent in July 2021, reiterated commitment to enhance bilateral ties in all areas of mutual interests. Foreign Minister Qureshi apprised the President of Uzbekistan on the latest situation in Afghanistan and expressed hope that the Afghan leaders would work out an inclusive political solution which would lead to stronger trade and economic ties and strengthen linkages between the people in the region.

President of Uzbekistan Shavkat Mirziyoyev welcomed the Foreign Minister and termed relations with Pakistan important. He remarked that Uzbekistan was keen to develop ties with Pakistan in all areas, particularly in transport and connectivity. He also concurred that regional connectivity, trade and economy will be further enhanced with the peace in Afghanistan. He also looked forward to meeting Prime Minister Imran Khan on the sidelines of forthcoming SCO Summit in Dushanbe next month to discuss issues of mutual interest.

Foreign Minister Qureshi exchanged views on ways and means with his Uzbek counterpart to intensify bilateral relations in all areas. The two Foreign Ministers agreed that in view of recent frequent high level exchanges, bilateral relations have transformed into a strategic partnership. It was decided to follow up closely the implementation of decisions, taken during the recent visit of Prime Minister Imran Khan to Uzbekistan. 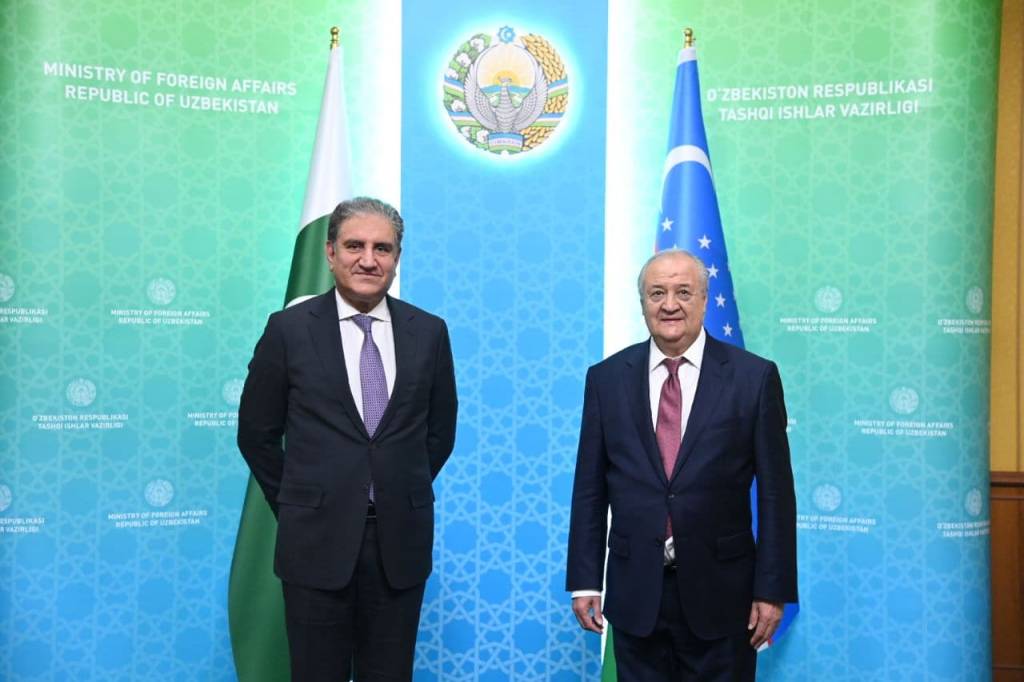