OGT, the flagship event of the oil and gas industry of Turkmenistan, started on Wednesday, 12 May 2021, in Ashgabat.

This year it is titled ‘OGT 2021 – International Investment Forum.’ — OGT is acronym for Oil and Gas of Turkmenistan. 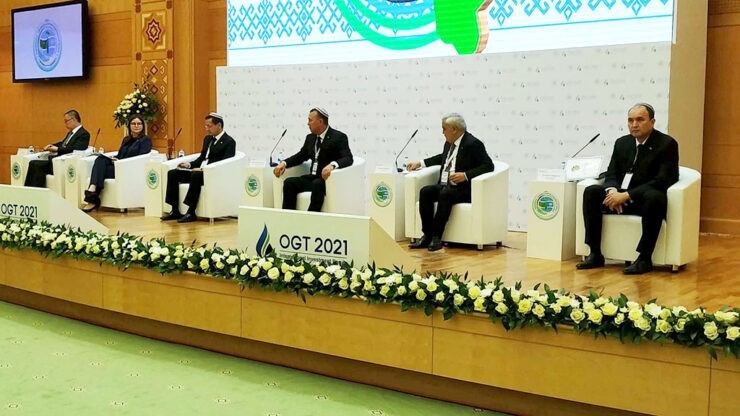 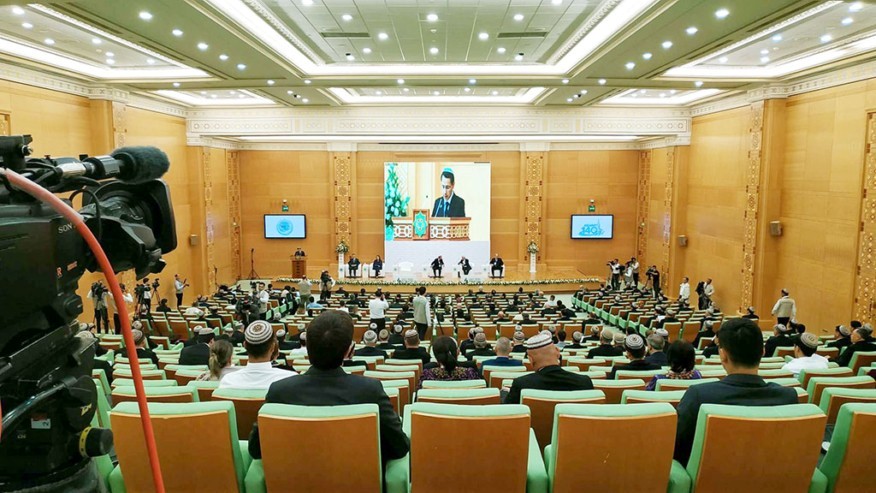 Being held in the mixed, physical and online format, the conference has been organized jointly by the Ministry of Finance and Economy of Turkmenistan, the State Concerns Turkmengaz and Turkmennebit, and the State Corporation Turkmengeology, with Turkmen Forum serving as the anchor organization.

About 500 delegates from more than 200 companies, entities, banking and finance institutions, and regional and global organizations are taking part.

Here are some important bits of information from the first day of the event:

The minister of finance and economy of Turkmenistan, Mukhammetgeldy Serdarov, said in his speech that the GDP growth of Turkmenistan is expected to reach 8% in 2024-2025.

Investments in such projects as the Turkmenistan-Afghanistan-Pakistan-India (TAPI) gas pipeline and the TAP energy line are of great importance for Turkmenistan. Their implementation will contribute to strengthening the socio-economic well-being of the region and achieving the Sustainable Development Goals (SDGs), Serdarov said.

The deputy chairman of the state concern Turkmengaz, Guvanch Agadjanov, said that the development of the Dostluk (Druzhba) field in the Caspian Sea by Turkmenistan and Azerbaijan would allow the export of natural gas to the west. This became possible thanks to the signing of a Memorandum of Understanding between the governments of Turkmenistan and Azerbaijan at the beginning of this year. This document regulated the main points regarding the exploration, development and development of the Dostluk field.

Rovnag Abdullayev, President of the State Oil Company of Azerbaijan (SOCAR), who is in Ashgabat for the forum, said that SOCAR is ready to provide Turkmenistan with the Southern Gas Corridor for the transportation of Turkmen energy resources to international markets.

“An excellent example of cooperation in the near future will be the joint development of the Dostluk field, a project that representatives of Azerbaijan and Turkmenistan are already successfully working on,” Abdullayev said.

China has imported about 300 bcm of gas from Turkmenistan

Chinese Ambassador to Turkmenistan Qian Naicheng stressed that cooperation between China and Turkmenistan in the field of natural gas is a clear manifestation of the mutually beneficial nature of bilateral relations. In this regard, he noted that China has imported about 300 billion cubic meters of Turkmen natural gas through the Turkmenistan-China gas pipeline since its commissioning in 2009.

Simultaneously but separately, information from the authorities in China that Chinese imports of Turkmen gas will increase in view of decrease of the import of gas from Australia

Edison Technologies intends to launch an investment project in Turkmenistan

Today at the international investment forum, which is being held in Ashgabat, Edison Kasapoglu, President of Edison Technologies, speaking online, said that he intends to implement an investment project to build a gas dehydration, purification and cooling unit on the Korpeje – Chaloyuk gas pipeline using innovative technology.

In particular, he noted that his company Edison Technologies together with the companies Silica Verfahrenstechnics GmbH, BASF SE and Honeywell will design and build this unit for the state concern Turkmennebit, investing its own funds.

As it was noted, negotiations on this project have already begun in October 2020 and the parties have come to a mutual opinion to implement the investment project. The fact is that there are production oil wells at the Korpeje field, where associated gas comes out in parallel with oil. With the help of this installation, this gas will undergo purification and drying and then will be transported for export in the form of commercial natural gas.

The projected unit will improve the quality of commercial gas and the country’s export potential in this area, as well as increase the reliability of gas supplies in the Turkmen-Iranian gas pipeline passing through the Chaloyuk GIS.

“In this project, we envisage a full range of interrelated works, including full engineering, manufacture and supply of equipment, construction, installation and commissioning works, personnel training,” said Edison Kasapoglu.

The project team includes leaders in their respective industries. For example, Silica Verfahrenstechnics GmbH is the European leader in the construction of such plants. Using the latest developments in technology, the company has built more than 20 such plants around the world, the largest of which are in Europe. The German concern BASF SE is the world leader in the production of the necessary catalysts for such plants. The products of this company are in great demand in the global oil and gas market. Honeywell is one of the leaders in the manufacture and installation of automation and software.

According to Edison, this project will be implemented with direct 100% investments. [Turkmen Portal]

Afghanistan is ready to build TAPI in 2021

Acting head of the Central Bank of Afghanistan, Ajmal Ahmadi, during his video speech at the International Oil and Gas Investment Forum in the capital of Turkmenistan, said that Afghanistan is ready to start building TAPI on its own territory as early as 2021.

Ahmadi stressed that Afghanistan has already done significant work to ensure the safety of the construction of the gas pipeline, which should help accelerate the implementation of the cross-border pipeline. [Turkmen Portal]

The financial expert of the Asian Development Bank for the West and Central Asian region R.Padet noted in the framework of his presentation that the TAPI gas pipeline will contribute to the improvement of the ecological situation in the region and the growth of the level of socio-economic development of the member states. [Turkmen Portal]

Excerpts from coverage by TDH:

Particular emphasis in the reports sounded was placed on the need to restore the world economy after the COVID-19 pandemic and the transition to environmentally friendly development, taking into account global warming, which has become a serious challenge to humanity.

Energy demand is projected to grow gradually along with the global economy and population. At the same time, the most demanded of hydrocarbon resources will be natural gas, since it is economically and energy efficient, cheap and environmentally friendly fuel.

The largest growth in gas demand will be provided by the electric power industry and the industrial sector – first of all, the petrochemical and gas processing industries, whose products serve as raw materials for the production of a wide range of household and industrial goods, mineral fertilizers, etc. Along with this, the consumption of natural gas in the housing and communal and transport sectors will increase.

At the same time, taking into account the concern of the international community with the problems associated with climate change, renewable energy sources, first of all, wind and solar energy, innovations in the field of hydrogen and energy-saving technologies, digitalization of the fuel and energy complex will receive further development.

Geographically, the highest growth rates in energy consumption are expected in China and other countries in the Asia-Pacific region. As know,, ranking first in Central Asia and fourth in the world in terms of natural gas reserves, our country is one of the largest producers of environmentally friendly fuel in Eurasia, a large volume of which is exported to China.

Among the long-standing partners is Petronas Charigali (Turkmenistan) (Malaysia), which carries out exploration and production of hydrocarbons in the Block – I contract area. It has already produced more than 2.5 million tons of oil and 9.5 million tons of condensate, as well as about 27 billion cubic meters of natural gas. The company’s investments at the beginning of April 2021 amount to about US $ 11 billion.

In turn, Dragon oil (Turkmenistan) Ltd, a subsidiary of Dragon oil (UAE), develops the Dzheitun and Dzhygalybek fields, which are part of the Cheleken contract territory. A large amount of work has also been carried out here to modernize and develop the offshore oil and gas infrastructure. In total, about 7.5 billion US dollars were allocated for these purposes.

In addition, there are Production Sharing Agreements for a number of offshore blocks with Buried Hill (Cyprus), ARETI (headquartered in Geneva, Switzerland). The Italian company “Eni” has been operating in the Caspian region for many years, its activity extends to the contract area “Nebitdag”. The main hydrocarbon reserves are concentrated in the Burun field. Fruitful cooperation has been established with Mitro International (British Virgin Islands), which, together with Turkmen partners, participates in the development of the East Cheleken field as part of the Khazar consortium.

New prospects for realizing the energy potential of the region were opened by the signing of a Memorandum of Understanding between the Government of Turkmenistan and the Government of the Republic of Azerbaijan on joint exploration, development and development of hydrocarbon resources of the Dostluk field in the Caspian Sea.

In accordance with the Program for the Development of the Oil and Gas Industry of Turkmenistan until 2030, it is planned to build the second stage of a plant for the production of synthetic gasoline from natural gas in the Akhal velayat, an isobutane production unit at a polymer plant in Kiyanly, new gas chemical complexes for the production of rubber, polystyrene, polyvinyl acetate, methanol and etc. Along with this, priority attention is paid to increasing the production capacities of the Turkmenbashi complex of oil refineries, where it is also planned to commission a number of new installations.

Session 4 — investment projects in monetization of hydrocarbons – a glance to the future /// nCa, 13 May 2021