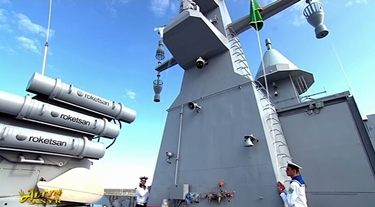 In the eastern part of the Caspian Sea, nearby the new Karshi naval base, Navy and Coast Guard of Turkmenistan held a parade this year. Missile boats, patrol ship and patrol boats, and capabilities of marine special forces were demonstrated. The flagship of the Turkmen Navy, the corvette Deniz Han, took part in the parade.

Gurbanguly Berdymukhamedov is the founder of the Turkmen Navy

During the era of Turkmenbashi, Saparmurat Niyazov, the first president of independent Turkmenistan, Ashgabat had no naval forces at all. There was only a handful of Coast Guards. This was the case for several years after Niyazov’s death. In 2008 there were 10 patrol boats of Russian and Ukrainian design 1400 and 1400M Grif, 14081 Saiga boat derived from the USSR Coast Guard fleet, one obsolete Point type boat, transferred from the US Coast Guard fleet, several Kalkan-M small boats built in Ukraine and the old well worn out former Soviet 1252 Korund base minesweeper. There was a marine battalion, but it had no landing craft. The main naval base, the port of Turkmenbashi (former Krasnovodsk), was under the operational control of the Border Guard Command.

The situation started to change when Gurbanguly Berdymukhamedov came to power in Turkmenistan. He led the country through many reforms that put it on a modern track. Among other things, Berdymukhamedov turned Ashkhabad toward the sea. It was clear to the new head of state that the country, located at the richest offshore oil and gas fields, simply must have strong navy.

In 2009, Gurbanguly Berdymukhamedov initiated a program to create a national naval force and to modernize the Coast Guard. As a matter of fact the Navy and the Voast Guard were to become a unified structure, consisting of a compact but effective fleet with fairly broad defensive and strike capabilities.

The same year two missile boats Gayratly («Bold») and Edermen («Valiant») of project 12418 «Lightning» with a total displacement of 580 tons and 40-knot maximum speed were ordered from Russia. They are armed with four quad-mounted anti-ship missile launchers «Uran-E» with a range of 130 km, 76-mm automatic universal artillery mount AK-176M and two six-barreled 30-mm AK-630M machine guns. Even nowadays these boats are second only to Project 21631 Buyan-M small missile ships of the Russian Caspian Flotilla in terms of their firepower in the area. When «Lightnings» joined the Turkmen Navy in 2011, Berdymukhamedov visited the ships. Later he went to sea on board the Gayratly missile boat for exercises.

Earlier, two patrol boats of project 12200 «Sobol» equipped with automatically controlled interceptors were built in the Russian Federation for the Coast Guard of Turkmenistan. They are capable of reaching speeds of up to 50 knots.

Then Turkmenistan shifted its focus from Russia to Turkey with regard to fleet construction. The rapid development of the Turkish shipbuilding and military industry attracted the attention of many countries, especially because export products were offered at quite reasonable prices. Ankara was willing not only to supply ships and boats, but also to create enterprises in the customer’s territory to assemble combat ships according to Turkish designs and out of Turkish components.

With the participation of the Turkish company Dearsan Shipyard, the shipbuilding and ship-repair plant of the State Border Guard of Turkmenistan in Ufra, near Turkmenbashi, was built and then deeply modernized. Ten large 400-ton, 57-meter NTPB (New Type Patrol Boat) missile-artillery boats were assembled there, based on Turkish Tuzla patrol ships with a maximum speed of 25 knots and a range of 1,000 miles. On the superstructure they are equipped with two dual-package Italian Otomat Mk 2 anti-ship missile launchers with a range of up to 180 km and 210 kg fragmentation and shaped charge warheads or the same number of compact Marte Mk 2/N Sea Killer anti-ship missiles with a 70-kg warhead and a range of 30 km. The boats are also armed with Italian twin 40 mm Oto Melara Twin Compact turret artillery mounts, two Turkish 25 mm Aselsan STOR remote-controlled automatic guns and two SIMBAD-RC SAMs with a range of up to 6.5 km and the Roketsan multi-barrel depth-charge projector. The boats are equipped with Thales Variant 2D radars.

The lead border patrol ship of the NTPB type was named Arkadag, that is, «Patron». Which is one of the official titles that Gurbanguly Berdymukhamedov holds.

NTPB type boats in the Coast Guard are usually not armed with missiles. But it can be installed in a short time if necessary.

The Ufra shipyard also assembled six FIB/FAC 33 small 33-meter missile boats, capable of reaching speeds of 35 knots, with the help of Turkish experts and out of Turkish components for the Coast Guard of Turkmenistan. They are armed with two or four Marte Mk 2/N anti-ship missile launchers and Aselsan STOP, 25 mm remotely-operated artillery system on the bow.

With the support of Dearsan Shipyard ten small 15 meter long patrol boats of AMV («Bars-12») type, landing boats and a hydrographic vessel, which can perform tasks of a reconnaissance ship, were built for the Coast Guard of Turkmenistan.

The corvette Deniz Han was then again assembled at the shipyard in Ufra using Turkish components.

A new naval base in Karshi, south of the entry to the Gulf of Kara-Bogaz-Gol and north of Turkmenbashi, was created for naval ships and commissioned in 2021. It was there where a spectacular parade was held, demonstrating Turkmenistan’s outstanding achievements in building its Navy and Goast Guard, bringing it from the fifth last place in the Caspian region to the first place. This event also paid tribute to Gurbanguly Berdymukhamedov, the main ideologist and builder of the fleet, who, having passed the presidency to his son Serdar Berdymukhamedov, became the chairman of the upper house of parliament.

Ashgabat intends to continue developing its fleet. And the country is very strong in the area. It suffices to say that the ships and boats of Turkmenistan today can deploy 32 Kh-35E anti-ship missiles, 48 Otomat Mk 2 and 12-24 Marte Mk 2/N anti-ship missiles (depending on the number of launchers installed on each boat). In other words, their total ammunition is 92-104 full-fledged anti-ship missiles, some of which are capable of engaging coastal targets. For comparison, the number of missile launchers of the Caspian Flotilla of the Russian Navy is 44 units, however Russian ships can solve not only tactical and operational tasks, but also strategic ones. ///Originally published by Caspian Institute for Strategic Studies, 14 Nov