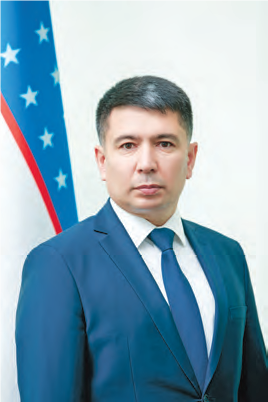 Akmaljon Kuchkarov, Ambassador Extraordinary and Plenipotentiary of the Republic of Uzbekistan to Turkmenistan

On 1 September, the Uzbek people celebrate the next anniversary of the greatest holiday – the National Independence Day of the Republic of Uzbekistan. Every citizen of Uzbekistan has the right to be immensely proud of this date, because in a short period by historical standards, we have traveled a journey equal in importance to centuries, and our country has established itself as a modern, independent and sovereign state developing at a steady and stable pace.

The factors of wise leaders who are able to look beyond the horizon, set ambitious goals and objectives, unite the people and lead them to new achievements play an important role in the development and formation of states and societies. Such a person in the modern history of Uzbekistan is the national leader Shavkat Miromonovich Mirziyoyev, who, thanks to his endless devotion to his people, deep awareness of his duty to the Fatherland, future generations and history, tireless work and dedication, was able to win the sympathy and universal love of the Uzbek people and rally their creative potential for the development and prosperity of our Motherland. The implementation of the principles put forward by President Sh.M.Mirziyoyev “Human interests are above all” and “Not the people should serve state bodies, but state bodies should serve the people” turned Uzbekistan into a country of limitless opportunities.

Thanks to the large-scale transformations carried out under the leadership of President Sh.M.Mirziyoyev in the socio-political and socio-economic spheres, Uzbekistan has become one of the most dynamically developing countries in the world over the past five years. In five years, Uzbekistan has risen from 141st to 69th place in the international ranking of the World Bank “Doing Business”. The introduction of a visa-free regime for citizens of 88 countries (in 2016, it was valid for 9 countries) made it possible to turn the Republic into one of the most developing tourist centers in the world. Uzbekistan’s achievements in liberalizing the economy and stimulating entrepreneurship have earned high praise in the international arena. Reputable rating agencies Moody’s, Fitch Ratings and Standard&Poor’s have assigned the Republic of Uzbekistan an international sovereign credit rating with the mark “Stable”.

In his speeches, the President of Uzbekistan notes that the results achieved are only a small part of what needs to be done to build a “New Uzbekistan”. In order to achieve the ambitious goals and objectives set, the President approved the Development Strategy of the “New Uzbekistan” on 28 January 2022. The key goal of the Strategy is defined as “building a people’s state by ensuring human interests and further development of a free civil society.”

The development strategy of the “New Uzbekistan” also provides for further deepening and expanding constructive cooperation with the countries of Central Asia and expanding the range of activities of our country in international organizations. Uzbekistan’s chairmanship in the Shanghai Cooperation Organization and the holding of the summit of this organization in Samarkand on 15-16 September 2022, as well as Uzbekistan’s chairmanship in the Organization of Turkic States and the hosting of the OTS summit in November 2022 in Samarkand are considered both as the recognition of the achievements of Uzbek diplomacy in the global arena and the increased role of Central Asia in international politics.

Turkmenistan has traditionally been one of the important partners in the implementation of strategic domestic and foreign policy priorities of Uzbekistan. It should be emphasized that Shavkat Mirziyoyev made his first foreign visit to Turkmenistan in March 2017 as President of Uzbekistan. As a result of the visit, a historic document was signed – an Agreement on strategic partnership. The trusting dialogue established between the leaders and their firm political will allowed opening a new page in the history of the development of Uzbek-Turkmen cooperation.

Inter-parliamentary cooperation is becoming one of the drivers of Uzbek-Turkmen cooperation. This was vividly confirmed by the participation of the Chairman of the Senate of the Oliy Majlis of the Republic of Uzbekistan T.K.Narbayeva in the Inter-Parliamentary Forum and Dialogue of Women “CA+Russia” on 12-13 May 2022 in Ashgabat. Uzbekistan expresses confidence that the accumulated positive experience of inter-parliamentary cooperation, as well as legislative support of foreign policy initiatives of our countries within the framework of bilateral and multilateral formats will contribute to further deepening of strategic partnership relations between Uzbekistan and Turkmenistan.

The most important event in the history of the development of relations at the present stage, undoubtedly, was the first foreign state visit of President of Turkmenistan Serdar Berdimuhamedov to the Republic of Uzbekistan on 14-15 July 2022, which demonstrated the continuity and inviolability of the relations of strategic partnership between the two states. On the eve of the visit, the first inter-regional forum of Uzbekistan and Turkmenistan was held in Bukhara on 13 July, following which a solid package of documents on the implementation of joint projects worth over US $ 450 million was signed.

The instruction of the Presidents of Uzbekistan and Turkmenistan on the need to develop and adopt a joint roadmap for the implementation of the agreements reached indicates an unprecedented level of mutual trust between our countries. Moreover, the agreements signed in the field of organizing joint ventures on the territory of Turkmenistan for the assembly of Uzbek cars and household appliances, the creation of border trade zones and the opening of Trading houses of Uzbekistan and Turkmenistan in Tashkent and Ashgabat show that the interaction of the two countries has risen to a new dimension – industrial cooperation, joint planning and development.

At the present stage, Uzbekistan and Turkmenistan are actively working to deepen inter-sectoral cooperation and expand direct contacts between representatives of the business circles of the two countries.

Uzbekistan and Turkmenistan are conducting complementary work on the development of transport connectivity in Central Asia, the realization of the transit potential of our countries and the restoration of their role as the most important links of the Great Silk Road. The delegation of Uzbekistan took an active part in the International Conference of Ministers of Transport of Landlocked Countries in Avaza on 15-16 August 2022. As a result of the event, agreements were reached on the speedy implementation of the Ashgabat Agreement on the creation of the Uzbekistan–Turkmenistan–Iran–Oman transit corridor, joined by Kazakhstan, Qatar and India, as well as on the development of a route from Central Asia to Europe using the capabilities of the Turkmenbashi International Seaport.

Today, it can be stated with all confidence that the centuries-old relations of friendship and mutual understanding between the Uzbek and Turkmen peoples at the present stage are enriched with special content and meaning. In building Uzbek-Turkmen relations, we, as the closest neighbors and fraternal peoples, are guided by the wisdom inherent in Uzbeks and Turkmens, which says that peace and prosperity in a neighbor’s house means peace and prosperity in your house. Our joint projects create the ground for further strengthening our political dialogue, deepening cultural and humanitarian ties, mutual support for our initiatives and the realization of our potentials. ///Neutral Turkmenistan, 1 September 2022