Home » OTS Summit to adopt the Samarkand Declaration, which will record agreed positions on key regional and international issues 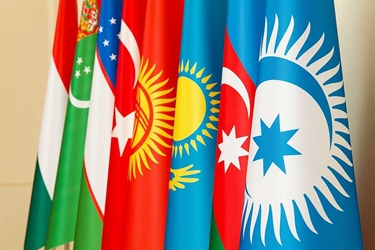 Today, Uzbekistan, promoting the irreversible process of large-scale internal transformations and presenting an integrating regional and international agenda, is ready to receive the leaders of the Turkic states to make coordinated decisions necessary for the transition to a new era of common development and prosperity of the Turkic civilization, said Daniyar Kurbanov, the acting director of the Information and Analytical Center for International Relations (IACIR), in an interview with the news agency Dunyo:

“The upcoming first summit of the Organization of Turkic States (OTS) on 10-11 November will be held in the ancient and eternally young city of Samarkand under the chairmanship of President Shavkat Mirziyoyev. Its main theme is “A new era of Turkic civilization: together on the path to common development and prosperity”.

It is no coincidence that the summit is being held in Samarkand – a beautiful pearl of ancient Turan and one of the recognized historical centers of the Turkic world. As the capital of powerful states and great rulers, this great city, located at the crossroads of the main transport routes of the Great Silk Road, has for centuries made an invaluable contribution to the mutual enrichment of various cultures, playing the role of a communication hub and a place of contact of civilizations. Therefore, it was in this city that President Shavkat Mirziyoyev put forward the Samarkand Solidarity Initiative in the name of Common Security and Prosperity at the SCO summit in September, designed to launch an inter-civilizational dialogue, join the efforts of all countries to solve the most acute problems of our time.

The OTS Summit will mark a new stage in the development of the association of Turkic states, officially established under the Nakhichevan Agreement under the name of the Cooperation Council of Turkic-speaking States (CCTS or Turkic Council) in 2009. Uzbekistan, the second most populous Turkic–speaking state, joined this organization in 2019, which gave a noticeable impetus to the development of cooperation between the Turkic countries.

In 2019-2021, at four summits of the Turkic Council, the President of Uzbekistan put forward about 35 specific initiatives to develop multifaceted economic, cultural and humanitarian cooperation, which significantly enriched the organization’s agenda.

The intensification of practical cooperation pushed the institutional development of the organization, and in November 2021, at the Istanbul summit, a decision was made to transform the Turkic Council into an Organization of Turkic States. This decision was evidence of the desire of Member States and observers to deepen cooperation in priority areas and, in this regard, to form a more developed institutional framework and mechanisms for promoting practical cooperation. Thus, the leaders of the member states (Azerbaijan, Kazakhstan, Kyrgyzstan, Türkiye and Uzbekistan) and the observers of the OTS (Turkmenistan and Hungary) will gather at the summit in Samarkand for the first time in a qualitatively new format of a full-fledged organization of the Turkic world.

The theme of the Samarkand summit “A new era of Turkic civilization: together on the path to common development and prosperity” seems to fully express the desire of the Turkic states for further rapprochement on the basis of centuries-old spiritual and cultural community, as well as progressive ideals and mutually beneficial cooperation.

The current global transformations naturally encourages interaction among “family” nations, the search for workable solutions to the development issues they face, the creation of successful strategies for fostering interregional cooperation, and the strengthening of humanitarian ties in order to realize the enormous civilizational potential of the Turkic states at a new stage.

The OTS countries came to the Samarkand summit with a packed agenda and a solid package of legal documents and other decisions that clearly show the potential for mutually beneficial cooperation.

During the summit, the Samarkand Declaration of the OTS will be adopted, which will record the positions agreed by the Member States on key regional and international issues and the development of multilateral cooperation in political, economic, cultural and other spheres.

It is also planned to adopt a decision on the Strategy of the Organization of Turkic States for 2022-2026, which will integrate all areas and programs of multilateral cooperation for the coming years.

Special attention will be paid to practical cooperation issues on the agenda. Among them are such priority topics for Uzbekistan and other regional countries as the creation of favorable conditions for mutual trade and investment cooperation; simplification of administrative procedures for the passage of goods along the Trans-Caspian International Transport Corridor; development of cooperation in the fields of tourism, energy, agriculture and food industry.

In this regard, a number of agreements and documents are expected to be adopted, including the Transport Connectivity Program and the Agreement on International Multimodal Cargo Transportation. These decisions are necessary to radically improve the situation in the mutual trade of the OTS countries. Today, its share in the total trade turnover of the participating states is only 3% and needs to be multiplied.

In addition, the leaders of the OTS countries will discuss the creation of mechanisms for regional cooperation in the fields of science and education, technology and innovation, as well as strengthening cooperation in the cultural and humanitarian sphere, including on issues of history, culture, traditions and values.

The development of practical cooperation between the Turkic states is ultimately designed to create conditions for effective modernization and improvement of the socio-economic situation of our countries. The agenda of the summit is fully in tune with the UN Sustainable Development Goals aimed at ensuring equitable economic growth and improving the quality of life of peoples.

Since Uzbekistan will assume the chairmanship after the summit, the implementation of the above-mentioned decisions and other agreements of the leaders of the countries, along with new initiatives of Tashkent on cooperation, will have a decisive impact on the development of multilateral cooperation in 2022-2023.

In general, there is every reason to believe that the Samarkand Summit will significantly advance multilateral cooperation between the OTS and contribute to the creation of a safer, more just, and more prosperous world, thanks to the efforts of all the parties who actively participated in the elaboration of the decisions taken. ///nCa, 11 November 2022 (in cooperation with Embassy of Uzbekistan in Turkmenistan)