Here is a summary of the article:

Saxaul forests grow in the deserts of Kazakhstan, Uzbekistan, Turkmenistan, as well as in China, Iran and Afghanistan.

Kazakhstan ranks first in the world in terms of the area ofsaxaulforests: more than 6 million ha are occupied by saxaul of 12.6 million hectares of land covered with forest. In Turkmenistan, for example, it is 1.5-2 million, and in Uzbekistan – only 600 thousand hectares. The average life expectancy of saxaultree is 50-60 years.

The value of saxaul for nature and people

In winter, the saxaul holds the snow and it helps feed the underground water. Young and very nutritious shoots serve as good forage for camels, sheep, goats. Saxaulis also called a water scout, as it always appears where groundwater is close to the surface.

However, another function of the saxaul is much more important – the retention of sands dunes in desert and semi-desert areas. For example, one saxaul tree holds four tons of sand, thus helping agriculture.

The sand attack on human settlements is a reality in which hundreds of families live, says UNDP biodiversity project manager TalgatKerteshev. In the village of Batpakty, located 160 km far from Almaty, a whole street was left under the sands.

On the outskirts of some settlements of Baksan district of Almaty there is no belt of saxaul. The villagers felled them for heating the houses in winter. Some people graze cattle in the thickets.

A moratorium on the saxaul felling

For the first time, the government of Kazakhstan introduced a moratorium on cutting down saxaul in 2004. It was in force for 14 years. During this period, the saxaul spred out in a large area. In 1996, according to the forest scientist Zhailau Toktasynov, the area of saxaul forests was just over 4 million hectares. By 2006, thanks to the ban imposed two years earlier, it had grown to 6.1 million hectares.

In early 2019, the authorities decided to extend the moratorium for another 5 years, until the end of 2023.

In 2017, the Forest code was amended to prohibit trade in saxaul.

According to Vice-Minister of ecology, geology and natural resources of Kazakhstan Yerlan Nysanbayev, the Committee of forestry and wildlife of the Ministry of agriculture of Kazakhstan annually sets limits for saxaul wood  amounting four cubic meters per household.

Fines have also been introduced for illegal logging of saxaul. The courts can appoint the arrest for up to 30 days. In addition, the parliament mulls over amendments providing for tougher sanctions. 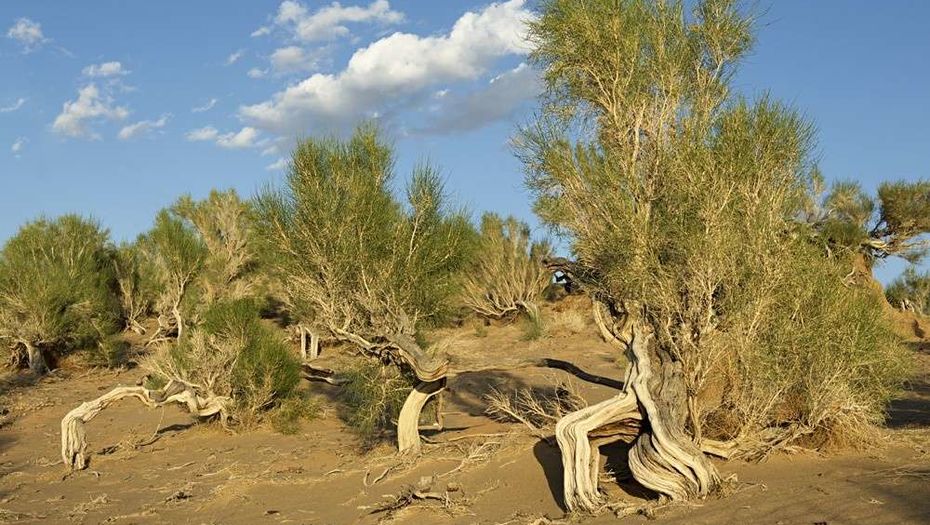 After the collapse of the USSR in Turkmenistan, saxaulwas cut down in a non-stop regime, said Sultan Veissov, research adviser, of the National Institute of deserts, flora and fauna of the Ministry of agriculture and environmental protection of Turkmenistan. Prohibitive measures are ineffective, he said. The Turkmen authorities chose the other way.

Turkmenistan solved this problem by 100% gasification of all settlements. The cities are supplied with natural gas and the villages – with liquefied bottled gas. So, there is a no need for saxaul for baking flatbread in tandoor, if there is a gas.

“We also have a ban, but the saxaul will not be cut down because there is gas. It is much cheaper than going to cut down a tree and pay large fines. If you get caught several times, it will be a criminal punishment”, said Veissov.

The effectiveness of this approach has proved in Kazakhstan.

“In Kyzylorda and Mangystau regions, where there is gas, there are no facts of illegal logging of saxaul. In Zhambyl and Almaty regions there is no gas, so they are heated with saxaul. Since the beginning of this year in Almaty region, 5 facts of illegal logging have been revealed at the volume of 5 cubic meters. In Zhambyl region 11 facts- the volume of 15 cubic meters”, said the coordinator of the UN Convention to combat desertification in Kazakhstan KairatUstemirov.

A few decades ago there was one desert reserve in Turkmenistan – the Repetek reserve. Now there are 9 such reserves in the country. All of them are home for white and black saxaul.

“We sent the staff of akimats (provincial governorates), ecologists, forestry workers of Karakiyan district of Mangystau region, Aral district of Kyzylorda region and Balkhash district of Almaty region to Turkmenistan, which is the only country in Central Asia Desert Institute. They demonstrated us two methods of suspending mobile sands. Mechanical protection – creation of 2×2 sized squares of reeds have been created”, said Talgat Kerteshev, UNDP biodiversity project manager.

In these squares thesaxaul seedlings were planted, from which a small bush grew the next year.

“The experience of Turkmenistan was applied in the village of Batpakty on the territory of 2 hectares, in Aralkum-3 hectares. Survival rate is 50-60%,” Kerteshev added.

UNDP has also initiated the planting of saxaul and other trees on the territories, where the Aral was once. The dried seabed accounts for 6 million hectares, this leads to the formation of salt marshes.

The black saxaul is best suited for planting on saline soil. It feels comfortable where other plants can not survive.

In 2016 UNDP together with Coca-Cola company opened a nursery in Aral forestry (Kyzylorda region). It started with one hectare, then the coverage has increased to 4 ha. In previous years, a fairly simple scheme was used: seeds were scattered from aircraft, then cattle were driven through the sowing areas to trample the seeds into the soil. 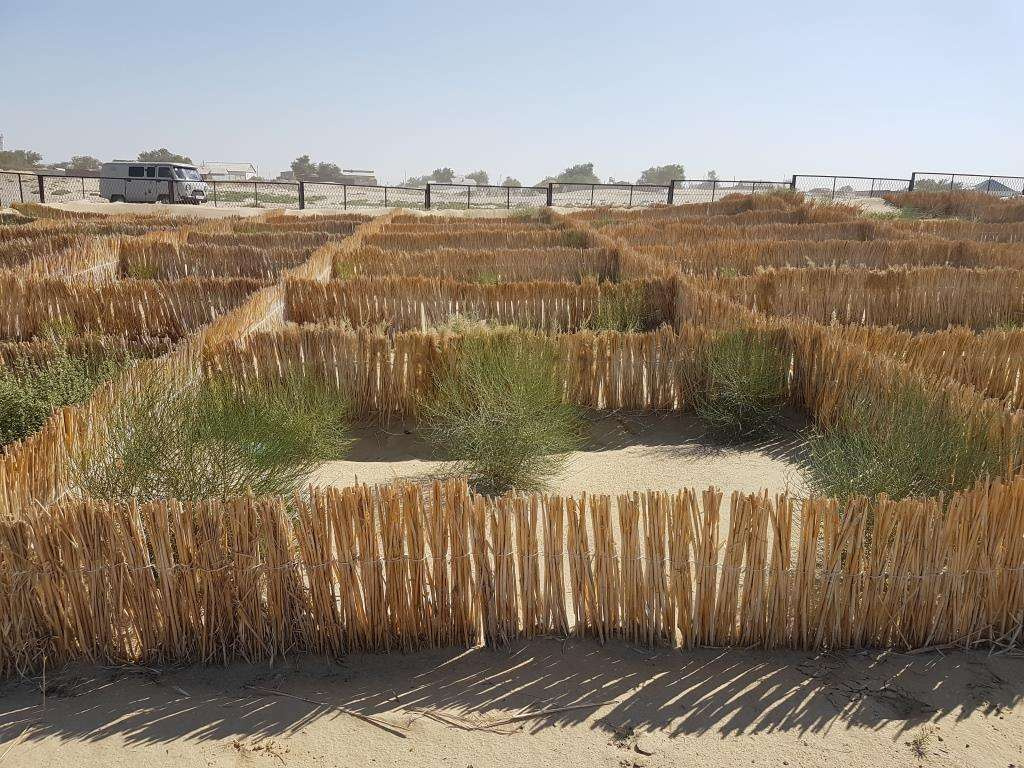 Every year the nursery provides planting on the territory of 2.5 thousand hectares.

By 2018, 10 thousand hectares of the former Aral seabed were forested with saxaul. Survival rate of young seedlings was 40-45%.

In addition, saxaulis grown in Kazalinsk nursery of Kyzylorda region, which contributes 3 million pieces of planting stock per year.

“In the framework of the World Bank project from 2008 to 2014 56 thousand hectareswere planted. With the forest service of Korea in 2019, we planted 10 thousand hectares, in 2020 we will plant 3 thousand,” said Talgat Kerteshev.

Under the new program “Conservation of key forest ecosystems” (2018-2023), UNDP allocates over US $ 8 million to Kazakhstan for the conservation of mountain forests, snow leopards, floodplain forests and saxaul. Now the contest “Green restaurant” is held, which should show which restaurants and their owners do not use saxaul in cooking. The program also provides optional classes on the theme of saxaul in schools in East Kazakhstan, Almaty, Zhambyl and Turkestan regions.

It is planned to create a nursery, improve the work on prevention and elimination of wildfires.

“We will create a seed bank. The bank will collect the most qualitative samples in terms of growth, diameter. The laboratory will be created on the basis of the Institute of botany under the Committee of science in Almaty and the Kazakh forest seed breeding center in Almaty and Shchuchinsk”, said UNDP representative TalgatKerteshev.

In December, UNDP plans to send the specialists to South Korea to visit the laboratories of the seed bank and then apply the practice in Kazakhstan. /// nCa, 11 November 2019

The full article “Kazakhstan tries to save saxaul forests from mass deforestation. Why is this important?”(in Russian) can be found here: