You are here: Home / Articles And Reports / Turkmenistan-Uzbekistan: Strategic Partnership in Action

Ashgabat, 22 May 2017 (nCa) — It took less than 75 days for the Turkmenistan-Uzbekistan strategic partnership to start delivering hugely important results.

President Shavkat Mirziyoyev of Uzbekistan was in Turkmenistan, 19-20 May 2017, for a working visit. For proper context, it should be viewed as an extension of his official visit, which took place on 6-7 March 2017. 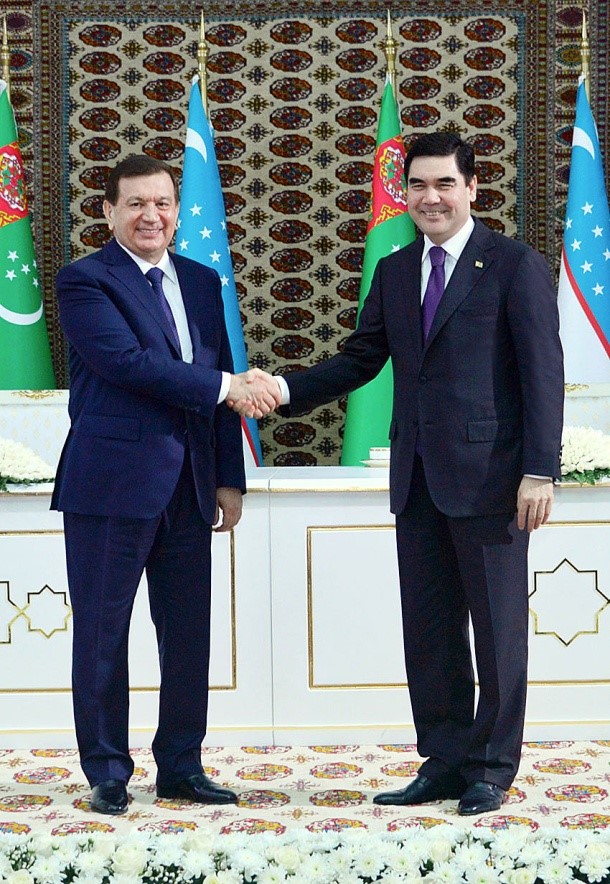 During his earlier visit, which was also his first visit to any foreign country after taking the oath of office, the sides signed several documents, the most important being the treaty for strategic partnership.

During the visit of 19-20 May in Avaza, the national tourist zone of Turkmenistan, the presidents of both the countries had extensive consultations, leading to significant announcements in the framework of strategic partnership:

The following documents were signed on 20 Mary 2017 in Avaza:

In order to comprehend the full significance of these documents, let’s look at the bilateral instruments signed in March 2017:

A whole packet of breakthroughs

Uzbekistan has given a nod to the prospects of its participation in TAPI.

It was not an impulsive announcement. There has certainly been considerable brainstorming, individually and collectively, before this tentative commitment.

Let us also keep in mind that Kazakhstan has also shown interest in joining TAPI.

If both Uzbekistan and Kazakhstan join TAPI, there would be hardly the need of any additional infrastructure to pipe their gas into TAPI. The Central-Asia-Centre (CAC), which is a network of three trunk lines for transporting the natural gas from Central Asia to Russia and onward to Europe, is mostly idle except for small volumes of Uzbekistan and Kazakstan.

The part of CAC that connects with the gas pipeline network of Uzbekistan and Kazakhstan can be used for bringing the gas to Galkynysh, from where it can be streamed into TAPI. The metering stations already exist at the borders to measure the volumes from each contributor.

Let us recall here that a couple of months ago Turkmenistan declared that production of Polymers from natural gas would be its priority in the development plans. —– This is quite logical.

We are nearly halfway through 2017, which is the first year when the cost of production of electricity from renewable sources such as solar and wind has come down to the level of power generation from hydrocarbon resources.

Moreover, production of polymers (such as polypropylene, propylene, polyurethane, polyethylene, etc) still leaves behind significant volume of gas which went into the production cycle as feedstock. It means that in addition to the readily marketable polymers, the natural gas is still available for use as fuel.

The price of natural gas in the world markets has remained rather low for the past several years but the prices of polymers have been increasing steadily. It is therefore advisable to turn the natural gas into polymers for better profit.

TAPI is a recognized vehicle for carrying the Turkmen natural gas to Pakistan and India. Very little work would be required to add the Uzbek and Kazakh volumes to this pipeline. Pakistan and India can consume their contracted volumes and the surplus can be piped to the Gawadar Port of Pakistan, which is designed to be the second largest deep sea port in the world.

The Central Asian producers of gas, either on their own or in the shape of any desirable joint venture format, can produce polymers at the free zone of Gawadar, for export to the vast markets easily reachable through sea routes.

The willingness of Uzbekistan and Kazakhstan to join TAPI makes perfect sense.

One of the documents signed on 20 May pertains to the transit of electricity from Turkmenistan through the Uzbek territory, presumably to Kazakhstan, Kyrgyzstan and Tajikistan. This document would also come handy in the facilitation of TUTAP (Turkmenistan-Uzbekistan-Tajikistan-Afghanistan-Pakistan electricity grid).

The transport and transit sector featured prominently during the talks. With the opening of the road and rail bridges in March this year, the volume of traffic between Turkmenistan and Uzbekistan has increased by 2.5 times already. With further development of the transport infrastructure in Turkmenistan, including the modernization of the Turkmenbashy Port, it would be easy for Uzbekistan to patch into the regional networks for wider movement of cargo.

These are notable breakthroughs. For them to turn into reality by the fastest means, the sides would need to remain engaged at the highest level.

The presidents of Turkmenistan and Uzbekistan addressed jointly a press conference at the end of their talks in Avaza on 20 May 2017.

Here is the translation of the transcript of the press conference:

Dear representatives of media, I would like to express my great gratitude and once again welcome the distinguished President of Republic of Uzbekistan and members of his delegation for accepting our invitation to visit Turkmenistan on a working visit. We meet on the coast of the Caspian Sea in the national tourist zone of Avaza. And today’s talks once again confirmed our commitment to the further development of the Turkmen-Uzbek dialogue in various fields and in many areas.

During today’s meeting and negotiations, we discussed the situation on all aspects of our bilateral relations, issues related to international regional policy and trade, economic, cultural and humanitarian issues.

As concerned international politics, the visions of Turkmenistan and Uzbekistan on the international platform mostly coincide or both countries have common opinions. This is especially true in such matters as ensuring peaceful and stable development in the world, as well as development in Central Asia.

We reaffirmed our principled position of Turkmenistan and Uzbekistan, that all conflicts should be resolved peacefully, as well as in political-diplomatic format.

Today, during the talks, we also discussed the situation in Afghanistan. This is our neighbor country. Therefore, we would like to see our neighbor as a peaceful and stable country, so that Afghanistan in its economic issues would have a good integration. In this issue, Uzbekistan and Turkmenistan have fulfilled great wrok. The supply of electricity is aid. There is a railway.

Turkmenistan has initiated the Turkmenistan-Afghanistan-Pakistan-India gas pipeline project. And we would like to invite our Uzbek colleagues to participate in realization of this project.

We have considered the issues of ecology. Turkmenistan is the chairman of the International Fund for Saving the Aral Sea and with experts of the Fund we have developed a priority concept on our joint activities. The activity of all the member states of this Fund is of great importance.

We have considered the issue of trade and economic spheres. It is pleasant that we have signed a document on the expansion of our commodity nomenclature for 2018-2020. The main activity depend on the intergovernmental commission. Uzbekistan and Turkmenistan have a large reserve potential.

We also considered issues related to energy and transport. Uzbekistan and Turkmenistan possess vast hydrocarbon resources. We stand for the policy of diversification of these energy flows. We have a clear example in this matter. For example, our joint implementation of the project is the construction of a gas pipeline to China or I mentioned the construction of the TAPI gas pipeline. We would like to see our Uzbek colleagues in accomplishing our common joint projects.

The development of transit-transport corridors is also important for us. On 7 March we, together with respected Shavkat Miramanovich, opened two bridges at once, that connect our countries – automobile and railway bridges.

In such a short time, I can proudly say that the flow of goods through these bridges has now increased two and half times. These bridges connect not only our fraternal states, but also provide great assistance to other countries in the region.

Talking of our cultural and humanitarian issues, undoubtedly our centuries-old ties of friendship, national peculiarities, and traditions have been pursued in the format of exhibitions, festivals, days of culture, and the issues of education and science play major role.

In the national tourist zone of Avaza we have all the recreational opportunities for the benefit of our peoples. Avaza today turns into a resort and tourist industry, a cultural, business, sports center. All the material and technical basis that we can use for the benefit of our peoples have been created. For example, in the field of sports, there is an opportunity to get experience from our athletes in the preparation for the 5th Asian Games. In Avaza area, there are good spa resorts, having no analogues in the world where not only a number of diseases are cured, but also they are useful for prevention of certain diseases – for example, Mollakara, and a number of other water sources [with medicinal properties].

I’m glad that the children from Uzbekistan came to have rest on the coast of the Caspian Sea. [President of Turkmenistan invites all Uzbek brothers to Avaza].

Our today’s meeting, negotiations, once again show that the results of the visit, and the cooperation of our two countries are both long-term and toward a strategic direction for the benefit of our peoples.

I would like to thank the President of Republic of Uzbekistan for his personal contribution to strengthening the ties of friendship between our peoples and to wish you great success in government activities and wish prosperity and happiness to our brotherly people of Uzbekistan.

Really, I believe that our today’s talks, especially in the Avaza zone, in privately and extended format, were held in an atmosphere of frankness, trust and mutual understanding. On the main issues, our positions coincide. We have determined on many issues and agreed our perspective and strategy of actions in the spirit of good-neighborliness, mutual understanding.

After the talks, held on 7 March, we have made progress on very many issues and those two bridges have formed the economic base that Uzbekistan had been waiting for years. These are the bridges of friendship, which embody economic benefit – cargo traffic increased by two and half times.

We are very grateful to President Gurbanguly Malikgulyyevich for the offer to participate in the construction of the largest TAPI gas pipeline. We express our gratitude. I think we will definitely participate.

Today we have signed documents in the oil and gas industry. For the first time we will participate in [development] the shelf of the Caspian Sea together with our “Uzbekneftegaz”. This is a great responsibility.

We also signed a solid document on the electric power industry. This also has a perspective.

There was much talk about the situation in Afghanistan. We will continue to support Afghanistan in the stabilization of its economy.

Regarding the International Fund on saving Aral Sea, we agreed to promote our vision of these issues both in the international arena and everywhere.

In the cultural and humanitarian sphere, I congratulate friendly Turkmen people on the Day of Constitution and poetry of Magtymguly. The street named after Magtymguly and monument of this great philosopher were opened in the center of Tashkent just recently. The people of Uzbekistan also celebrated this day.

We signed a document stating that Ashgabat and Tashkent are sister cities. In the center of Tashkent near the street of Magtymguly, a park “Ashgabat” will be built. This is very symbolic. The park will embody the history and culture of the Turkmen people. And the citizens of Uzbekistan, visiting this park, will once again be reminded convincingly of our age-old friendship and today we continue this friendship with joint actions.

We are in the unique zone of Avaza. Today, when the world economic crisis is going on, there is no country that could build such a zone. Turkmenistan has set an example of how to focus. There is such benefits as exemption from taxes for 35 years. There are many opportunities for us to engage, too. I am grateful, because Uzbekistan is an iodine deficit region. [President Mirziyoyev thanked for the invitation of Uzbek children to visit Avaza and creation of all conditions for them.]

The visit was very fruitful and a solid package of documents was signed on all issues. [He wished successes to the Turkmen people invited President of Turkmenistan to visit Uzbekistan.] /// nCa