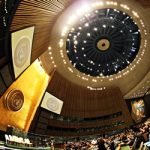 The Permanent Representative of Turkmenistan to UN Aksoltan Atayeva spoke at the general debates of 77th UN General Assembly session. Food and energy security, transport and climate changes were highlighted in the speech of the Turkmen Ambassador. Describing dialogue as the only acceptable way to resolve conflicts and differences, she called for the restoration of […]