You are here: Home / Articles And Reports / Third session of joint committee on cooperation between Turkmenistan and the UAE

On the 21st of October, 2020, the third session of the Joint Committee on Cooperation between Turkmenistan and the United Arab Emirates was held through videoconferencing. The Turkmen delegation was headed by the Minister of Foreign Affairs of Turkmenistan Rashid Meredov, while the Emirates side was led by the Minister of Foreign Affairs and International Cooperation Sheikh Abdullah Bin Zayed Al Nahyan. 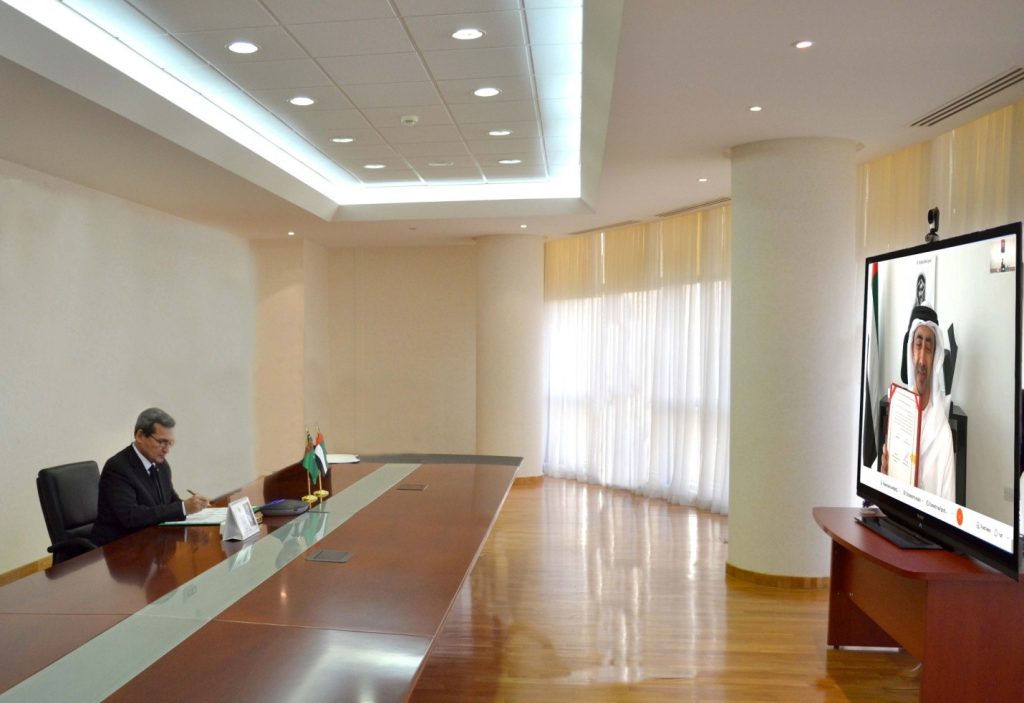 After exchanging warm greetings and highlighting the high dynamics of development of bilateral relations, the Ministers started to discuss a number of key issues in political-diplomatic, trade-economic and cultural-humanitarian spheres.  The high level of trustworthy dialogue between the leadership of two countries was underlined.  It was also specifically noted that the high-level contacts play the primary role in further promotion of interstate ties.

The Ministers reiterated the importance of cooperation between the external policy agencies of the two states. Emphasizing that at present year the 25th anniversary since the establishment of diplomatic relations between Turkmenistan and the United Arab Emirates has been reached, the parties expressed satisfaction with the results of the work accomplished during the past period. Special accent was made on collaboration within international organizations, including the UN, OIC, Non-Aligned Movement. Gratitude expressed to the Emirates side for the support of Turkmenistan’s Neutrality and the initiatives of the state in the area of energy and ecological security, sustainable transport, sport and others.  As is known, Turkmenistan is calling for the advancement of peaceful dialogue, emphasizes the role of preventive diplomacy and adheres to the “open door” policy.  In this regard, the Turkmen side noted the significance of the UN General Assembly resolution declaring 2021 as the Year of International Peace and Trust initiated by the President of Turkmenistan. It was especially noted that Turkmenistan will be glad to welcome representatives from the UAE on the occasion of the relevant events planned for the upcoming year.

Speaking about the threats and challenges of the present, the parties noted the significance of strengthening international cooperation in combatting the global pandemic. The Ministers exchanged views on further steps for overcoming the social and economic impacts of the pandemic on world scale.

The trade and economic relations between the two countries were thoroughly discussed. The interest of both states in expanding the spectrum of cooperation between the governmental and private entities, as well as the enhancement of the investment climate was expressed. An exchange of views took place on the application and development of transport potential of Turkmenistan and the UAE.  It concerned the issue of setting in motion the maritime, railway and air transport, application of port infrastructure for the promotion of bilateral and multilateral trade and economic relations.  In this regard, the importance of the World “EXPO-2020” was stressed, in which Turkmenistan intends to take active part.  It was noted that Turkmenistan is open for cooperation on the implementation of the energy and infrastructural projects, particularly the construction of Turkmenistan-Afghanistan-Pakistan-India gas pipeline.

The parties underlined the importance of “green economy” and exchanged views on the use of stable energy, advancement of innovative technologies and expert knowledge in the field of renewable energy.  In this regard, the interest of Turkmenistan in expanding collaboration in the framework of the International Renewable Energy Agency (IRENA) was expressed.

The Ministers discussed the issues of cultural and humanitarian scope and spoke for the strengthening of practical cooperation in the area of science, education, culture and sport.

In the end of the session, the parties expressed satisfaction with the successful work of the current meeting and spoke for the upkeep of active work of the third session of the Joint Committee on Cooperation between Turkmenistan and the United Arab Emirates for the coming future.

Upon the outcomes of the talks, Protocol of the Third Session of the Joint Committee on Cooperation between Turkmenistan and the United Arab Emirates. /// MFA Turkmenistan, 21 Oct