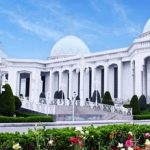 Today, in Ashgabat, a meeting of the State Assembly (Dovlet Maslahaty) was held under the chairmanship of President Serdar Berdimuhamedov. The successes accomplished were summarized in the agenda of the national forum, which was held in honor of Turkmenistan’s 31st anniversary of independence. Priorities for the nation’s future comprehensive development were also covered. As President […]