DPM, minister of foreign affairs Rashid Meredov is on a visit to the capital of Uzbekistan, Tashkent to participate in the International Conference “Central and South Asia: Regional Connectivity. Challenges and Opportunities”, which takes place on 15-16 July 2021. On the sidelines of the forum, the foreign minister held several bilateral and multilateral meetings.

Turkmenistan to host summit of Central Asian countries in August

On the eve of the conference, an informal meeting of the foreign ministers of the Central Asian countries was held in Tashkent on 14 July. The meeting was organized on the initiative of the Turkmen side. 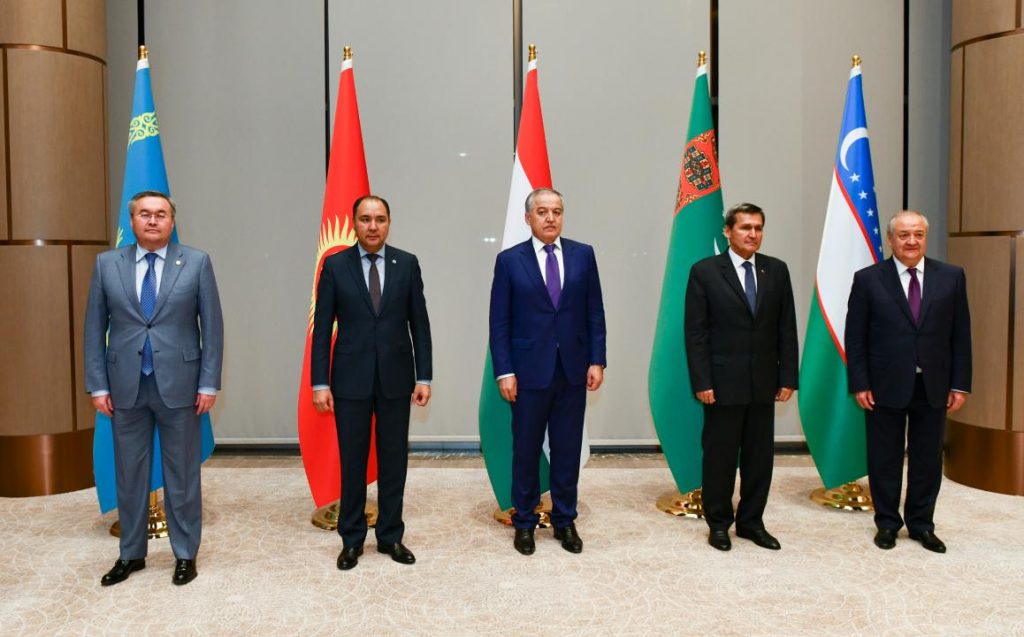 The ministers discussed preparations for the Consultative Meeting of the heads of Central Asian states to be held in Turkmenistan on 6 August 2021. In particular, the parties exchanged views on the agenda of the upcoming meeting, and reviewed a set of documents to be adopted during the summit. Organizational and protocol issues were discussed in detail.

The pressing issues of cooperation between the regional countries in such areas as trade, transport, energy and combating the pandemic were touched upon.

Meeting with the Kazakhstan foreign minister

On 15 July 2021, Meredov met with his Kazakhstani counterpart Mukhtar Tleuberdi.

The parties discussed the development of cooperation in the fuel and energy sector, in the field of industry, transport, communications, culture and humanitarian sector.

Meredov and Tleuberdi stressed the full mutual understanding of the two countries on many international issues, and also noted the importance of mutual support for the initiatives and candidacies within the framework of international organizations. The parties expressed their readiness to continue collaboration to counteract present challenges, both at the bilateral and multilateral formats.

The participation of a high-ranking delegation of Kazakhstan at the upcoming Consultative Meeting of the Heads of Central Asian States was also considered.

Meeting with the Minister of Foreign Affairs of Tajikistan

On 15 July 2021, Turkmen foreign minister had a meeting with the minister of foreign affairs of Tajikistan Sirojiddin Mukhriddin.

The parties discussed cooperation in such areas as trade and economy, transport, agriculture, water use, in the cultural and humanitarian sphere. 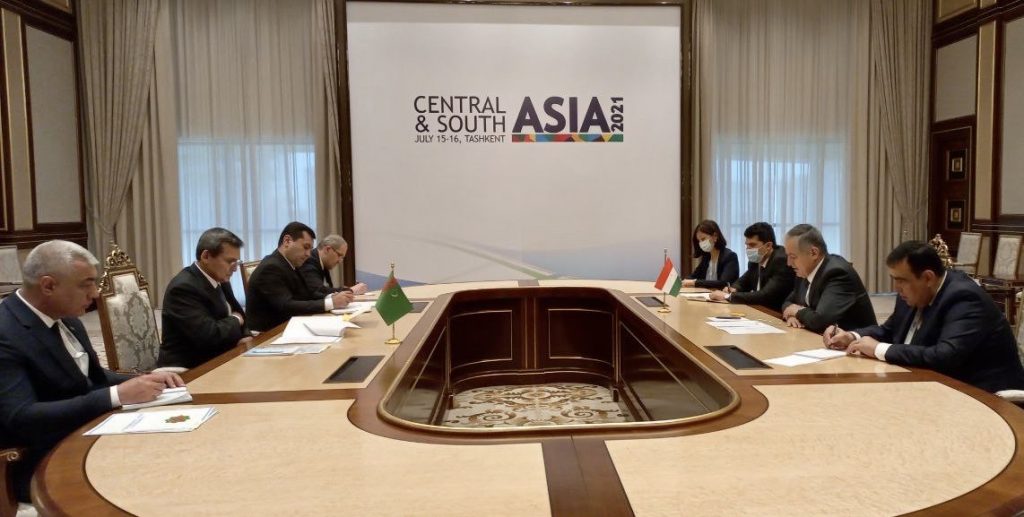 The issues of regional security cooperation and countering present threats were also touched upon. In particular, they stressed importance of consolidating efforts aimed at maintaining political stability in neighboring Afghanistan.

Meeting with the EU Special Representative for Central Asia

Noting the timeliness and effectiveness of the face-to-face meeting, the parties discussed topical issues of cooperation between Turkmenistan and the European Union.  The level of trade and economic relations and interaction on the humanitarian line was considered. The parties analyzed current and prospective joint projects, including in the field of healthcare, ecology, transport, and education. 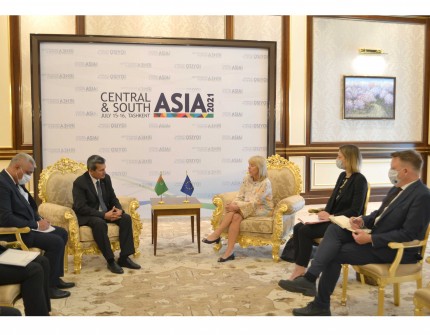 The key aspects of the regional and international agenda were mentioned. The diplomats spoke in favor of strengthening foreign policy coordination to maintain regional stability and security. In this context, the effectiveness of the existing mechanism of cooperation between the EU and the countries of Central Asia was confirmed.

On July 15, 2021, negotiations under “C5+1” format between the foreign ministers of the Central Asian countries and the US delegation were held in Tashkent.

The US delegation was headed by the Assistant to the President for Homeland Security Ms. Elizabeth Sherwood-Randall. US Special Representative for Afghanistan Reconciliation Ambassador Zalmay Khalilzad attended the talks.

The main item on the agenda was the discussion of the situation in Afghanistan amid the withdrawal of coalition troops. “The participants of the meeting expressed commitment to the establishment of stable and smooth conditions facilitating the peace process in Afghanistan,” the foreign ministry of Turkmenistan said in a release.

The parties also paid attention to the key areas of cooperation between the Central Asian countries and the USA in the political, diplomatic, trade, economic, cultural and humanitarian fields.

The meeting adopted a Joint Statement.

Here is the related story from the ANI/Sputnik:

US to build support base for Afghan Peace, says Biden adviser

Washington [US] July 15 (ANI/Sputnik): The United States will continue to solicit strong support for the Afghan peace process both regionally and internationally, said Homeland Security Adviser Elizabeth Sherwood-Randall on Thursday.

The White House adviser made the statement during the C5+1 meeting in the Uzbek capital of Tashkent. The format includes five Central Asian countries (Kazakhstan, Kyrgyzstan, Tajikistan, Turkmenistan, and Uzbekistan) plus the United States.

“We will continue to support negotiations to achieve a political solution that brings Afghans the peace they deserve and to build a strong regional and international support base for Afghanistan’s future,” Sherwood-Randall said.

She noted that C5+1 members can do more jointly rather than alone or on a bilateral basis to address issues of common interest.

“We will continue to provide security assistance to the Afghan National Defense Forces, as well as development and humanitarian aid. We will continue to take aggressive action against terrorist groups that threaten the US and that undermine the security of our allies and partners, including your countries,” Sherwood-Randall said.

The ongoing withdrawal of foreign troops from Afghanistan resulted in a flare-up of tensions between the government forces and the Taliban (banned in Russia as a terrorist organization). The radical movement stepped up the territorial advances and is believed to have captured large rural areas in the country’s north. ///ANI/Sputnik

On 15 July, Mereodv attended the opening ceremony of the International Institute of Central Asia.

The heads of the foreign ministries of the Central Asian countries, representatives of the UN, CIS, SCO, the Cooperation Council of the Turkic-speaking States and the Conference on Interaction and Confidence-Building Measures in Asia joined the event. 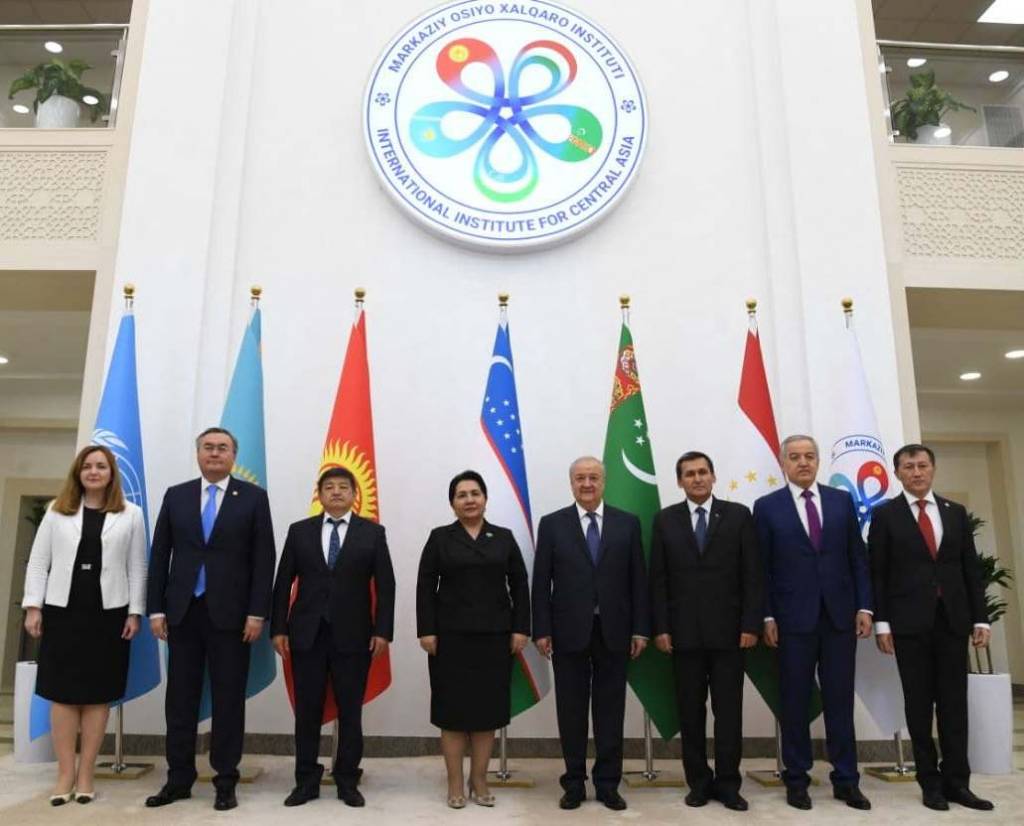 In his welcoming remarks, the foreign minister of Uzbekistan Abdulaziz Kamilov noted that the creation of this Institute indicates the “growing importance of regional political and economic processes that have been particularly pronounced in our region in recent years”.

He expressed confidence that the new institution would serve as a platform for expert discussions of the prospects for regional cooperation, the development of proposals for multilateral projects in various fields. ///Report compiled by nCa, 15 July 2021