The “Golden Reed Academy” is a group of Afghan writers and literary critics who distinguishes every year, on the occasion of the International Book Day literary works published in Afghanistan’s national languages. The academy members are some of the most famous writers, poets and critics of Afghanistan. Books recently published (less than 2 years) in an Afghan language are selected by the academy members and the award consisting of a very small amount of money (5000 Afghanis, approximately $70) and a certificate are presented during a ceremony with the participation of high ranking government officials and celebrities of Arts and Literature.

The 2019 awards were attributed to six books, three essays in Pashto, two poetry collections in Dari (Persian) and one poetry collection in Uzbek languages. There were two female writer among the nominees:

Afghan intellectuals also expressed their appreciation to Azar Salim, a famous poet of Tajikistan, for his contribution to the common culture of the two countries. 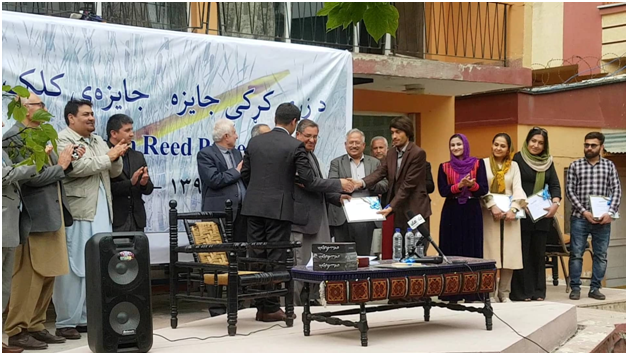 Award winners on the right side of the picture. From right to left :Dastgir Farhood, Gita Saeed, Nargis Hassanzey and Helal Farshidward.