You are here: Home / Articles And Reports / This is ill-conceived Cold War – HMS Defender incident proved it 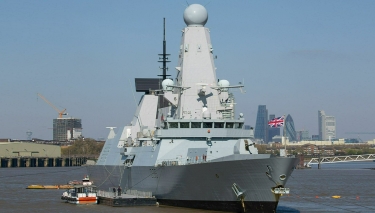 On 23 June 2021, the British Royal Navy vessel HMS Defender, arguably the best equipped warship in the world, particularly in the capacity of electronic warfare, sailed in the Black Sea on its way from the Ukrainian port Odessa to the Georgian port Batumi.

The ship deliberately entered the territorial limits of Crimea, which is under the control of Russia since 2014. The move was billed by the British side as an expression of freedom of navigation and a reminder that it does not recognize Crimea as a Russian terrain.

The Russian side reacted swiftly to warn the intruding vessel. The ship remained in the territorial limits of Crimea for 38 minutes only instead of the planned duration of about an hour.

According to a report by Peter Dickinson, published by the Atlantic Council on 25 June 2021: “The presence of a British warship in what Moscow regards as Russian territorial waters sparked a predictably volatile response. The Kremlin deployed naval vessels and warplanes in an attempt to force HMS Defender to change course, while claiming to have fired warning shots and dropped bombs close to the British ship. However, UK officials rubbished these claims. British Foreign Secretary Dominic Raab described Moscow’s version of the incident as “predictably inaccurate,” and confirmed “no shots were fired at HMS Defender.”

Here is the complete report by the Atlantic Council, a source obviously sympathetic to the British side:

The firing of warning shots or ‘shots across the bows’ is a move that is not taken lightly – it demands only ‘fight or flight’ response; there is no third option. If the intruding vessel acknowledges it, the custom demands that it must either move immediately out of the territorial waters or prepare to engage in action.

Were the shots really fired, as the Russian side claims, or were not fired, as the British side asserts? — A part of the truth was found in a dustbin behind a bus stop in Kent.

BBC reported on 27 June 2021 that some Classified Ministry of Defence documents containing details about HMS Defender and the British military had been found at a bus stop in Kent.

The classified reports found in the dustbin behind a Kent bus stop also proved that the sailing of HMS Defender near the coastline of Crimea was a planned act of provocation, and not an innocent passage as billed by the officials.

The BBC report says, “In the event, Russia chose to react aggressively, with radio warnings, coastguard vessels closing to within 100 metres and repeated buzzing by warplanes.”

The question whether the warning shots were fired by the Russians was dealt with in detail by a report published by the Guardian on 24 June 2021. It confirms the Russian version.

Here is the relevant part from the Guardian story:

During the passage through the Crimean waters, HMS Defender was shadowed by two Russian coastguard ships, one of which got as close as about 100 metres, while an estimated 20 aircraft buzzed overhead, in some cases at heights as low as 150 metres, according to British estimates, in a deliberate attempt to harass the warship on its journey.

Exactly 10 minutes later, the statement continued, “a Russian coastguard vessel warned that Russian units would shortly commence a live-fire gunnery exercise”. Artillery was seen behind or astern the navy ship at 10.08am, but it was “out of range” and “posed no danger”.

BBC and Daily Mail journalists on the warship both heard cannon fire in the distance – but UK defence sources on Thursday said the heavy guns were three miles away, using weapons understood to have a range of 2.5 miles. Because they were not fired at the vessel they could not be considered to be warning shots.

“At no point were warning shots fired at HMS Defender,” Wallace said, “nor bombs dropped in her path as has been asserted by the Russian authorities.” HMS Defender then departed the territorial waters at 10.26am UK time.

A few minutes later, Russia’s defence ministry told the Interfax news agency that warning shots had been fired at the British warship and bombs dropped in its path, with the first reports in English emerging at 11.05am. The UK denial emerged an hour later, at 12.09pm, as the incident had already become headline news.

The fact is thus established that the Russians fired warning shots. Trying to explain it away by the British side on the basis of some technicalities is not quite convincing.

A diagram published by BBC shows the course followed by HMS Defender near and inside the territorial limits of Crimea.

It can be seen in the diagram that the Royal Navy ship lurched from its course as it neared the territorial limits of Crimea. This is possibly the time when the warning shots were fired by the Russian side. 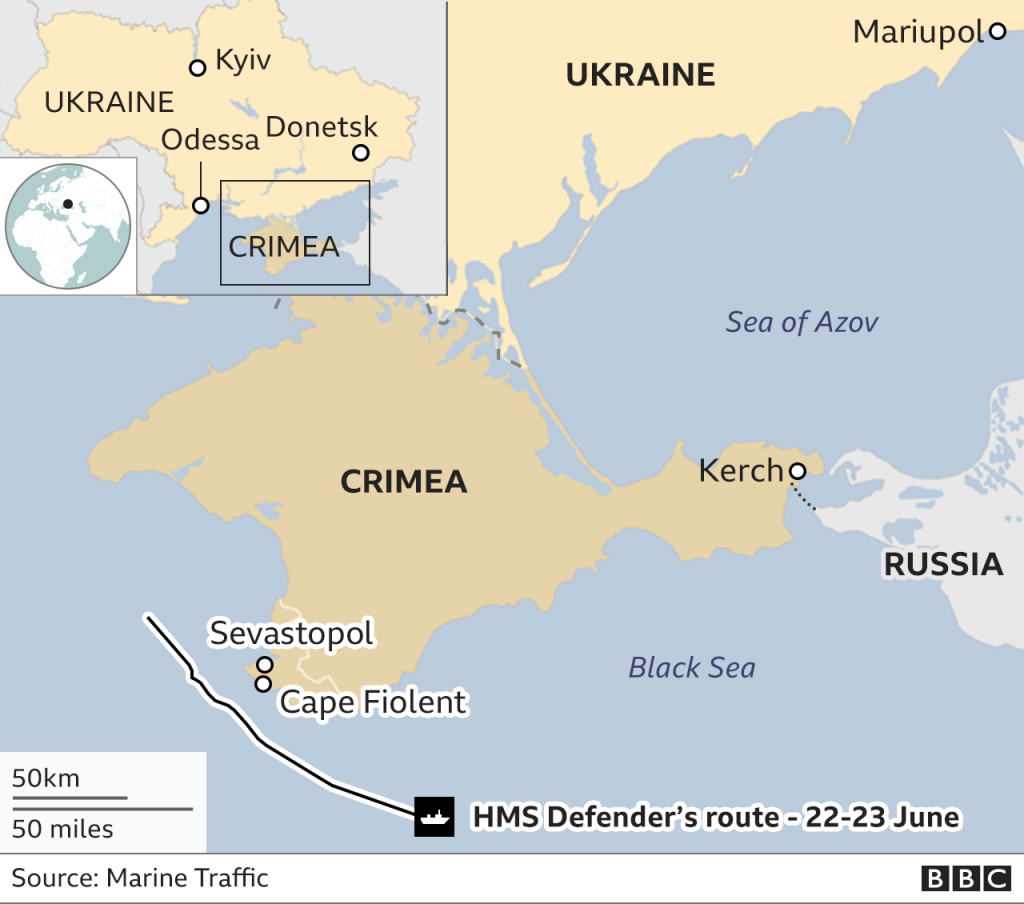 There is also an important point: HMS Defender planned to stay inside the territorial limits of Crimea for about an hour but the actual passage lasted for no more than 38 minutes.

The violation by HMS Defender of the Crimean territorial limits is a compact incident – spanning only 38 minutes – but it has highlighted some crucial flaws in this ill-conceived Cold War.

First, and foremost, is the inadequacy in estimating and assessing the capacity of the adversary. — When you go out there for posturing, the element of surprise should be on your side. You war-game all the possible ranges of responses from the opposite side. Your top priority is not to get surprised.

The RN ship was not surprised that the Russians responded; they were surprised at the speed and scale of the Russian response.

The Royal Navy is considered the mother of most navies in the world and rightly so. It is composed of thoroughly professional officers and sailors.

They should have been ready for at least one component of this surprise i.e. the instant response by the Russian side.

We don’t actually know the reasons for this lapse but there is one possible explanation: abundance of technology and over-reliance on it.

Before the days of satellite and a plethora of electronics, there was a simple way to try to identify an approaching ship even when it was beyond the horizon or the visibility was poor: the propeller noise of the ship.

The fact is that every ship has a different propeller noise which becomes kind of its ‘identification mark.’ Even the ships of the same class or type will have slightly different patterns of propeller noise, particularly when they have undergone a major overhaul or repair/refit.

Nevertheless, it is not just any sailor who can attempt to identify a ship from its propeller noise. It needs a SONAR operator with years of experience, and with hundreds of propeller sounds in his memory, to make a guess.

The modern day equivalent is to maintain a library of ‘propeller signatures’ and run a fast comparison of the incoming propeller noise with thousands of those stored in the database. It takes just a few seconds and the machine presents a few possible matches from which the human operator has to pick the one he think is as close to the incoming propeller noise as possible. Therefore, despite all technology, it is the human judgment that plays the decisive role.

Why is this important in the HMS Defender incident?

For a navy to record the propeller signature of the ship of another navy, it is necessary for that ship to pass in the vicinity of the recording device for several minutes so that the clearest track can be recorded.

The HMS Defender escorted a group of Russian naval ships a couple of years ago through the British waters. While HMS Defender, with its state-of-the-art electronics, was recording the identifying features of the Russian ships, the Russian ships were doing their own recording. It is more than certain that the clear sound track of the propeller noise of HMS Defender was available in the Russian database on the day of the incident.

Had the command at HMS Defender and the higher command that planned this provocation kept in mind this small detail, they would not have been surprised with the speed of the Russian response. — As they say, the genius is in detail.

What is the take-away lesson from this? — Having a capability is something but the ability to use that capability correctly and to the fullest is something entirely different.

Come to think of it, it is the same kind of gap between the capability and the ability to use it to the fullest that led to a series of surprises in Afghanistan in the final days of the American departure. There was no dearth of the human and electronic intelligence but there was serious lack of the ability to synthesize and analyze the millions of bits of information to reach the correct conclusions.

Second, and equally important, is the lack of clarity.

What was the purpose of trespassing the Crimean waters?

Freedom of navigation? Innocent passage? Assertion that the British side considers the Russian occupation of Crimea illegal?

Regardless of the explanations given in the aftermath of the incident, the only purpose was to provoke the Russian side and see its response. — A noble enterprise on its own except that there was the inability to foresee the entire range of Russian retorts.

Going to a Cold War without comprehending the full array of consequences is hardly an admirable idea.

Thirdly, the HMD Defender incident shows that there are no firmly committed partners in this ill-conceived Cold War.

The incident of 23 June has proved to be an isolated act, and is already fading from the memory. This is not how a Cold War is conducted. For a Cold War to remain in the front row of attention, it must come up with a non-stop chain of newsworthy incidents. No one had duplicated the HMD Defender incident by violating the territorial waters of Russia or China since then.

The parent question here is: Who are the partners in the western camp?

We are aware of the vague concept of the ‘Indo-Pacific’ policy of USA, we have heard of the quad consisting of USA, Japan, Australia and India, we know a bit about Joe Biden’s worries that China would eat his lunch, we have registered the noises about containing China and Russia, but does it all add up to something tangible?

Apparently the tournament has been announced without forming the team.

And, if we understand correctly, the USA is not currently in a jolly good mood to lead a new campaign that might flare into a real war spanning two or three or even four continents.

Fourthly, what is in this ill-conceived Cold War for anyone wanting to join the western camp? What are the incentives?

Let’s reduce this question to a very small scale. —What did Great Britain get from this HMS Defender incident?

No one considered it an act of bravery; no one was really impressed. It did not add a feather to the prestige of Great Britain. Instead, it widened the gulf of distrust between the Great Britain and Russia. By proxy, it also cautioned many other countries to be wary of Great Britain. We can see the losses but we cannot see any gains.

What can the west offer to compensate for all of these losses?