You are here: Home / Articles And Reports / Visit of Berdymuhamedov to strengthen Turkmenistan-Italy partnership

President Berdymuhamedov will pay an official visit to Italy on 6-7 November 2019.  This visit is expected to enhance the partnership between the two countries.

In the backdrop of the forthcoming visit of President Berdymuhamedov to Italy, we asked Ambassador Diego Ungaro of Italy some questions: 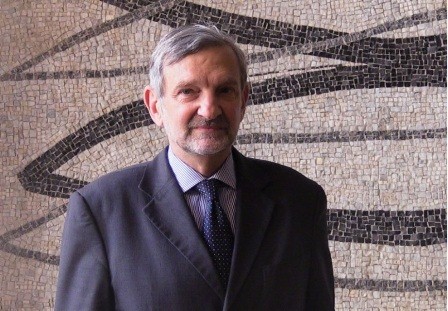 nCa: What is the current volume of bilateral trade turnover and what has been the trend during the past five years?

DU: Although it is not so known to the large public, Italian companies are often among the main strategic partner in many technology and industrial development projects of Turkmenistan, including in particular the enlargement of its industrial base, be it the port of Turkmenbashi, the airport of Turkmenabat, the glass factory of Ahal velayat or many smaller factories around the country.

This does not appear in trade statistics because it is mainly subcontracted through other countries. In any case bilateral trade value peaked to 605 Mil. euros in 2016 and may reach 200 Mil euros by the end of the current year.

nCa: What does Turkmenistan mainly import from Italy and what does it export?

DU: In my opinion Italy and Turkmenstan are really the optimal and most symbiotic partners: we import mainly energy and export substantially industrial technology.

nCa: What are the objectives of the business forum in Milan and what could be the mechanisms to achieve those objectives?

DU: This is a very historic moment as for the first time more than sixty private entrepreneurs, which are the bulk of the most promising future development of the Turkmen economy, will be in Milan at the second Business Forum of 2019 and will let their requests be known in one of the more vibrant market place of Central Europe. If only Turkmenistan could continue on this process of presenting itself on a permanent base in this tune, the pace of the opening of the economy would accelerate consistently, at the immediate benefit of the whole economy and, I hope, of its functioning.

nCa: What is the agenda of the visit of President Berdymuhamedov?

DU: President Berdymuhammedov is regularly visiting Italy, which he appreciates very much under different aspects, in particular for the reliability of the technological support he can receive for the development of the country. He was already in Rome in 2009, in Milan and Rome in 2015 and now is visiting again Rome, while in Milan one day before it takes place the last edition of the Business Forum. A new one is already scheduled for 2020.

nCa: What kind of documents are expected to be signed during the visit

DU: The bilateral cooperation in industrial, commercial and academic fields will produce a series of MoUs, letter of intents and contracts.

At the institutional level we do expect agreements on air services, health, environment, anti-terrorism as well as education and culture, renewal of the already existing cooperation with the Academy of Science to be signed during the visit or as a consequence of it.

nCa: In your view, what are the best ways to strengthen and broaden the partnership between Italy and Turkmenistan?

DU: Turkmenistan would help very much the opening of its economy by making permanent its presence in Milan, for instance through the promotion of a small private Chamber of Commerce Italy/Turkmenistan, able to assist and orient the identification and definition of further projects of industrial cooperation between small and medium enterprises SMEs of the two countries.

nCa: Any other points you may like to highlight

DU: There is no doubt that the new approach undertaken by Turkmenistan toward investment in education and more attention to Human capital and academic cooperation is where one can see the real future of the Country.

A new edition of the Italia-Turkmenistan business directory has been issued to coincide with the joint business forum in Milan on 6 November 2019.

Here are some quotes from Roberto Landi, the Director ITA (Italian Trade Agency) Istanbul, in the first part of the directory:

“The organization of three Business Forums between Italy and Turkmenistan within 2 years is an important step forward to strengthen economic and trade relations between our two countries. On the occasion of the second Italian – Turkmen Business Forum, which took place in Ashgabat in November 2018, there was a signiﬁcant participation: 30 Italian companies with total amount of 180 participants counting representatives of State institutions and 90 private enterprises from Turkmenistan. In addition to this, there is an established tradition to organize informal business forums the most recent of which was held in May at Ambassador’s residence with 30 participants.

“The program of the Bilateral Business Forum in Milan sees the participation of a large number of the most important Italian companies operating in Turkmenistan in strategic sectors as oil&gas, chemical industry, textile and leather, agro-industry, infrastructures and construction.

“Since 2016, the Italian Trade Agency (ITA) has been operating in Turkmenistan through an Assistance Desk based in Ashgabat and in close contact with the Italian Embassy. ITA Desk has the main task of assisting Italian and Turkmen companies and facilitating business cooperation between our two countries. It is important to outline the signiﬁcant increase in bilateral trade averaging 96 mln EUR in the ﬁrst half of 2019 (70.4 IMP and 25.5 EXP) compared to 32.1 mln EUR in 2018 (13.2 IMP and 18.9 EXP). Meanwhile it is noticeable that business interest of Turkmen companies is growing in 2019 and among the promotional initiatives organized by ITA I wish to mention the participation of Turkmen delegates to specialized trade fairs in Italy and abroad such as CIBUS, VITRUM and La moda Italiana @Almaty.

“Last but not least, I wish to thank the Ambassador of Italy to Ashgabat Diego Ungaro for the active role he is playing to strengthen the development of economic relations between our two countries, the Ministry of Foreign Affairs and International Cooperation in Rome and the Embassy of Turkmenistan in Republic of Italy.

“The Italian Trade Agency is a public organization entrusted by the Italian Government to support, trough promotional activities, trade relations, cooperation and investments between Italy and foreign countries. ITA operates abroad through a network of 78 ofﬁces in 66 countries.”

In the 28 years following the country’s independence, economic cooperation between Italy and Turkmenistan has been increasingly developed and oriented on the basis of a complementary model, based on a high interchange between industrial and technological components (the most signiﬁcant component of the Italian export) and energy (oil and reﬁned products imported, often indirectly, from Italy).

Although, as mentioned several times, direct trade exchange statistics do not allow to fully account for the intensity reached by this positive trend in bilateral cooperation (it is worth remembering that Italian technology is present in many if not most of the Turkmen industrial projects, from an important component of the port of Ashgabat to a whole segment of the glass factory at the gates of the capital Ashgabat, passing through some air and water treatment components of the major petrochemical projects carried out by Japanese and South Korean ﬁrms and the technological components of the Turkmenabad airport) and that, on the other hand, many types of Italian consumer products are widely available in the Turkmen trade (from agri-food to jewelry, clothing and footwear, from furniture to industrial vehicles), many of them are not recorded in the direct customs forms between Italy and Turkmenistan because they pass through third country as suppliers such as, in particular, Turkey and Russia and, therefore, do not appear in the ISTAT trade statistics or even in those of the Turkmen National Statistical Committee.

To the over 120 large and small Italian companies active, present or with interests in Turkmenistan of which the Embassy’s Economic and Business Ofﬁce is aware, one must add the many contacts established by the Agency ICE / ITA for foreign trade and the suppliers of non-ﬁnished chemical products, rubber and plastic, machinery and electrical equipment, iron work, etc.

In the ﬁrst half of 2019 ISTAT recorded a modest recovery in the interchange value (96 mil Euros) and, even more, the Turkmen  Statistical committee (750 mil USD), mainly due to the energy component of oil and reﬁned products exported to Italy.

By the end of 2019 the trade between Italy and Turkmenistan may reach the total value of about 200 mil Euros, while at its peak in 2016 it was at 605 mil Euros. 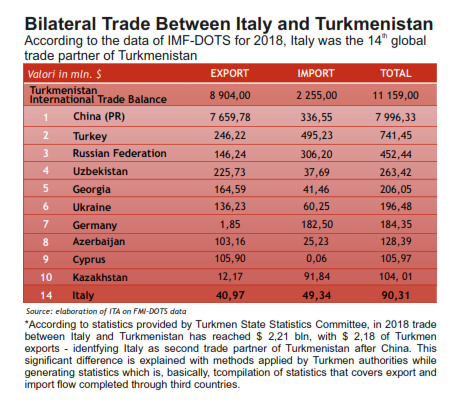 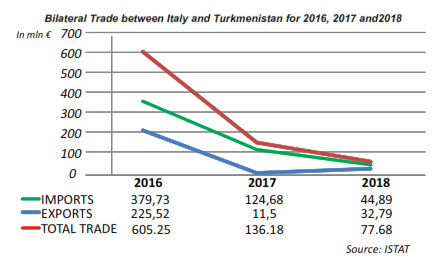 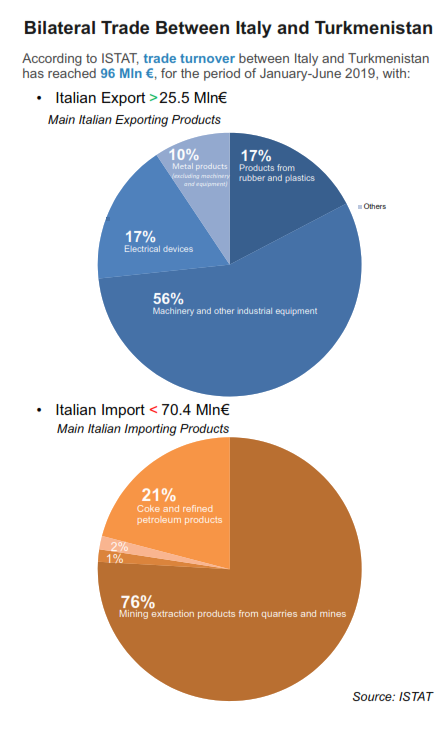