You are here: Home / Articles And Reports / Special prayer, ritual meal offered on 40th day of demise of father of President Berdimuhamedov

Special prayer and ritual meal – sadaka – were offered on 27 May 2021 in Ashgabat, marking the 40th day of the sad demise of Myalikguly Berdimuhamedov, the father of President Berdimuhamedov.

The service was held at Hezreti Omar mosque in Mir-7 area of the capital. 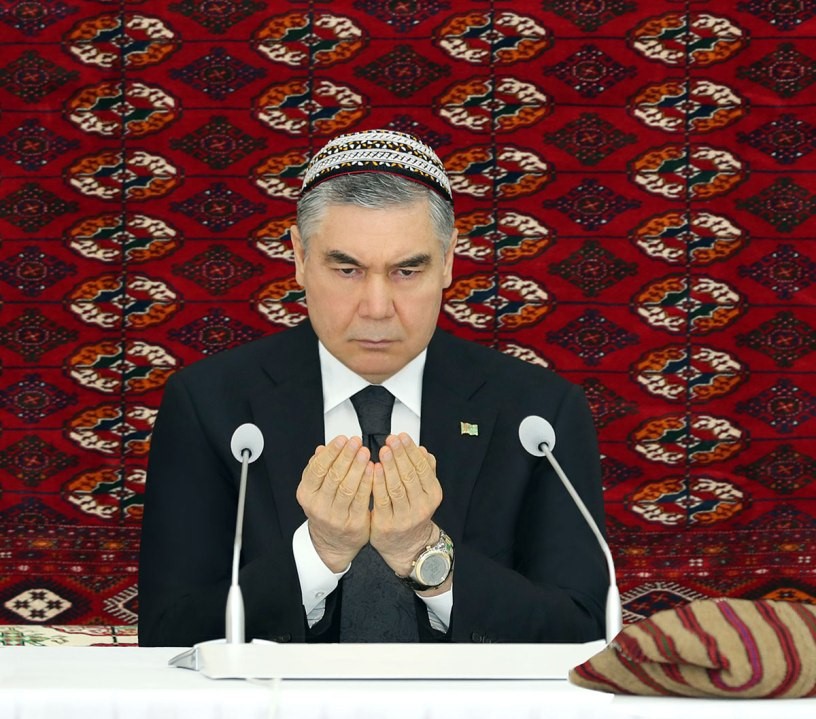 The president shared some fond memories of his father with the participants.

Here is the relevant portion from the TDH coverage:

The head of the Turkmen state addressed all those present with the words “May the Most High accept the prayers read!” and shared memories of his father.

– The life path of my father has become a school of life for me. He could find a way out of any difficult situation, the head of state emphasized.

He was a very cheerful person. When my grandfather Berdymukhamed Agha went to the front, my father was only eleven years old. Even in those difficult years, with his poems, my father gave people hope for victory, better days. Recalling the poem “Köp ekeliň dänäni” (“Let us sow grain in large quantities!), the head of state noted that it was published in 1944 in the regional newspaper “Ýagty ýol” of the former Kirovsky district.

In continuation, President Gurbanguly Berdimuhamedov said that every family has its own traditions. Their family tradition is to get together and celebrate their parents’ birthdays. In this regard, the Turkmen leader recalled the moment of preparation for the celebration of the 80th anniversary of Myalikguly-aga, when the sisters asked for advice: “What is the best present for my father for his birthday?”

As the head of state noted, his father was an energetic and cheerful person who was inspired by poetry and art. Therefore, the Turkmen leader said, I suggested that one of us read a poem and the others perform music and a song. The idea was supported, and we began to prepare.

Time is fleeting. The birthday has come; congratulations on the 80th anniversary have begun.

As the President of Turkmenistan said, he has a younger sister named after his grandmother – Durdynabat, and therefore everyone calls her Enegul.

When it was her turn to congratulate her father, she excitedly said: “Dad, I’m sorry, first of all, I did not have time to write a poem, and then, no matter how hard I tried, I failed to express my feelings artistically.”

The father smiled and replied: “Try to express all the wishes in your heart in your own words. Then we will try to put them together in poetic form. “Everyone listened with great attention, and her father immediately expressed her thoughts in verse. We all really liked this poem.”

The head of state said that the memories of his father will forever live in his heart.