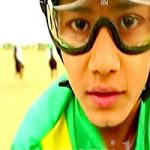 Elvira Kadyrova The Turkmen feature film “At-Myrat” will be shown in Seoul, the capital of South Korea, during the Central Asian Cinema week starting on 10 September. The film “At-Myrat” directed by K.Annanov and V. Ishanguliyev debuted in Turkmenistan in March 2017.  The film tells about the personal development of a teenager Merdan and his […]