You are here: Home / Archives for Rumi 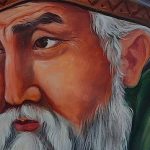 On December 7 and December 17 to commemorate Jalāl ad-Dīn Muhammad Rūmī on his 747th death anniversary Seb-i Arus Ceremonies were held in Konya, one of the major cities of Turkey. Every year since 1937, Jalāl ad-Dīn Muhammad Rūmī is being commemorated on his death anniversary at Seb-i Arus (Night of Reunion with the Divine) […]