You are here: Home / Archives for Foreign and domestic policy of Turkmenistan 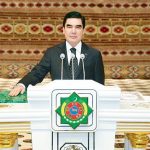 nCa Report Ashgabat, 20 February 2017 (nCa) — President Berdymuhamedov was sworn in for his third term in office on 17 February 2017 (Friday). This term, under the new Constitution of Turkmenistan, is for seven years – 2017 to 2023. In his speech at the inauguration ceremony, in his remarks to the armed forces contingents […]