You are here: Home / Archives for Ambassador Hassan Abdullah Al-Adhab 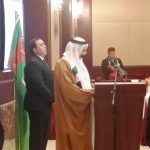 Ashgabat, 3 December 2016 (nCa) — The embassy of the United Arab Emirates in Ashgabat hosted a reception to mark the 45th anniversary of the formation of UAE. Ambassador Hassan Abdullah Al Adhab said in his speech that the UAE ranks seventh in the world in terms of per capita GDP and the citizens enjoy […]