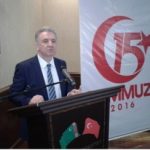 15 July is the Democracy and National Unity Day in Turkey. This is in memory of the coup attempt of 15 July 2016 that was foiled by the united and spontaneous resistance by the people of Turkey. The coup attempt was violent and deadly – The bombing and firing caused 250 deaths and left 2740 […]