Home » What project of Soviet scientists can save the Caspian from drying up?

The decrease in the water level in the Caspian Sea has again attracted public attention. Photos taken in the Baku village of Mardakyan appeared in the Internet. The art object “Marine swing”, which until recently were submerged in the waters of the Caspian Sea, this year turned out to be on land. The Caspian sea receded several meters, which caused concern among environmental activists. Ph.D. Anatoly Frolov, Senior researcher at the Institute of Water Problems of the Russian Academy of Sciences, commented on the situation with the decrease in the level of the Caspian in an interview to the Moscow-Baku portal. 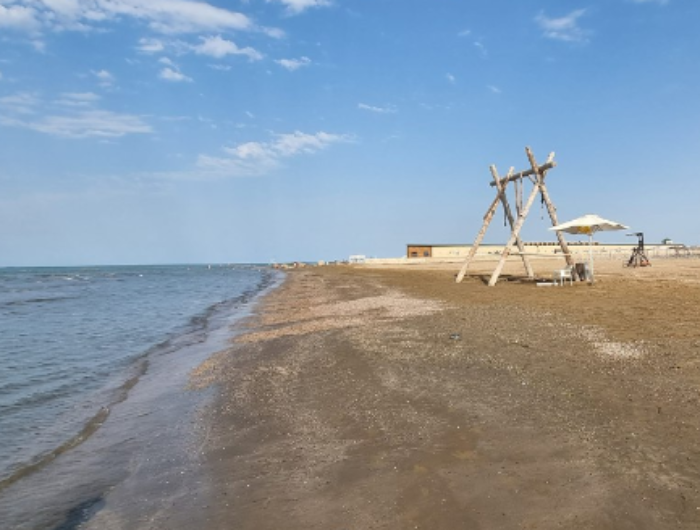 Q: How long has the topic of water fluctuations in the Caspian Sea been raised, and how actively is it being studied in Russia?

Q: Why is the water level in the Caspian Sea not stable, why is it getting shallower today?

Dr.Frolov: The simplest answer to this question is a water deficit. It occurs due to a decrease in the flow of river water and an increase in evaporation in the water area of the reservoir. Evaporation changes little, and the reduction of river inflow contributes more. Currently, the decrease in river inflow occurs due to the intake of water from the water balance of lakes. At one time, a potent threat to the intake of the waters of the Caspian Sea posed by the plans for the development of irrigation on the left bank of the Volga. If these plans were implemented, up to 70 cubic km/year would be withdrawn from the water balance of the Caspian Sea annually. Whereas the total inflow at that time was about 300 cubic km/year. 70 cubic kilometers is a huge amount, since the withdrawal of even 10 cubic kilometers lowers the level of gravity of the sea by one meter. Accordingly, lowering the level by 4 meters would actually mean the disappearance of the northern part of Caspian Sea after some time. If such withdrawal of water from the Caspian Sea begins today, then sturgeon species of fish will die. After all, the northern part of Caspian sea is a kindergarten for sturgeon. Only in its waters they can feed. If there is no northern Caspian, then sturgeon will practically vanish, and the fish productivity of the Caspian will drop sharply. Such a threat may arise due to human activity. In addition, at the moment, there are completely unpredictable climate changes on the globe, which today are not yet amenable to science. But the closest and most dangerous prospect is still the withdrawal of water from the tributaries of the Caspian Sea. At the moment, these withdrawals have stabilized, although a potential danger really exist.

Q: Besides the disappearance of sturgeon fish species, what else can the shallowing of the Caspian Sea affect?

Dr.Frolov: An immediate consequence of the current decline in sea level is a decrease in the depth of ports throughout the water area, and sea channels in the shallow northern Caspian. Accordingly, spending on maintaining navigable depths will increase. The “emergence” of gas and oil pipelines can also cause problems due to the risk of waves and other negative effects. The lowering of the sea level leads to declining the comfort of the recreational coastal zone due to the deviation of the coastline. The longer-term consequences of a prolonged and significant decrease in the level of the Caspian Sea will lead to desertification of part of the coastal territories. In the deltas of the Caspian rivers – Volga, Ural, Terek, Kura and other rivers, in wetlands connected with the sea, adverse environmental changes in the living conditions of fauna and flora will occur. And this is only part of the most obvious consequences of the retrogression in the level of the Caspian Sea.

Q: Can a man control the level of the Caspian Sea today?

Dr.Frolov: This question has been asked since Soviet times. It was then that we started working on various projects, which, fortunately for us, did not materialize into reality. For example, there was a project to install a dam cutting off the Northern Caspian in order to decrease evaporation. If the project had been implemented and a dam had been installed, it would have been the end of sturgeon, and at that time in the Caspian Sea accounted for 80% of all world reserves of sturgeons. Another project was wrapped up at our institute due to environmental considerations. It envisaged the construction of a canal connecting the Caspian Sea with the Black Sea. Such a junction of waters would destroy the flora and fauna of the Caspian Sea. Time has passed, and today the question on possibility to control the level of the Caspian Sea is still relevant. But the answer is still impossible to find. Why? I’ll explain. For example, to drive a car, you need a steering wheel and human power. But if you put a child behind the wheel, he will not have enough power to drive a car. The same is true with the Caspian Sea. It is not yet possible to manage the level of the Caspian Sea. Natural processes can behave in such a way that we cannot cope with the management. Where from to get water in cases of shortage? There are simply no such stocks. Unless you connect the Caspian Sea with the World Ocean with the help of a channel. By the way, we have been working on such a project. This is the exit from the Caspian Sea to the Persian Gulf through Iran. But such projects are very ambiguous, in the sense that it is impossible to estimate the environmental consequences.

Q: But one project was still implemented?

Dr.Frolov:  – Of all the possible and developing projects on the impact on the water level in the Caspian Sea, one project was implemented, and even that was not very successful. This is the cutting off of the Kara-Bogaz-Gol Bay from the Caspian Sea. The dam was erected at the end of 1980, against the background of a decrease in the water level in the Caspian Sea to minus 29 meters in 1977. The dam stopped the outflow of water, and everything would have been fine, but… the sea level began to rise already in 1978, and the rise continued until 1995. Initially it was planned to build a regulated facility, but a blind dam was constructed. Therefore, in 1992, by mutual consent of Iran and Turkmenistan, the dam was destroyed, and the Caspian water rushed into the Kara-Bogaz-Gol Bay. Now the water level in the Caspian Sea is again in the minus 29 meters zone, and the public should pay attention to this. If the level reaches minus 31 – minus 32 meters, it will be a big problem that will lead to the elimination of the northern part of Caspian sea. Two deep-water reservoirs may remain from it, and this will not be the Caspian Sea that we have. Such a danger really exists. It is possible to prevent or mitigate the current lowering of the Caspian Sea level. For example, in case of the consent of Turkmenistan and with the joint efforts of all the Caspian countries, it is possible to build and put into operation regulated facility in the strait, connecting the Caspian Sea and the Kara-Bogaz-Gol Bay. This will ensure the saving of seawater up to 18-20 cubic km/year.

Q: What is the uniqueness of the Caspian Sea?

Dr.Frolov: Any lake, river, sea, ocean are unique reservoirs. And each of them has its own environmental problems. The basin of the Caspian Sea is about three million square kilometers. And the problem of the fluctuation of its waters, which we are talking about now, is of a global nature. The Caspian Sea is literally a miracle of nature. The largest reservoir in the world, isolated from the World Ocean, containing real treasures – bioresources, large reserves of hydrocarbons. The sea, which is of crucial importance as a transport communication for the five Caspian countries … The Caspian Sea is unique in everything: from flora and fauna to the morphometry of the sea … It can take too long to name them all. The task of man is to preserve such unique reservoirs as the Caspian Sea. Then we will not have any fears that the Caspian Sea may become shallow, or even disappear from the map of the Earth.

///Originally published by Information portal “Moscow-Baku” on 24 June 2022, link to the article – https://moscow-baku.ru/news/society/kakoy_proekt_sovetskikh_uchenykh_mozhet_spasti_kaspiy_ot_vysykhaniya_intervyu_moskva_baku_/ )