On 8 June 2022, the third meeting of foreign ministers in the format “Central Asia – China” was held under the chairmanship of Kazakhstan in Nursultan. 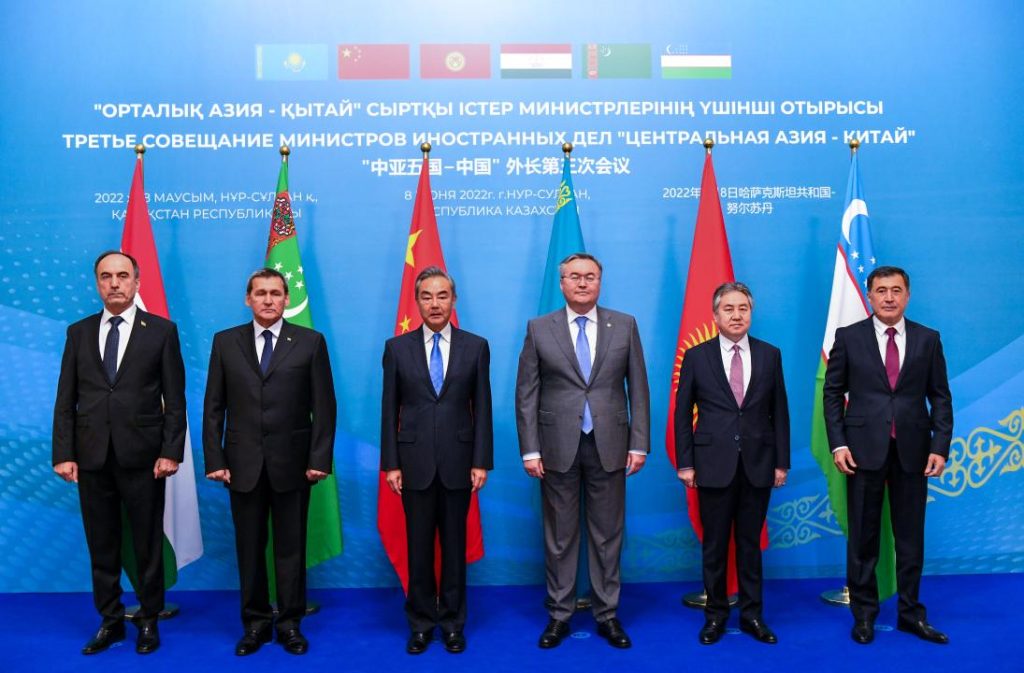 During the meeting, the ministers discussed ways to implement the initiatives announced by the heads of state first summit Central Asia-China on 25 January 2022.

The heads of delegations noted that further expansion of multifaceted cooperation between the Central Asian states and China is an important factor in sustainable socio-economic development, maintenance of peace, stability and security in the region.

The parties emphasized the interest in strengthening cooperation within this format, revealing its significant opportunities and turning the Central Asian region into a space of peace, friendship, mutual assistance, sustainable development and harmony. 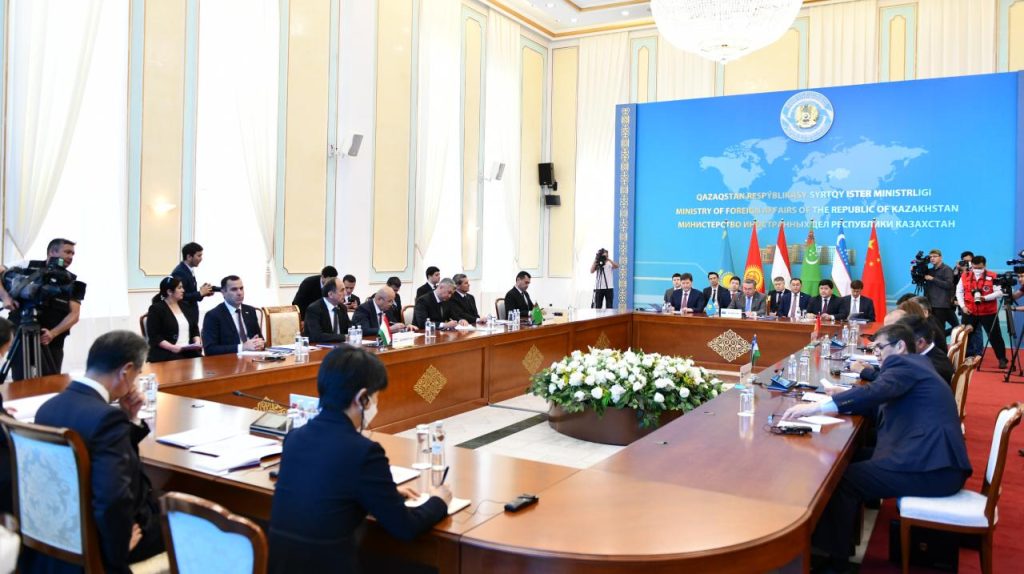 During the meeting, special attention was also paid to the Afghan problem, joining efforts to combat new threats and challenges, working together to overcome the consequences of the pandemic, and a number of other important issues.

The parties hailed China’s constructive role in preventing the humanitarian crisis in Afghanistan, and pledged jointly devote to promoting peace and reconstruction in Afghanistan.

In the face of new challenges posed by the turbulent international situation, Central Asian countries and China expressed their readiness to enhance bilateral and multilateral coordination, safeguard sovereignty, security and national values, support the purposes and principles of the UN Charter, jointly fight such evils as terrorism, separatism and extremism, maintain food security, peace, stability and development in the region and Asia.

During his address at the meeting, foreign minister of China  Wang Yi said that two years ago, the mechanism for the C+C5 foreign ministers’ meeting was established. Over the past two years, the parties have worked together to fight the pandemic, focus on economic recovery and promote regional stability, achieving tangible results. 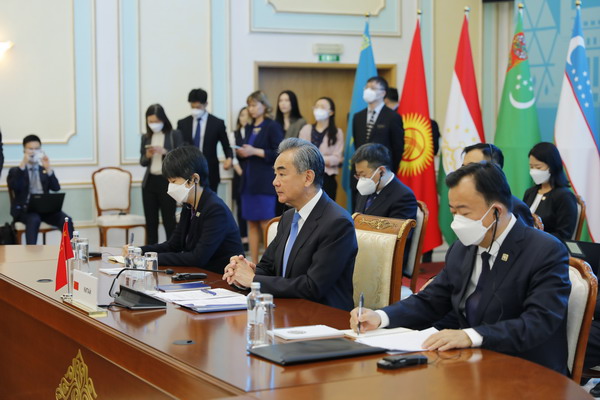 Wang Yi said, currently, as the once-in-a-century changes and pandemic as well as the Ukraine crisis continue to wreak havoc on the international political, economic and security systems, the world finds itself in a new period of turbulence and transformation. Facing a world of chaos and changes, what kind of Central Asia to be built and how to promote relations between China and Central Asian countries are major issues that we must properly resolve.

First, improve the institutional pillars for cooperation among the six countries. It is of great strategic significance to establish a mechanism for the C+C5 heads of state summit. We should make elaborate preparations and give full play to the leading role of the head of state diplomacy. We should actively carry out exchanges and dialogues in various fields. China will host forums at the sub-national level and on think tanks, industry, investment, economic and trade cooperation to unleash the potential of C+C5 cooperation in an all-round, multi-tiered and multi-dimensional manner.

Second, build a robust engine for post-pandemic recovery. We should pursue high-quality Belt and Road cooperation and accelerate the synergy of development strategies. We should actively advance the natural gas pipeline project, ensure the safe operation of major arteries such as the China-Europe freight trains, speed up the China-Kyrgyzstan-Uzbekistan Railway project, and support the construction of the Trans-Caspian International Transport Corridor. We should expand cooperation in emerging areas and jointly build a digital Silk Road and a green Silk Road. We should explore new cooperation formats in modern agriculture and safeguard agricultural security in the six countries. We should explore ways to promote financial cooperation and further increase the scale of local currency settlements.

Third, build a solid fortress for regional peace. We should coordinate efforts to safeguard security in both traditional and non-traditional areas, deepen security cooperation for jointly building the Belt and Road Initiative, and pool efforts to combat the three forces of terrorism, separatism and extremism, drug trafficking, and transnational organized crimes. We should stay united to fight the COVID-19 pandemic and put up multiple lines of defense. We should strengthen cooperation on work safety and disaster management and improve the capacity and level of emergency management. We should continue to make good use of the Foreign Ministers’ Meeting on the Afghan Issue Among the Neighboring Countries of Afghanistan, the SCO-Afghanistan Contact Group and other mechanisms.

Fourth, explore multiple paths for people-to-people and cultural exchanges. We should promote the establishment of cultural centers in each other’s country and carry forward the positive energy of friendship from generation to generation. We should implement the “One Country, One Workshop” plan to cultivate high-quality skilled talents. We should strengthen cooperation and share experience in poverty alleviation. We should step up cooperation in areas such as climate change, biodiversity conservation and environmental protection technology, and jointly build a beautiful homeland where humanity and nature exist in harmony.

Fifth, pool positive forces for global governance. We should implement the Global Development Initiative and Global Security Initiative and build a community with a shared future for mankind. We should uphold the purposes and principles of the UN Charter, practice true multilateralism, promote the common values of humanity, and support all countries in safeguarding their core interests.

Wang Yi stressed that China will not stop its pace of development and revitalization and will not waver over its resolve to cooperate with other countries. China will continue to be an important contributor to world economic growth and a firm defender of international equity and justice. A developing and prosperous China not only augurs well for the world, but also brings new opportunities for the development of Central Asian countries. [based on MFA China press release]

During his remarks the foreign minister Meredov praised the fruitful course of the political and diplomatic dialogue aimed at enhancing the strategic partnership of the Central Asian countries and China, in line with the agreements reached by the heads of state.

In this context, Meredov focused on the prospects of energy and transport cooperation between Central Asia and China. 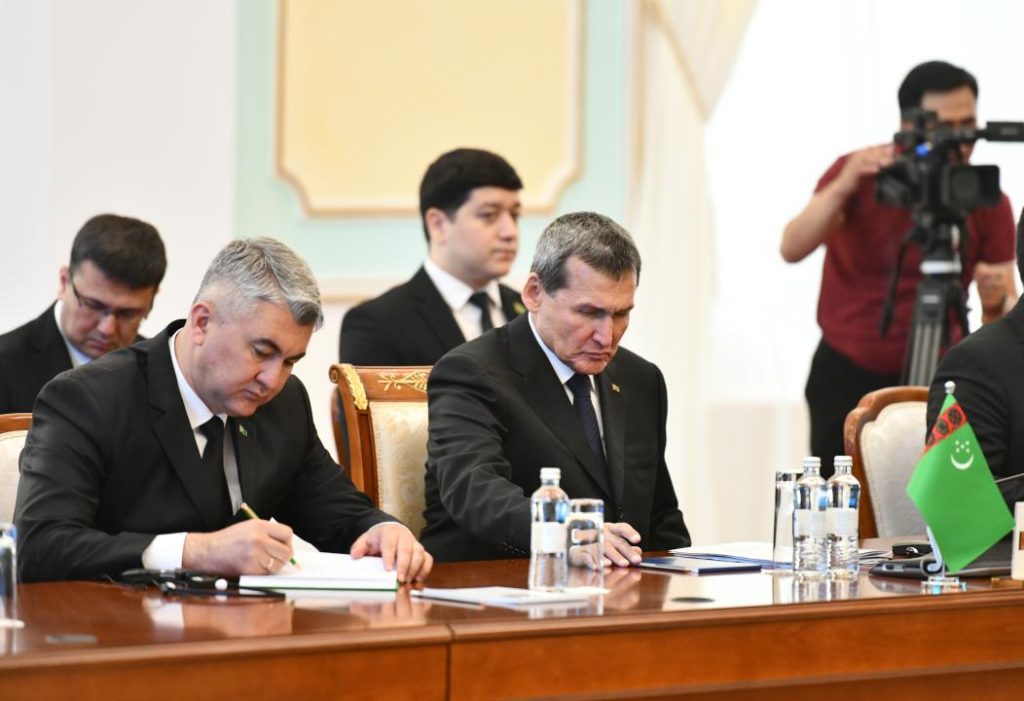 He expressed Turkmenistan’s readiness to consistently increase natural gas supplies to China through the territory of Central Asia.

In this context, it seems natural to use the capabilities of Turkmenistan’s port infrastructure on the Caspian Sea, he stressed.

The session adopted the following documents:

The Roadmap covers strategic areas such as security, transport and logistics, energy and industry, the fight against climate change, the “green” economy, the IT industry, healthcare, education, culture, tourism and other important areas.

The Joint Statement of the Foreign Ministers of the participating countries reflected the outcomes of the consultations and outlined the main goals for the medium term.

The chairmanship in China+Central Asia foreign ministers’ meeting has transferred from Kazakhstan to China. The fourth forum will be held in China.

After the meeting, Wang Yi and Mukhtar Tleuberdi spoke at the joint press conference.

“The joint statement of the foreign ministers of the participating countries adopted at the end of the meeting summed up the productive consultations that took place within the framework of today’s meeting. Today Kazakhstan has completed its chairmanship in the format. According to the general decision of the ministers, this important mission — to head the next fourth forum – has been transferred to China,” Kazakhstani Foreign Minister said. 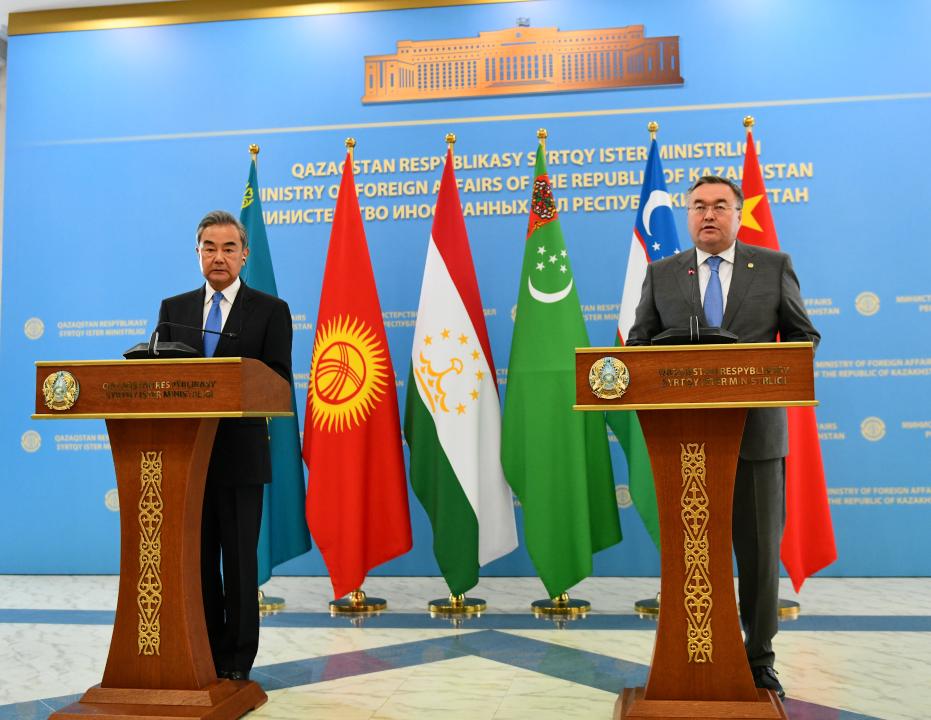 Tleuberdi expressed confidence that the meeting will contribute to laying a solid foundation for further growth of mutually beneficial comprehensive cooperation within this format, as well as facilitate the transformation of the region into a space of peace, friendship, stability, mutual assistance, sustainable development and harmony.

“The participants of the meeting came to a consensus that the Central Asia+China format is achieving its goals from year to year, increasing its potential and efficiency,” he stressed.

According to MFA China, Wang Yi summarized the ten-point consensus reached at the meeting:

The first is to uphold the principle of mutual respect, good-neighborliness and friendship, solidarity in trying times, mutual benefit and win-win results, and commit to building an autonomous, peaceful, prosperous and cooperative Central Asia.

The third is to deepen the cooperation of connectivity, ensure the safe and stable operation of the China-Europe freight train, promote customs clearance facilitation, improve the “green lanes” for cargo, and accelerate the resumption of flights to ensure the complete industry chain and the continuous supply chain.

The fourth is to maintain security in traditional and non-traditional areas in a coordinated manner, cooperate to fight the three forces of terrorism, separatism and extremism, and ensure food security.

The fifth is to continue to work together to fight the pandemic, actively carry out cooperation in vaccine and drug research and development, establish the China-Central Asia health industry alliance, and set up a Chinese traditional medicine center in Central Asia.

The sixth is to coordinate positions on the situation in Afghanistan in a timely manner, promote peaceful reconstruction in Afghanistan, support Uzbekistan in hosting the fourth Foreign Ministers’ Meeting Among the Neighboring Countries of Afghanistan and the High-level International Conference on Afghanistan Issue, and maintain regional security and stability.

The seventh is to deepen cooperation in education, science and technology, arts, sports, tourism, poverty reduction and other areas, and promote work on the “One Country, One Workshop” and the mutual establishment of cultural centers.

The eighth is to promote green and sustainable development, share experience and technology in environmental protection, and build a beautiful home featuring harmonious coexistence between man and nature.

The ninth is to continue to support each other on issues related to each other’s core interests, jointly implement the Global Security Initiative and the Global Development Initiative, and make contributions to global governance.

The tenth is to continue to improve the C+C5 cooperation mechanism, actively carry out exchanges and dialogues in the fields of political parties, economy and trade, investment, think tanks and at the sub-national levels, and fully release the cooperation potential among the six countries.