During the conversation, Ms.Amina Mohammed noted that she was very glad to visit independent neutral Turkmenistan, one of the most dynamically developing countries and a long-standing, reliable partner of the UN in the Central Asian region. 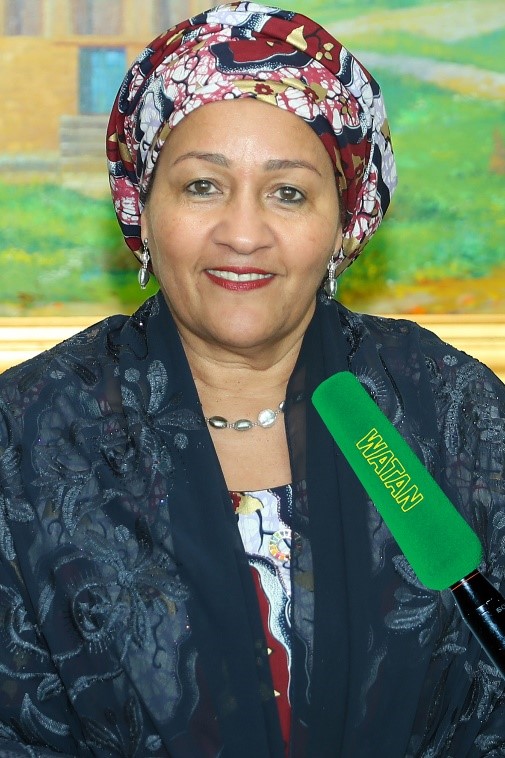 Turkmenistan attaches particular importance to cooperation with major international organizations, first of all with the UN, which is a platform for conducting a productive and effective dialogue on topical issues of our time, President Serdar Berdimuhamedov said.

During the meeting, the sides exchanged views on the state and prospects for the development of cooperation, discussed possible areas of joint work within the framework of the implementation of the SDGs agenda.

The first Deputy Secretary-General of the UN thanked Turkmenistan for its active involvement in addressing urgent problems for the world, such as ensuring global energy security, developing broad international cooperation in the transport and logistics, rational use of resources, climate change, as well as environmental protection.

Ms.Amina Mohammed expressed the UN’s deep interest in further deepening and steadily building up the traditional partnership that meets the interests of the well-being of all mankind and the UN Sustainable Development Goals.

In turn, President Serdar Berdimuhamedov stressed that Turkmenistan intends to continue to take an active part in international efforts in strategically important areas.

Turkmenistan became the first leg of UN Deputy Secretary-General’s tour to the countries of the Central Asia. She will also participate in the second International Decade for Action: Water for sustainable development international conference in Tajikistan. ///nCa, 7 Jun 2022

Here are the relevant press releases by UN Turkmenistan and MFA:

They discussed the need for a transformational recovery from COVID-19, opening of data for all users for the evidence-based policy making and effective support from the UN development system in addressing the development challenges, enhancing a regional dialogue to address impacts of climate change and opportunities for establishment of a regional centre for climate change mitigating technologies in Ashgabat. They also stressed importance of strengthening regional trade and infrastructure to boost economic growth and maintain peace and stability.

At the meeting with Mr. Rashid Meredov, Minister of Foreign Affairs of Turkmenistan, the Deputy Secretary-General exchanged views on the progress in achieving the Sustainable Development Goals. The Deputy Secretary-General and the Foreign Minister reflected on ensuring gender equality and empowerment of women and girls. They also talked about climate action, the importance of ensuring the fundamental freedoms and human rights protection under the Universal Declaration of Human Rights.

The Deputy Secretary-General met with Ms. Gulshat Mammedova, Chairperson of the Mejlis of Turkmenistan. The Deputy Secretary-General reflected on the importance of the role of Parliament in monitoring the implementation of National Human Rights Action Plans. She had a rich and frank exchange with civil society organizations including Women’s Union, Yenme, Keyik Okara and women entrepreneurs whereby she stressed importance of ensuring gender equality and women empowerment.

In addition, the Deputy Secretary-General held a discussion with the UN Country Team and met with UN staff to learn of initiatives and efforts underway in support of Turkmenistan and the Central Asian region.

The Deputy Secretary-General noted the hospitality of the Turkmen Government and its people  and assured all interlocutors of the readiness of the United Nations Development System to continue supporting them in realization of their national aspirations  which are firmly rooted in the Sustainable Development Goals. ///UN Turkmenistan

On June 6, 2022, the Deputy Chairman of the Cabinet of Ministers, Minister of Foreign Affairs of Turkmenistan Rashid Meredov had a meeting with the Deputy Secretary-General of the UN, Chair of the UN Sustainable Development Group Amina Jane Mohammed.

During the meeting, the parties highly characterized the cooperation between Turkmenistan and the United Nations in a wide range of spheres. Particular emphasis was placed on the importance of combining efforts in the implementation of the 2030 Agenda and the national sustainable development goals in Turkmenistan.

The head of the foreign policy office of Turkmenistan noted that Turkmenistan is carrying out systematic work to intensify multilateral efforts to strengthen the stability of international transport systems in emergencies.

Meredov also noted that Turkmenistan supports the holding of the Education Transformation Summit in September 2022 in New York during the high-level week of the seventy-seventh session of the UN General Assembly. It was emphasized that Turkmenistan is working to improve the national education system and ensure equal access to quality education and plans to start national consultations in the near future in preparation for this Summit.

In addition, the parties discussed issues related to environmental protection and the National Strategy of Turkmenistan on climate change. In this regard, it was stated that Turkmenistan is an active participant in the global campaign initiated by the UNECE “Trees in Cities” to support actions related to climate change in cities. ///MFA Turkmenistan, 6 Jun