You are here: Home / Articles And Reports / Ukraine Quandary – Part 3 – A promise that looked like a Gentleman’s word in 1990

Putin’s anger stems from his belief that a promise was broken that led to the eastward expansion of NATO. The map here shows how the alliance has acquired 14 new members since then: 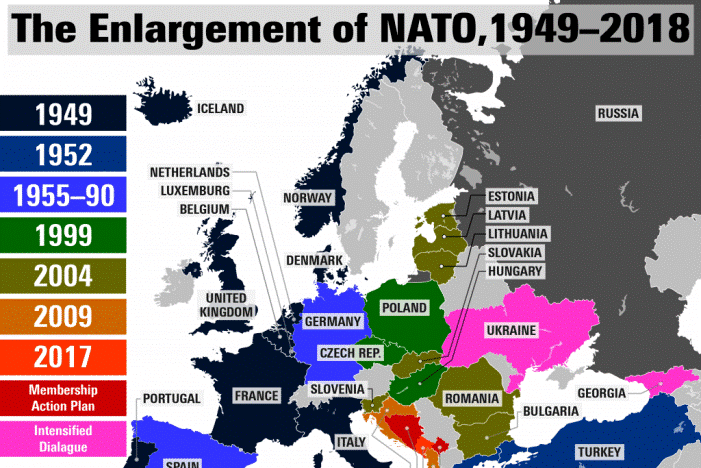 Putin’s claim is contested on several grounds but the fact remains that there was certainly the verbal assurance from the people who mattered back then that NATO will not go east.

A Guardian story published on 12 January 2022 with byline of Patrick Wintour sheds light on the matter.

Here are some quotes from analytical article of Wintour titled ‘Russia’s belief in Nato ‘betrayal’ – and why it matters today’:

Speaking of the roots of Putin’s anger, Wintour says, “At one level it narrowly focuses both on verbal commitments made by the US secretary of state James Baker under President George HW Bush and the terms of a treaty signed on 12 September 1990 setting out how Nato troops could operate in the territory of the former East Germany.”

He says, “Putin claims that Baker, in a discussion on 9 February 1990 with the Soviet leader, Mikhail Gorbachev, made the promise that Nato would not expand to the east if Russia accepted Germany’s unification.”

“The following day Chancellor Helmut Kohl, ambiguous about Germany remaining in Nato after unification, also told Gorbachev “naturally Nato could not expand its territory to the current territory of the GDR”. The promise was repeated in a speech by the Nato secretary general on 17 May, a promise cited by Putin in his Munich speech. In his memoirs, Gorbachev described these assurances as the moment that cleared the way for compromise on Germany,” he adds.

Of course, Russia took these promises as Gentleman’s word. That is why Boris Yeltsin, then president of Russia, wrote to President Bill Clinton in 1993 that any further expansion of NATO eastwards breached the spirit of the 1990 treaty.

Here is what Patrick Wintour writes furthen down in his piece: The US state department, undecided at the time about Poland’s call to join Nato, was so sensitive to the charge of betrayal that Clinton-era officials even asked the German foreign ministry formally to report on the complaint’s merits. The German foreign minister’s top aide replied in October 1993 that the complaint was formally wrong but he could understand “why Yeltsin thought that Nato had committed itself not to extend beyond its 1990 limits”.

The complete Guardian story can be found at this link: https://www.theguardian.com/world/2022/jan/12/russias-belief-in-nato-betrayal-and-why-it-matters-today

What is generally ignored by the supporters of NATO expansion is that the issue has divided the people of Ukraine, with majority not in favour of NATO membership.

Gordon M. Hahn has written a detailed and fact-based piece on the issue. Titled ‘NATO expansion’s open door policy and war or peace in the Donbass,’ it was published by The Transnational on 25 July 2019.

Here are some quotes from his article:

“[T]he NATO/western Ukraine nexus confounds resolution of the Donbass civil war. On the one hand, western Ukraine is the only one of Ukraine’s mega-regions that supports Ukraine becoming a NATO member, a policy NATO also supports.

“On the other hand, western Ukraine is the only mega-region in Ukraine that opposes all the measures that could address the grievances that drive Donbass resistance to Kyiv. All the other mega-regions have majorities that support some of the compromises that might resolve the civil war.

“In this way, western Ukraine, representatives of which dominate Ukraine’s Maidan government, are holding the rest of Ukraine hostage to its nationalist/ultra-nationalist orientation; an orientation that is supported in turn by the West’s policy of NATO expansion.

“Therefore, the issue sharply divides western Ukraine from the rest of the country, where universally there are strong majorities against Ukraine becoming a member of the military bloc.”

The Transnational article can be found here: https://transnational.live/2019/07/25/nato-expansions-open-door-policy-and-war-or-peace-in-the-donbass/