You are here: Home / Articles And Reports / Eurasian Congress: Energy and water integration in Central Asia under the spotlight

How to create a unified management system for the water and energy complex of Central Asia and how to maximize the opportunities for joint operation of the energy systems of the countries of the region – these and other issues were discussed during the panel session “Efficient water and energy complex – the basis for the prosperity of Central Asia” at the site of the Second Eurasian Congress, hosted by Moscow last week. 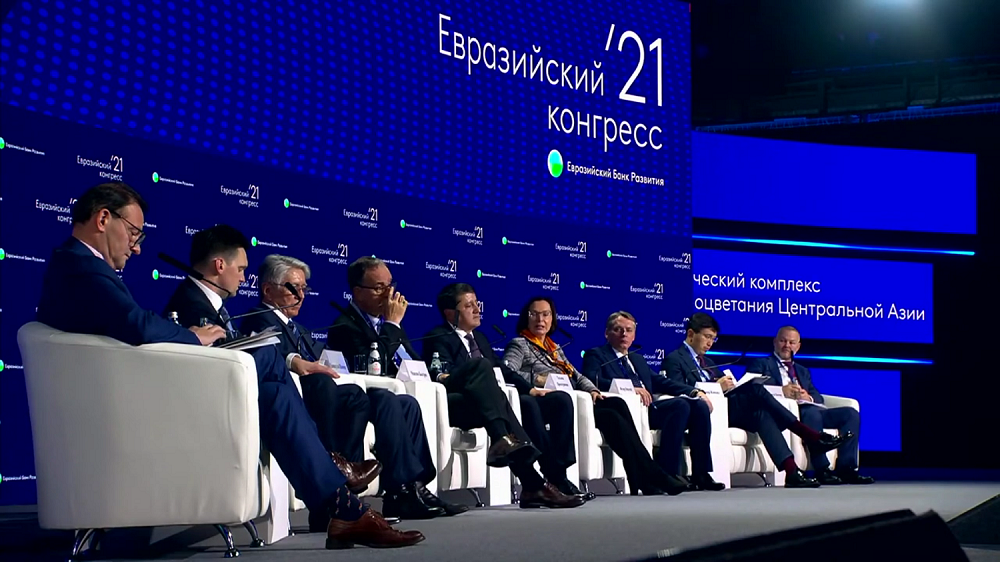 The estimates of the Eurasian Development Bank (EDB) shows that irrational use of the water and energy resources of Central Asia has led to annual losses of economic benefits worth over 1.5% of regional GDP, including 40% of GDP losses associated with water management and 60% – with electricity.

Unfavorable forecasts on water scarcity require immediate and decisive actions. One of the possible measures is to realize the potential of joint work of the energy systems of the Central Asian countries simultaneously with the wide adoption of drip irrigation in crop production, as well as comprehensive modernization of irrigation systems.

The creation of a common management system for the water and energy complex of Central Asia will allow obtaining synergistic effects in the economy and ecology of the region.

“Energy and water are the main sources of economic growth in Central Asia,” said Nikolai Podguzov, Chairman of the EDB Management Board, speaking at the session.

The economic growth of the region is driving an increase in electricity demand, which requires a regional approach to energy security.

Podguzov noted that when “everything is tied to water resources, then suboptimal water use causes very serious problems.”

77% of Central Asia’s water resources are concentrated in the upper reaches of the Amu Darya and Syr Darya rivers – in Kyrgyzstan and Tajikistan. The downstream countries – Uzbekistan, Kazakhstan, and Turkmenistan – consume 85% of this water.

According to the expert, the water shortage in some parts of Central Asia reaches almost 26%. To meet the growth in energy demand, the region needs to create an additional 82 GW of power generating capacity.

However, if the Central Asian countries were exchanging energy, they will need 72 GW.  The difference of 10 GW costs US $22 billion, the head of the EDB explained. These funds could be invested in other sectors of the economy, for example, to invest in the development of irrigation systems.

In turn, investments in irrigation of agricultural land will yield the following economic dividends: the acceleration of economic activity by 1.5% of GDP growth, up to 40% of water savings with the introduction of advanced technologies, reduction of carbon dioxide emissions by 5 million tons due to the partial transition from coal power to hydropower.

Podguzov said that the EDB is dealing with these issues to ensure sustainable development in Central Asian countries through this project since energy and water are the main sources of economic growth.

The advantages and ways to improve the efficiency of joint work of the energy systems of the Central Asian countries were highlighted in the report by Fedor Opadchy, Chairman of the Management Board of JSC “Russian Power System Operator”.

In October, the company was granted observer status in the Coordinating Electric Power Council of Central Asia.

The head of the “Russian Power System Operator” recalled that the unified energy system of Central Asia, originating from Soviet times, is part of the synchronous zone of the Eurasian Power System and covers Kazakhstan, Kyrgyzstan, Uzbekistan, as well as the power systems of Tajikistan and Turkmenistan currently operating in an isolated mode.

He drew attention to the inadequate balance of national energy systems for electricity during the different seasons of the year, as well as the difficulties related to the regulation of the electricity regime.

The complicating factors also include the shortage of fuel and energy resources in the autumn-winter period, disagreements related to the use of transboundary water resources, the lack of a centralized control system for frequency and power flows.

According to Fedor Opadchey, a surge in electricity consumption and an increase in the share of renewable energy in the mix of generating capacities, characterized by variable and poorly predictable generation, have recently become serious challenges for the unified system of Central Asia.

Among the advantages of the joint operation of the power systems of the Central Asian states, Opadchy highlighted the following: reducing and maintaining the required power reserve to smooth out consumption peaks and mitigate emergencies, improving the technical and economic indicators of the power system due to optimal loading of the most efficient generators, mutual assistance in emergencies.

“The preservation and development of the joint work of our energy systems and the organization of a common electricity market will allow the optimal use of existing generating capacities,” he said.

The world is on the verge of an energy transition, with the large-scale introduction of renewable energy, the development of electric transport, hydrogen energy, the regulation of carbon emissions, the struggle for carbon neutrality. All these trends, in my opinion, significantly unlock the potential of development of Central Asian countries in the water and energy sphere, the Deputy Prime Minister stated.

Currently, the power systems of Russia, Kazakhstan, Uzbekistan, and Kyrgyzstan are working synchronously.

This enables these countries to ensure high reliability of energy supply and at any time to increase the supply of electricity between the countries in the required volume.

According to Alexander Novak, Russia supports EDB initiatives. “I have already given instructions on working out the issues of participation of Russian companies in investment projects for the development of the water and energy complex of Central Asia,” he added.

Tajikistan to return to the Central Asian energy system

Tajikistan will re-enter the unified energy system of Central Asia next year, Minister of Industry and New Technologies of Tajikistan Sherali Kabir said.

He also underlined that with the launch of the Rogun HPP, it will be possible to radically change the energy market and cope with the shortage of electricity in the region.

Meanwhile, the minister recalled that the Rogun hydroelectric project will provide additional irrigation of 300 thousand hectares of land. At the same time, one hectare will create three new jobs or a total of 10 million jobs. These jobs can be employed in agricultural production, which can be exported to the markets of Kazakhstan and Russia, where there is high demand, said the minister.

According to the minister, investments in the hydropower sector of Central Asia will enable addressing many other issues related to ensuring food security, critical imports.

When asked whether Tajikistan will continue to implement energy projects in the current situation in Afghanistan, Kabir replied that the realization of the CASA 1000 project will continue, since countries such as Pakistan are experiencing a shortage of electricity, which could be satisfied by the summer oversupply in Tajikistan.

Tatiana Proskuryakova, Regional Director for Central Asia of the World Bank, stated in his presentation that the World Bank would continue to work actively with Governments in the region to strengthen the water management framework of the energy sector and to enhance public investment opportunities.

In addition, the World Bank will maintain partnerships with Central Asian governments to strengthen the legislative framework and transparency for both public and private investments.

The World Bank programs implemented in the water and energy sector of Central Asia are estimated at the US $2.6 billion. These projects are aimed at expanding the access of local communities to drinking water, the development of water management in terms of competitiveness and job creation, the introduction of water-saving technologies.

About the Eurasian Congress

The Eurasian Congress has established itself as an influential platform for open dialogue between the governments and businesses in the Eurasian space. This year the forum discussed how businesses and public-private partnerships can play a greater role in unlocking the potential of Eurasian integration by enhancing production and technical cooperation, sharing advanced technologies, and building new value chains.

The Congress is organized by the Eurasian Development Bank (EDB) with the support of the Russian government. /// nCa, 6 December 2021