On September 21-22, 2021, President of Uzbekistan Shavkat Miromonovich Mirziyoyev visited the Republic of Karakalpakstan and Khorezm region to meet with voters of these regions.

As part of the trip, President Sh.M. Mirziyoyev arrived in the Republic of Karakalpakstan on September 21.

The head of state first visited the mausoleum of Musa Yerniyazov at the Shorsha Baba cemetery in the city of Nukus. Surahs from the Koran were read. 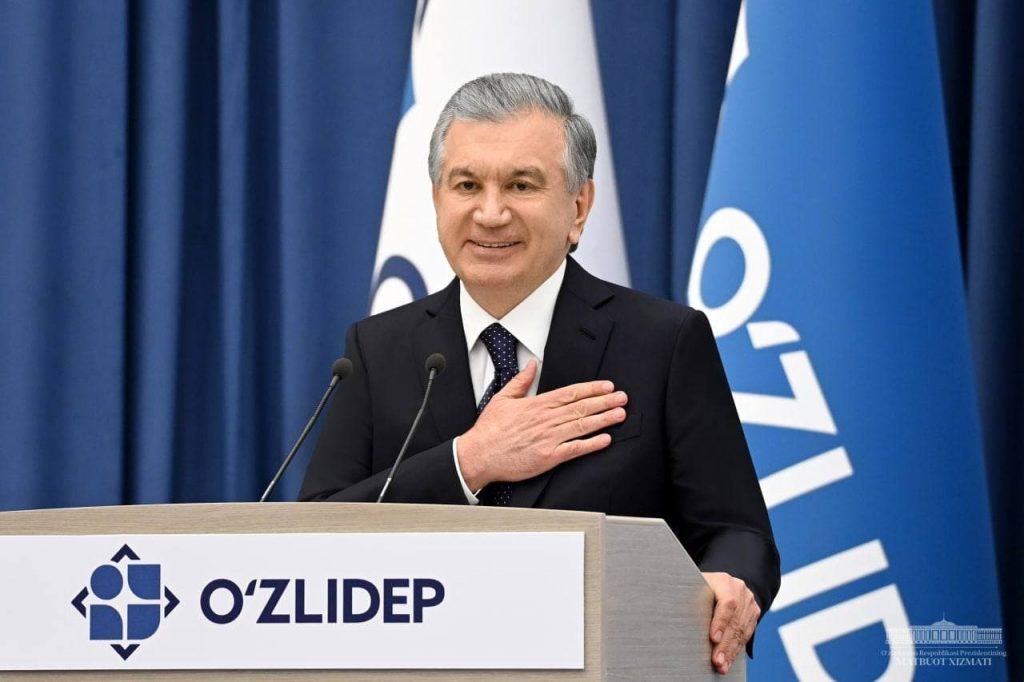 The head of state inquired about the life of the family, and on her example – the living conditions in Bozatau. Residents of Bozatau noted the ongoing changes in the area and thanked the head of state for his attention.

In Karakalpakstan, candidate for President of the Republic of Uzbekistan from the Movement of Entrepreneurs and Business People – Liberal Democratic Party of Uzbekistan Sh.Mirziyoyev met with voters in Bozatausky district.

During the meeting of the President Sh. Mirziyoyev made a report on his election program.

The candidate’s program consists of ten priority areas covering all areas. These are, in particular, building a new economy based on science and innovation, reducing poverty through active entrepreneurship and targeted financial support, increasing efficiency in agriculture, improving the quality of education, strengthening public health, balanced development of regions, the formation of people-oriented and humane public administration, ensuring justice and the rule of law, implementing an open and pragmatic foreign policy, developing cultural and spiritual spheres.

The changes that have occurred in Karakalpakstan over the past five years were noted. In particular, 2,500 investment projects worth more than $ 2 billion were implemented in industry, services and agriculture. The number of small businesses has doubled and amounted to almost 21 thousand. During this period, 83 thousand new permanent jobs were created.

Sh.Mirziyoyev also outlined his program for the development of the region in the next five years. In particular, plans were voiced to develop the economy, create a favorable infrastructure for entrepreneurship, provide water to the population and agriculture, and improve the environmental situation.

The head of state noted that the purpose of the meeting in Karakalpakstan is to enrich the program for the development of the region based on the proposals of local citizens, after consulting with such experienced leaders, respected aksakals of Karakalpakstan who know the life of ordinary people.
As part of the trip, President Sh. Mirziyoyev visited the children’s clinic at the Karakalpak Medical Institute.

Four years ago, the head of state laid the foundation stone for the institution. The complex was commissioned in September 2021.

The clinic is designed to serve 3.6 thousand inpatients and 22.4 thousand outpatients. Here, on the basis of high technologies, children with congenital and chronic diseases are diagnosed and treated. The departments of pediatric cardiac surgery, minimally invasive surgery, neurosurgery, ophthalmology, otorhinolaryngology, maxillofacial surgery, orthopedics and gynecology are equipped with modern equipment.

The hospital employs about 300 people. Professors and teachers, medical personnel have improved their experience in leading clinics in countries such as South Korea, Japan, Austria, Russia.

The President visited the children being treated here, talked with the mothers.

The institute has created modern conditions for the development of medical education, science and international cooperation.

The head of state also met with the students of the institute who are undergoing training here. The need to increase the number of classes on information technology in the field of medicine was emphasized.

During the meeting at the Youth Festival in Nukus, President Sh. Mirziyoyev noted that in the next five years, higher education coverage will reach 50 percent, for which branches of 6 prestigious universities of our country and foreign countries will open in Karakalpakstan.

It was noted that work aimed at creating opportunities for youth will continue. In particular, 55 new schools will be built, additional buildings for 187 schools, 135 schools will be overhauled.

In the next five years, more than 100 thousand young people will be trained in foreign languages and IT technologies in youth centers and secondary schools in every city and region. New dormitories for 6 thousand places will be built. 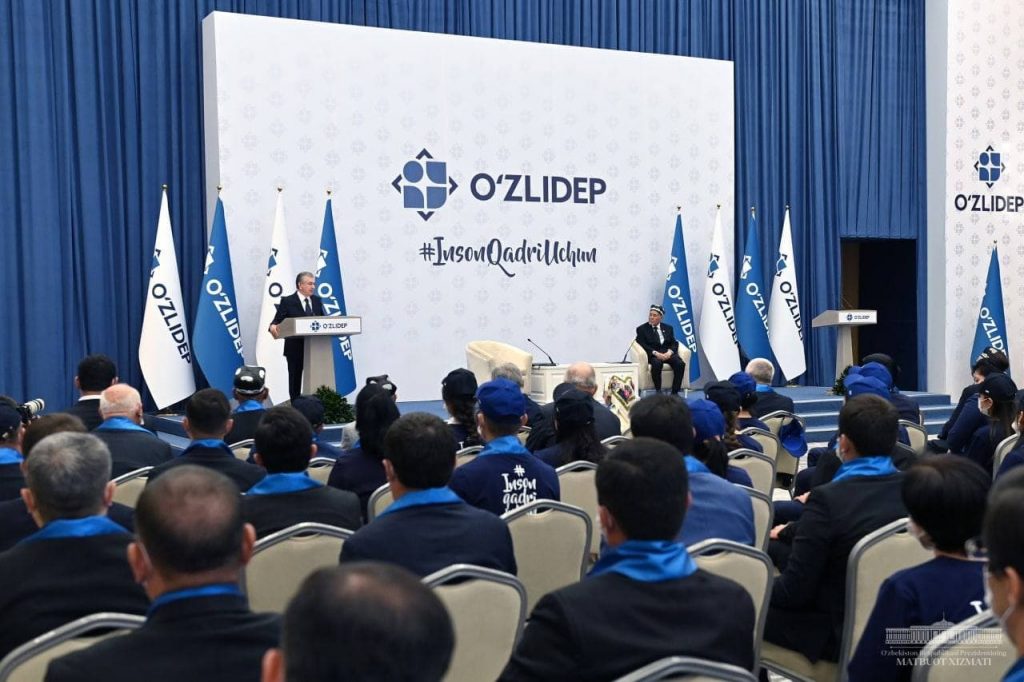 In the Year of Support for Youth and Public Health, a large-scale work was done in Karakalpakstan. 14 new schools were built in cities and regions, 4 new universities were opened.

On September 22, 2021, the President of the Republic of Uzbekistan Sh.Mirziyoyev, on his way from Karakalpakstan to Khorezm region, got acquainted with the construction of a bridge across the Amu Darya.

This project was presented to the head of state during his trip to the Khorezm region in December 2020, and construction work began soon. Currently, the banks are being strengthened with reinforced concrete structures, and bridge supports are being installed.

The project cost is $ 174 million. It is planned to build 80 kilometers of railways and a 413-meter bridge across the Amu Darya.

The effect of the project implementation promises to be significant. Thus, the railway communication between the Khorezm region and the Republic of Karakalpakstan will become closer by 240 kilometers, the travel time will be reduced by 6 hours. The volume of interregional cargo transportation will increase from 12 million to 25 million tons per year. The possibilities for international transit will also increase. Car traffic will improve, and it will be easier for people to reach their destination.

Then Shavkat Mirziyoyev left for the city of Urgench, where the head of state got acquainted with the construction of the Jaloliddin Manguberdy complex.

The project of the complex was discussed during the previous visit of the President to the region and was finalized taking into account the opinions of experts. The complex will occupy an area of about 8 hectares at the intersection of Al-Khorezmi and Islam Karimov streets. Now the foundation of the monument is being laid. A bronze monument to Jaloliddin Manguberdy was made in the image of a commander sitting on a horse and holding a sword. The total height of the monument will be almost 25 meters.

September 22, 2021 candidate for President of the Republic of Uzbekistan from the Movement of Entrepreneurs and Business People – Liberal Democratic Party of Uzbekistan Shavkat Mirziyoyev met with voters of the Khorezm region in the city of Khiva.

Presidential candidate Shavkat Mirziyoyev made a presentation on his election program.

The program consists of ten priorities aimed at bringing our country to a new level of development. This is the development of the economy based on science and high technologies, poverty reduction through active entrepreneurship and targeted financial support, increasing efficiency in agriculture, improving the quality of education and training competitive personnel, strengthening the health of the population, balanced development of regions, improving the system of public administration, ensuring the rule of justice and law, an open and pragmatic foreign policy, the development of the cultural and spiritual spheres.

The ongoing transformations in the Khorezm region were noted. Over the past five years, more than 7 thousand investment projects worth $ 2 billion have been implemented in industry, services and agriculture. 141 thousand new jobs have been created. 80 new hotels have been built. As a result of the reconstruction of the Toshsoka irrigation network, water supply has begun to 191 thousand hectares of land. 12 thousand housing units were built.

The candidate also outlined his program for the next five years. In particular, during this period it is planned to create more than 250 thousand new jobs in the region, including 100 thousand – due to the wide development of entrepreneurship in makhallas. A separate program will be adopted to increase the volume of tourist services by at least 5 times. 12 thousand hectares of cotton and grain fields will be reduced and leased to the population on the basis of an open tender. Also, plans were announced in the field of transport, education, health care, ecology and other social spheres.

On the same day, President Shavkat Mirziyoyev got acquainted with the activities of the Khiva carpet factory.

Previously, the building at the site of the enterprise was not used. In September 2020, a modern plant was organized here, and in August 2021, the implementation of the second stage of the project started.
The enterprise is equipped with energy-saving equipment from Germany, Belgium, Austria, Switzerland, Italy, France and Turkey. It produces polypropylene yarn, carpets and other products. They are exported to the USA, Russia, China, Kazakhstan, Kyrgyzstan, Turkmenistan and Tajikistan.

The head of state examined the technological process and showroom of the enterprise.

The plant has created 250 jobs. In 2022, the third stage will be implemented – a project for the production of yarn from acrylic fibers. As a result, the production capacity will reach 2.2 million square meters per year. It is expected that 45 percent of the products will be shipped abroad, and the annual exports will exceed $ 5 million.

The President gave instructions on expanding the range of products and creating similar enterprises in other regions.

That was the end of Sh.Mirziyoyev’s trip to Khorezm region. /// nCa, 27 September 2021 (in cooperation with Embassy of Uzbekistan in Turkmenistan)