You are here: Home / Articles And Reports / Salute to Joe Biden 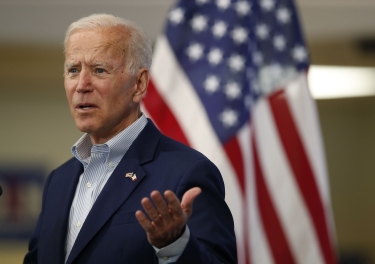 Salute to the courage, wisdom and foresight of Joe Biden.

He has proved that he is a great statesman in this age of shallow and cheap politicians. — He is a giant among pygmies.

The people who are criticizing the lightening-fast collapse of the Ghani regime on the decision of Biden to withdraw from Afghanistan are sadly mistaken. They must remember that Joe Biden is in the seat of decision-making; it is not his job to ensure clean and orderly implementation of the decisions.

The decision to withdraw from Afghanistan must be viewed quite separately from the way it took place. — The decision belongs to Joe Biden and its inept implementation belongs to the people who get paid for it.

There is no way to pin on Joe Biden the intelligence failure, the lackluster attitude of the State Department, the blurred lines between Pentagon and CIA, the misleading rhetoric of Ghani and his team, the incompetence of the Afghan partners, and the crushing weight of a long, expensive and purposeless war.

He did not start the war – he stopped it.

He could have kicked the can ahead just like two of his predecessors but he didn’t.

He was right in asserting that there was no other way to end this war, had it stretched for another 1, 5 or 20 years.

He was right in asserting that he doesn’t want to throw another generation of Americans into this inferno.

When he said this, he was speaking from personal experience. He has seen pain, tremendous pain from close quarters.

When this fog disperses and the historians can look at today’s events with clear eyes, there would be the consensus that Joe Biden was the right man at the right place at the right time.

We also know that the total withdrawal from Afghanistan was not an isolated decision, not an aberration. It is quite possibly the start of an uphill, long journey to repair the prestige and moral standing of the USA, which are in tatters right now.

We also know that Joe Biden recognizes the fact that starting a war “at the time and place of our choosing” has very serious and long term consequences. The fact is not hidden from him that victory is hardly ever the outcome of a war; there are only varying degrees of defeat.

We wish more Americans understood that Joe Biden has done great favour to them by ending this senseless war and thereby freeing the resources and energy for rebuilding the United States.