It was essentially a personal visit to show solidarity and support for the president and the people of Turkmenistan as the country is in bereavement on the sad demise of the father of the Turkmen president, Myalikguly Berdimuhamedov. 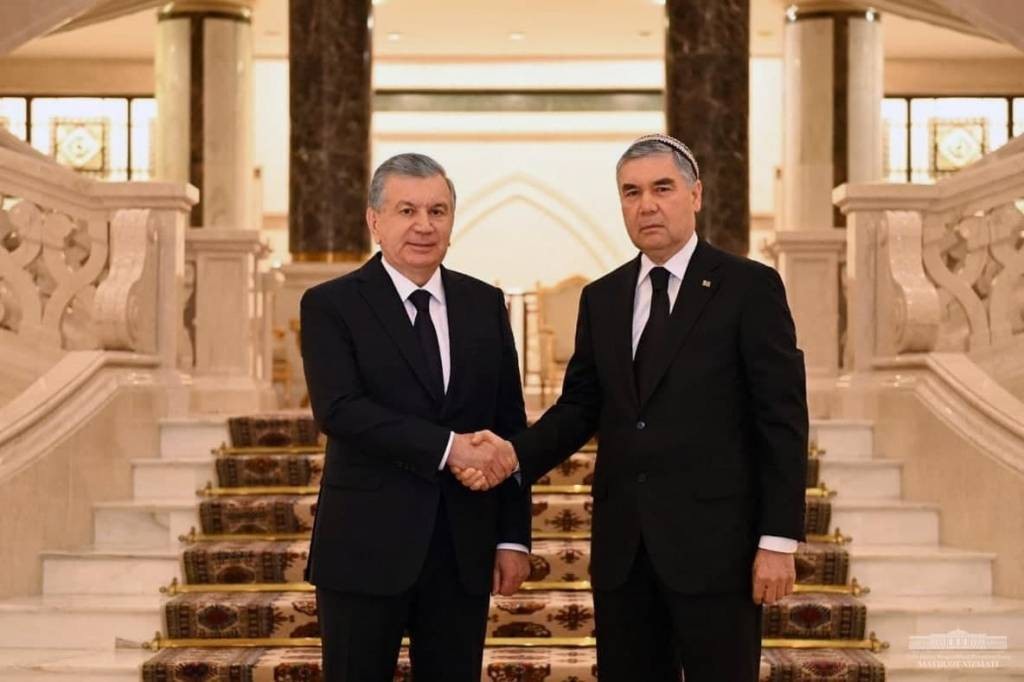 The primary nature of the visit was highlighted by the fact that President Mirziyoyev was accompanied by the Chief Mufti of Uzbekistan.

The presidents met at the Oguzkhan Palace where the Uzbek president on behalf of Uzbekistan people and his own behalf, once again expressed deep condolences to the Leader of Turkmenistan in connection with the passing of his father Myalikguly Berdimuhamedov.

The Chief Muftis of both the countries offered prayers at the mausoleum of the founding president of Turkmenistan.

They also jointly led the prayer service at the Iftar dinner [ritual meal at the end of the day’s fast].

This was the first Thursday since the demise of Myalikguly Berdimuhamedov – the first Anna agsham.

Traditionally, the people in the region gather for several Thursdays to offer prayers for the departed soul. 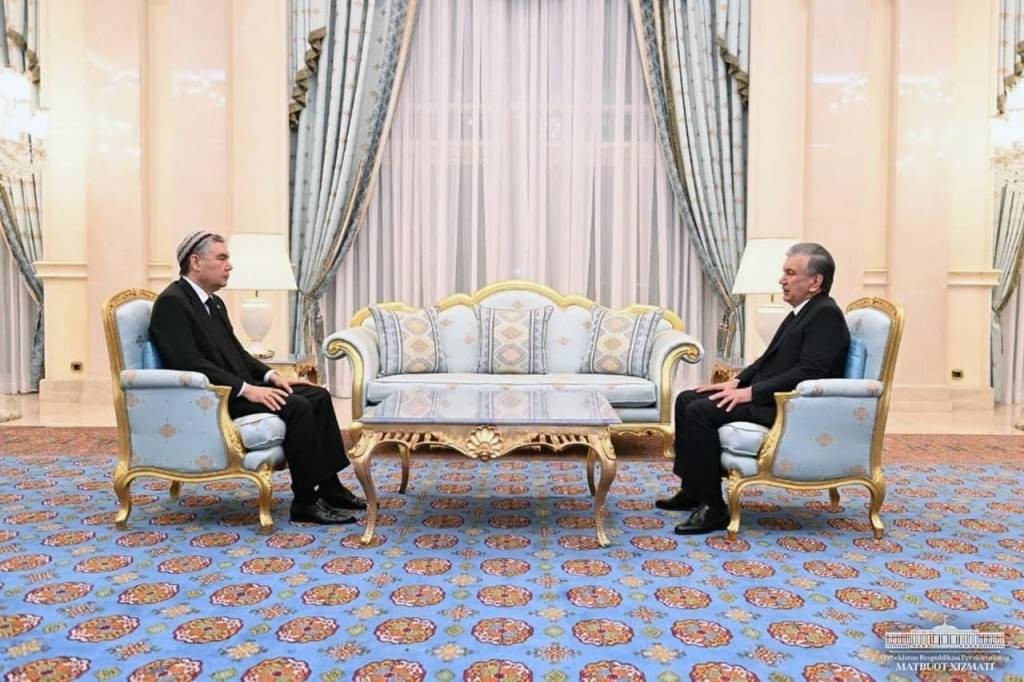 During the talks, the Presidents of Uzbekistan and Turkmenistan discussed the current issues of the bilateral agenda and regional interaction.

It was noted with satisfaction that despite the difficult period of the pandemic, a positive dynamic in the development of Uzbekistan-Turkmenistan relations at all levels is ensured.

In recent years, the trade turnover has more than tripled, reaching $530 million last year. Over 150 joint ventures have been established.

At the same time, attention was paid to the need for fuller use of the existing potential in trade, investment, industrial cooperation, primarily in transport, energy, mechanical engineering, light and food industries, agriculture and water management.

The readiness was expressed for further jointly promoting the Ashgabat Agreement on the creation of an international transport and transit corridor, as well as ensuring efficient loading of the multimodal route China – Central Asia – South Caucasus – Turkey and continuing interaction on the development of transport and logistics infrastructure.

During the talks, the urgency of enhancing and strengthening cultural and humanitarian cooperation, which is the most important factor in bringing peoples of the two countries closer together, was emphasized.

The President of Uzbekistan expressed his special gratitude to the President of Turkmenistan for his initiative to create the Tashkent Park in Ashgabat, which will become another vivid symbol of fraternal relations between the two countries. 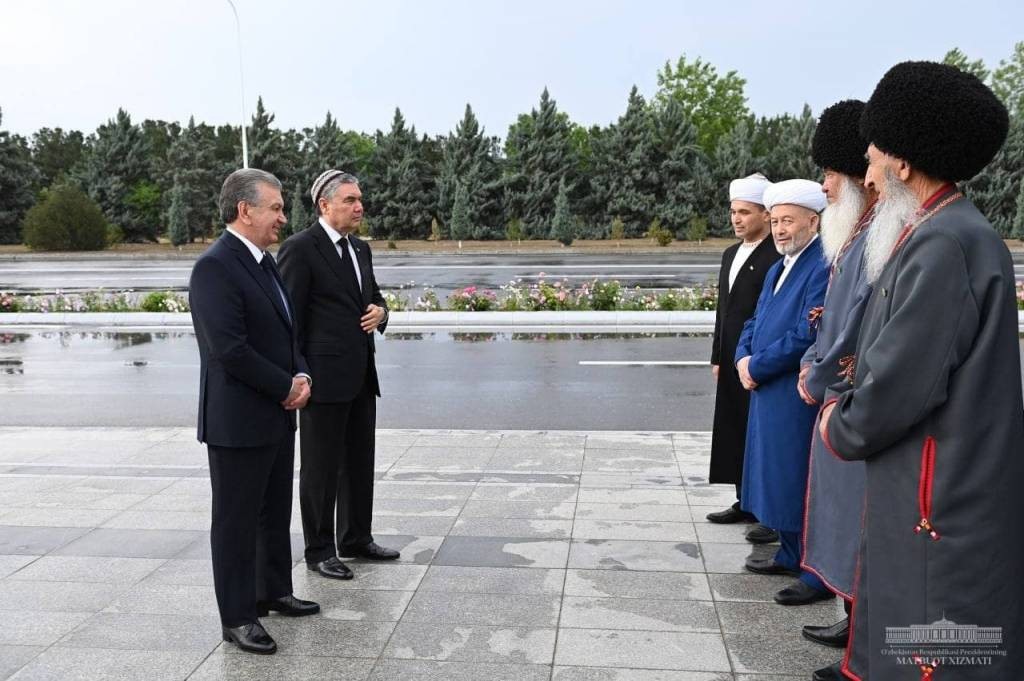 It was decided to hold soon in Tashkent the next meeting of Uzbekistan – Turkmenistan Intergovernmental Commission on Trade, Economic, Scientific, Technical and Cultural Cooperation to increase interaction and search for new growth points. 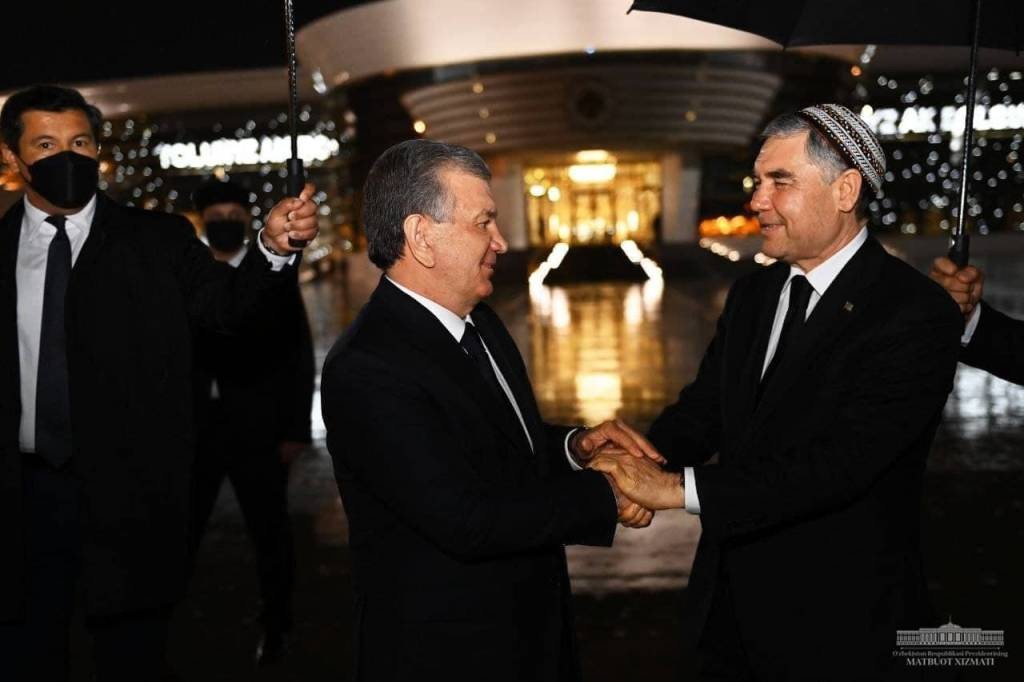 The Leader of Uzbekistan congratulated Gurbanguly Berdimuhamedov on his election as Chairman of the Halk Maslahaty of Milli Gengesh of Turkmenistan, which was clear evidence of the strong support by the people of Turkmenistan for the policy aimed at the prosperity of the country. [Some passages in this part of report taken from UzA]

The challenges are plentiful and continuously evolving. — Central Asia is gearing to take charge of its own destiny.

The visit of President Shavkat Mirziyoyev of Uzbekistan is a vibrant example of how the personal rapport helps deal with the shared challenges.

The pandemic, which is going through unpredictable mutations is obviously an enormous test – how to keep the economies growing despite obstacles; how to maintain the standard of living of the people.

However, there are many other challenges where the regional unity would actually be the strength we all need.

There is the situation in Afghanistan where a civil war could outbreak – some players would actually like that. The harm arising from the internal tussle in Afghanistan could possibly spill into Central Asia.

On the other hand, a plethora of complications is threatening to arise from the way Joe Biden is running his presidency. He is of frail health and in a hurry to get somewhere though it is not very clear where he wants to go, and more importantly, how.

Just recently Joe Biden recognized the war casualties of Armenians in 1915 as Genocide. This is a malignant decision, designed to drive wedge across the regions, right up to Central Asia.

Central Asia is not just politically but also ethnically related to Turkey.

The region has very good relations with Armenia but Biden’s utterance threatens to cloud it. The ethnic Armenians are important parts of societies in every country in Central Asia.

There is also the disguised intention to rekindle the Karabakh conflict.

On Wednesday, 28 April 2021, Joe Biden made his first speech to the joint session of the Congress.

He said, “We’re in a competition with China and other countries to win the 21st Century. We have to do more than just build back. We have to build back better.”

“We can’t be so busy competing with each other that we forget the competition is with the rest of the world to win the 21st Century,” he said.

Winning the 21st century? This immediately reminds of PNAC (Project for New American Century). Are the Neocons back in the driving seat?

Joe Biden said, “In my discussion with President Xi, I told him that we welcome the competition – and that we are not looking for conflict. But I made absolutely clear that I will defend American interests across the board.”

He added, “I also told President Xi that we will maintain a strong military presence in the Indo—Pacific just as we do with NATO in Europe – not to start conflict – but to prevent conflict.”

About Russia, he said, “With regard to Russia, I made very clear to President Putin that while we don’t seek escalation, their actions have consequences.”

This is the posturing and it will definitely turn into some actions; the actions yet undefined, perhaps not yet clearly planned.

So far, Joe Biden has challenged China, Russia, and Turkey. All of them are strategic partners of Central Asia, accounting for bulk of the trade-economic activity in the region.

There is the need to look at the contrast – On one side there is Central Asia, a region composed of sovereign countries that believe in conciliation and sophisticated diplomacy. On the other side, there is USA under Joe Biden, where raw muscle still seems to be the primary instrument of diplomacy.

As we know, Central Asia doesn’t believe in direct confrontation. The focus is always on finding a way to protect own interest while striving for a win-win solution.

In their meeting yesterday, the presidents of Turkmenistan and Uzbekistan expressed readiness to jointly promote the Central Asia-Middle Corridor and the China-Central Asia-South Caucasus-Turkey trade and transportation route. They also underlined the need for cooperation in the development of the transport and logistics infrastructure.

This will take care of not only their own interests but also the interests of the regions and its strategic partners such as China, Russia, and Turkey. Additionally, the USA can fully benefit from these connectivity options.

President Kassym-Jomart Tokayev of Kazakhstan also stressed the need for aligning the positions across the region on key issues in his recent telephone conversation with President Berdimuhamedov. He supported the idea of holding the next meeting of the heads of Central Asian states in the capital of Turkmenistan this year. The president of Turkmenistan also had a phone conversation with the President Rahmon of Tajikistan recently.

Central Asia is fully mindful of the developments in the world and the impediments that can be thrown in its way. The personal rapport among the leaders of Central Asia and their excellent diplomatic services can adequately and amicably meet any and all challenges. /// nCa, 30 April 2021 [pictures credit UzA]