You are here: Home / Articles And Reports / Foreign minister of Iran visits Turkmenistan in last leg of Central Asia tour

This was the last leg of his 5-8 April tour of Central Asia. His earlier stops were Uzbekistan, Kyrgyzstan, and Kazakhstan.

Here is the text of the three pressers of the foreign office of Turkmenistan, summarizing the outcome of the visit of Zarif:

A representative Iranian delegation headed by the Minister of Foreign Affairs of the Islamic Republic of Iran Mohammad Javad Zarif has arrived to Ashgabat on a two-day visit. 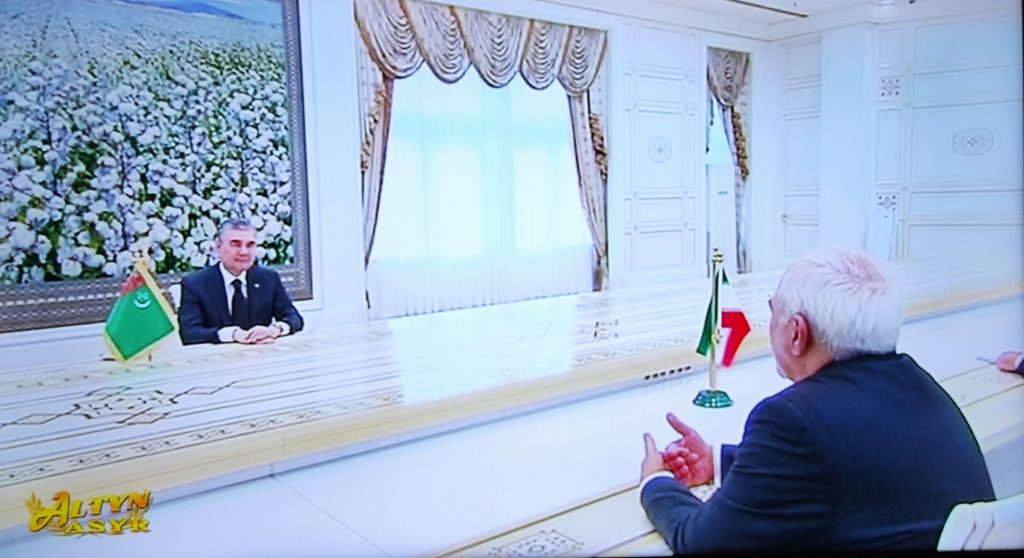 Today, on 8 April, the head of the external policy agency of Iran was received by the President of Turkmenistan Gurbanguly Berdimuhamedov.

During the talks, the parties discussed a wide range of issues pertaining to Turkmen-Iranian relations on political-diplomatic, trade-economic and cultural-humanitarian spheres.

The cooperation between the MFAs of two countries was especially discussed. The collaboration in the regional and international structures, including the UN, ECO, OIC and others was considered. The closeness of positions in regard to maintaining regional security and stability was highlighted. An exchange of views on Afghanistan was held.

The importance of the International Year of Peace and Trust initiated by the President of Turkmenistan was emphasized. The Iranian side was invited to take part in the International Conference dedicated to peace and trust planned to be held in Ashgabat on the 12th of December of current year. 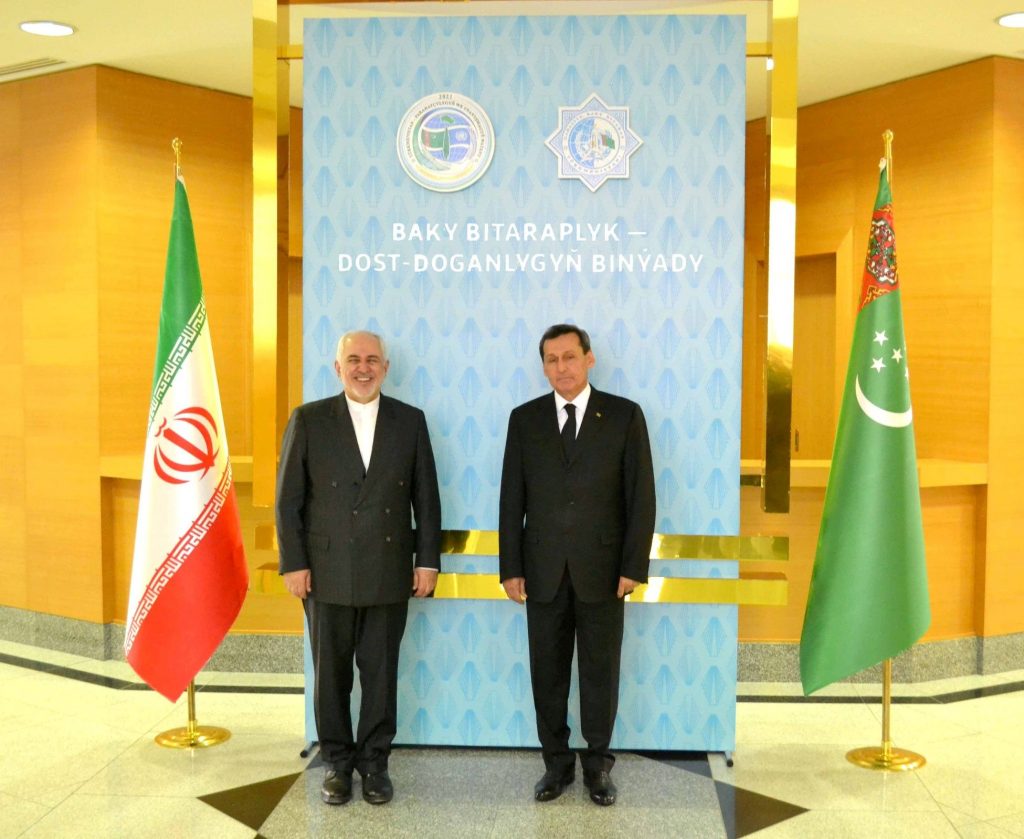 The Caspian Sea issues were considered in detail, including the analysis of the existing legal documents and the preparations to the Sixth Caspian Summit. The mutual interest in the development of cooperation on the given subject was expressed.

During the Inter-MFA consultations on the level of Foreign Ministers of Turkmenistan and Iran that were held on the 8th of April of current year in Ashgabat, special attention was paid to the intensification of trade-economic cooperation. Stressing the availability of high potential for collaboration in the given area, the parties agreed to hold a series of meetings in the framework of the preparation to the successive session of the Intergovernmental Turkmen-Iranian Commission on Economic Cooperation.

The parties appraised the level of trade turnover between the two countries and considered the partnership in the area of energy, transport and others. The necessity of organizing joint events, exhibitions and forums for the development of business relations was underlined. 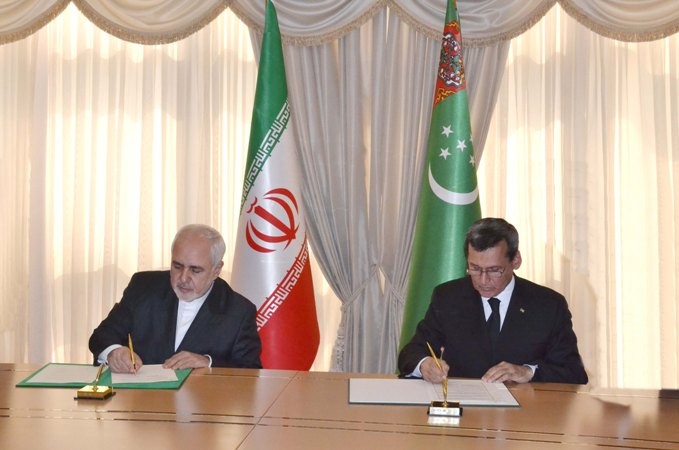 In addition, the opportunities of cooperation on the development of transport-transit potential of the region were discussed in detail. In this regard, the emphasis was made on the potential of regional transport corridors in participation of Turkmenistan such as the Lapis-Lazuli route and the international corridor “Caspian Sea – Black Sea” and the opportunity arising thereupon for the participation of Iran in the implementation of these corridors.

During the Turkmen-Iranian Inter-MFA consultations that took place on the 8th of April in Ashgabat, the cultural-humanitarian cooperation was considered in detail.

The parties expressed interest in the arrangement of joint cultural events, including those in face-to-face format as soon as the restrictive measures related to the global pandemic allow.  In particular, the delegations discussed the preparations to the 300th birthday anniversary of the Turkmen poet-philosopher Makhtumkhuli Fragi, including the opportunities of hosting joint events timed to the date.

Also, the positive experience of cooperation between the regions of two countries was noted. The parties agreed to work on the development of contacts on science, education and medicine between Turkmenistan and Iran.

Iran shares 1148km of land border with Turkmenistan, the second longest after Iraq. The Iranian sector of Caspian Sea is right next to that of Turkmenistan.

In addition to geographic proximity, both the countries are rich in hydrocarbon resources. They also have great transit-transport potential.

The foreign policy of Turkmenistan stands on the solid foundation of its permanent neutrality. In terms of political and economic relations with all the countries of the world, particularly the neighbours including Iran, it means that the priority is given to inclusiveness and shared benefits.

In the broader context, Turkmenistan would obviously be pleased with a satisfactory resolution of the impasse in the Iran nuclear deal.

In the bilateral context, seamlessly merging with the multilateral aspects, there is the need to look at the rapidly changing picture of the transport-transit dynamics in the region.

Since the breakup of the Soviet Union, Iran has served as an important territory for the trade of Central Asia with the much of the world, particularly the Middle East and Turkey.

This is changing now.

The Caspian Sea ports of Turkmenistan, Kazakhstan, and Russia have modernized to varying degrees, acquiring the ability to handle large volumes of multimodal cargo shipments. This has somewhat lessened the dependence on the Iranian territory except for trade between the Middle East and Central Asia.

The Lapis Lazuli Corridor, joining Afghanistan, Turkmenistan, Azerbaijan, Georgia, and Turkey, also has the infrastructure connections with Uzbekistan and Kazakhstan. This is part of the growing inter-regional connectivity options, linking China with Europe through Central Asia.

Test runs of cargo trains have been made from China to Turkmenistan, Iran, Kazakhstan, Russia, and Europe.

The success of these experimental runs is rooted in the fact that the economic viability is the only factor that decides which route is best for trade among any number of countries in this part of the world. This is separation of economy from politics.

The emergence of different routes diminishes the importance of Iran as a transit-transport territory but only slightly. In fact, the transit-transport capacity of Iran will bounce back if the nuclear deal returns to its upright position and specter of sanctions is removed.

Simultaneously, there is the need for Iran to register certain features in its current relations with Turkmenistan.

The export promotion and import-substitution drive of Turkmenistan has started giving great results.

A number of items that were previously imported from Iran are now produced locally in Turkmenistan. Together with this, Turkmenistan is now in a position to provide certain items to the Iranian markets.

This requires a fresh look at the non-hydrocarbon trade relations between the two countries.

There is also the need to keep in focus that we are still in the midst of Covid-19 and its versions swirling around the world. We must restrict the movement of people but speed up the movement of cargo, abiding by all the safety precautions. It would be greatly helpful if Iran continuously keeps in synch its procedures and facilities with Turkmenistan. This would, to some extent, depend on how fast the vaccination can take place.

Caspian Sea is full of promise. The Caspian Convention has opened way for all kinds of bilateral and multilateral partnerships among the littoral states. Iran would benefit greatly by partnering with Turkmenistan.

In the cultural sphere, an important fact is the mausoleum of the national poet of Turkmenistan, Maktumguli Fraghi is located in Iran. Some descendants of Fraghi are living in Iran. This adds to the areas of common interest.

The world is at the threshold of recovering from the pandemic damage. The prognosis is cautiously optimistic. The only way forward is through genuine and unadulterated cooperation. This gives global context to the visit of Zarif to Turkmenistan.

Turkmenistan always remains consistent in its policies. This inspires confidence in its foreign partners and gives a sense of dependable predictability. /// nCa, 9 April 2021