You are here: Home / Articles And Reports / Summit of the Cooperation Council of Turkic-Speaking States 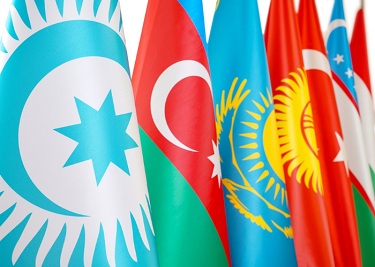 Consistently implementing a foreign policy based on the principles of positive neutrality, peacefulness and constructive international cooperation, Turkmenistan is successfully developing relations of friendship, good-neighborliness and broad mutually beneficial partnership, both in bilateral and multilateral formats.

One of the vivid examples of this is the fruitful interaction with the Turkic-speaking countries, with the peoples of which the Turkmen people are united by common historical roots, and cultural and spiritual traditions dating back millennia. In the modern era, these good traditions have received a new continuation and filling, creating favorable preconditions for further intensifying multifaceted cooperation, which is based on goodwill, impressive potential and a common desire for progress and prosperity.

It is noteworthy that the head of Turkmenistan has repeatedly participated in the forums of the Turkic Council held at the highest level. This in fact confirms the proactive position of our country in matters of interaction with regional and international structures, the optimal implementation of existing opportunities for building up effective trade, economic, humanitarian and cultural ties in the vast geographic space occupied by the Turkic-speaking states on the Eurasian continent.

The agenda of the forum included issues of expanding and strengthening a multifaceted interstate partnership that meets the interests of common prosperity and sustainable development.

The speech of President Gurbanguly Berdimuhamedov was heard by the participants of the Summit with great interest and attention.

In their speeches, the heads of states participating in the forum noted the importance of the Summit in the context of enhancing cooperation between the countries of the region, sharing experience, voiced important initiatives on issues related to ensuring general security and stability, sustainable development of the economies of partner countries.

The Summit participants expressed the interest of the Turkic states in expanding multi-vector cooperation with Turkmenistan geographically located in Central Asia, which has established itself as a reliable and responsible partner. /// TDH, 31 Mar [abridged] 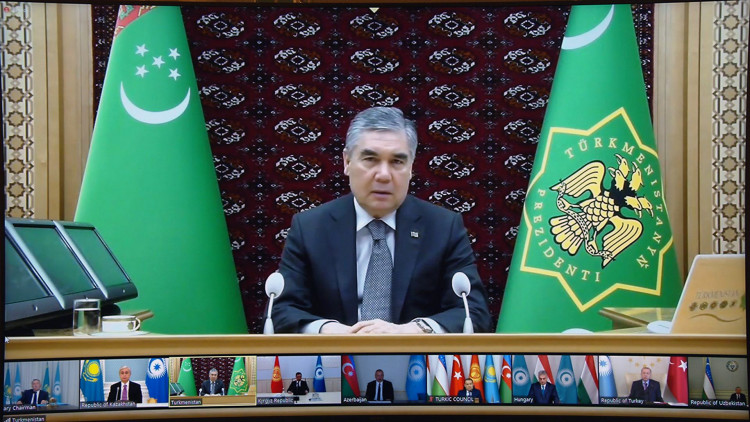 Dear heads of the Turkic-speaking states! First of all, I sincerely thank you for striving to build up friendly cooperation with Turkmenistan, providing support to our country in the international arena, in particular, within the framework of the United Nations, as well as for regular assistance in the implementation of our peace-loving foreign policy, based on a well-thought-out domestic policy.

This phenomenon, characteristic of our peoples, and their national mentality, is based on the principles of friendship, brotherhood, mutual assistance and solidarity.

Taking this opportunity, I would like to separately thank His Excellency, the first President of the Republic of Kazakhstan – Elbasy, Honorary Chairman of the Cooperation Council of Turkic-speaking States, Mr. Nazarbayev Nursultan Abishevich for the high respect shown – the invitation to this international forum as an honored guest.

In addition, I express my gratitude for the created optimal conditions for holding the current Summit, designed to further develop friendly ties and mutually beneficial partnership between the Turkic-speaking countries!

Dear Heads of State! The agenda of the current Summit, which is of great importance in bringing relations between our countries to new frontiers, includes important topics to determine the vectors of coordinated and comprehensive activities of the Turkic-speaking states.

In particular, the forum discusses topical problems of the present and long-term prospects, as well as considers a number of important organizational issues. I am sure that the decisions taken at the end of the meeting will be positive for all parties.

As you know, Turkmenistan has put forward significant initiatives on topical issues on the agenda of international politics, including in the field of global and energy security, development of the transport sector, environmental protection, intensification of trade and economic ties and others. Our state is very responsible for the practical implementation of these proposals on a global scale.

Therefore, at this Summit, I would like to draw your attention to certain issues of international importance with great respect.

First, one of the urgent tasks of our time is to ensure global energy security.

Realizing the need for equitable and fair use of world energy resources, Turkmenistan stands for the formation of a reliable and stable system of their supply to world markets, taking into account the interests of the respective parties.

In this context, our country proposed, within the framework of international organizations, especially at the level of the United Nations, to establish negotiation processes on global energy security.

The relevant resolutions developed in this area have found great support from the UN General Assembly.

We invite those interested in creating a system of general energy security of the country to take an active part in this matter.

Turkmenistan intends to continue making efforts in this direction. Therefore, our country will conduct constructive international cooperation to bring oil and gas resources and electricity to world markets, which, I am sure, will be very beneficial for all countries, including the Turkic-speaking states.

Secondly, today the transport and communication sector is one of the strategic areas of the economy. Our countries have enormous potential for joint implementation of measures that give positive results.

Prior to this, the General Assembly of the United Nations, on the initiative of Turkmenistan and with the support of the participating countries of the current Summit, adopted three resolutions in the field of development of all types of transport. In order to translate these constructively oriented international documents into a practical plane, a lot of work is being done today to create global transport and transit corridors.

I am sure that the fraternal Turkic-speaking states will take an active part in joint work aimed at the further development of international transport systems.

Thirdly, one of the priorities of the international activity of Turkmenistan is the sphere of ecology and environmental protection, which at the present time is an urgent problem of society and life. As for the Central Asian region, the priority attention is given to the difficult situation with the Aral Sea.

This ecological disaster directly affects the life and health of the peoples living in the Aral region and other countries. Therefore, the elimination of this disaster and its negative impact is urgent.

Turkmenistan conducts its activities in the field of ecology and environmental protection actively, at the global level. Our country was the author of the General Assembly Resolution “On cooperation between the United Nations and the International Fund for Saving the Aral Sea”, and also put forward an initiative to develop a United Nations Special Program for the countries of the Aral Sea basin. Currently, Turkmenistan is closely cooperating in this area with the world community, primarily with the United Nations.

I am convinced that these necessary measures will contribute to further building up interaction between our countries, and I also call on all parties to actively participate in the implementation of the above documents!

In this regard, I am firmly convinced that the purpose of the work carried out in the above three directions and strategic vectors of international partnership will be reflected in the documents aimed at developing relations between the Turkic-speaking countries!

Dear Heads of State! Culture, science and education play a huge role in friendly and fraternal relations between our countries, which we always emphasize. Since a single spiritual and cultural heritage and common values ​​serve as a solid foundation for strengthening and expanding ties between our countries.

Therefore, I consider it expedient to expand the range of programs and projects carried out within the framework of TURKSOY, which is an international organization for the culture and art of the Turkic peoples.

I propose in this context to carry out appropriate work for the dissemination and worldwide popularization of the works of our famous poets and prose writers, and outstanding figures of culture and art.

Currently, we have begun preparations for the celebration in 2024 of the 300th anniversary of the outstanding Turkmen classic poet Makhtumkuli Fraghi. In this work, we attach great importance to international cooperation, in particular, joint activities with the Turkic-speaking states.

At the same time, I am firmly convinced of the need to further intensify the interaction of our countries in the field of culture.

Dear Heads of State! I would like to draw your attention to one more important issue. As you know, today the whole world is going through a very difficult test: for more than a year now, a serious threat has hung over all countries – a pandemic of a new type of coronavirus, to overcome which enormous efforts of the entire world community are needed.

Turkmenistan was among the first to take comprehensive measures to prevent the penetration of COVID-19 into its territory.

At the same time, our country put forward international initiatives aimed at developing joint and agreed solutions to counter the spread of this infection, and also actively participated in the implementation of specific targeted measures in the region.

Along with this, Turkmenistan is a supporter of the consolidation of efforts and potential of all countries in the fight against modern challenges and threats. It can be noted that our states have accumulated some experience in joint work in this direction.

I want to emphasize that it would be very correct if, in the future, medical institutions and research institutes of our countries, shoulder to shoulder, together with the world community, will work to combat the coronavirus pandemic.

Dear Heads of State! In conclusion, I express my firm confidence that this Summit and the issues discussed during it will contribute to further building up equal and mutually beneficial partnership, as well as friendly and fraternal relations between our countries and peoples!

Thank you very much for your attention. /// nCa, 1 Apr

The Informal Summit of the Cooperation Council of Turkic Speaking States (hereinafter referred to as the Turkic Council) was held via videoconference on 31 March 2021 on the theme of “Turkistan – A Spiritual Capital of the Turkic World”.

The Heads of States of the Turkic Council,

Celebrating Nowruz, a holiday which welcomes the vernal equinox and symbolizes the renewal of nature and the beginning of new life;

Highlighting the remarkable political and socio-economic progress that the Turkic Speaking States achieved during the last decades and highly valuing the evolution of multilateral relations in the Turkic World and expressing their strong commitment to further deepening cooperation among the Turkic States;

Commending the liberation of territories of the Republic of Azerbaijan from military occupation and welcoming the end of the Armenia-Azerbaijan conflict;

Reiterating their determination to lay down long-term vision and goals for closer cooperation and enhanced solidarity in the Turkic World and to shape the strategic orientation;

Underlining the significance of the multilateral economic cooperation as a tool for contribution to the peace, stability, security and prosperity for the benefit of their peoples;

Acknowledging the spiritual significance of the city of Turkistan in bringing peoples together from across the wider Turkic World;

Praising the heritage of Kozha Akhmet Yasavi as a great inspirational figure, who founded Turkic school of Islamic morality and exerted a powerful influence on the development of philosophy across the Turkic World;

Expressing the importance of continuation of holding consultations on regional and international issues affecting the interests of the Turkic World in order to develop a consolidated position of the Member States of the Organization on them in line with the Nakhchivan Agreement on the Establishment of the Cooperation Council of Turkic Speaking States.

Adopted on 31 March 2021 at the videoconference in the Azerbaijani, Kazakh, Kyrgyz, Turkish and Uzbek languages. /// Turkic Council, 31 Mar