An investigative report published by The Gray Zone has decisively debunked the US State Department accusations of the genocide of the Muslim Uyghur population in the Xinjiang province.

Gareth Porter and Max Blumenthal, both of them journalists with impeccable credentials and authors of several books have compiled the report.

Their complete report can be found here: https://thegrayzone.com/2021/02/18/us-media-reports-chinese-genocide-relied-on-fraudulent-far-right-researcher/

Porter and Blumenthal have shown in their investigative report that the ‘research’ of Zenz is built on flagrant data abuse and outright falsehoods.

To be specific, the US government’s accusation of genocide against China stems from a single source: a June 2020 paper by Adrian Zenz, a right-wing German researcher affiliated with the Victims of Communism Memorial Foundation and neoconservative Jamestown Foundation in Washington, DC.

Porter and Blumenthal write that the articles by the Associated Press, CNN, and BBC also relied on Zenz’s article to claim that plunging Uyghur birth rates and the application of birth control measures in Uyghur counties of the Xinjiang region were proof of a policy of “demographic genocide.”

Out of several graphics in the report of Porter and Blumenthal, one would suffice to refute the Zenz allegations: 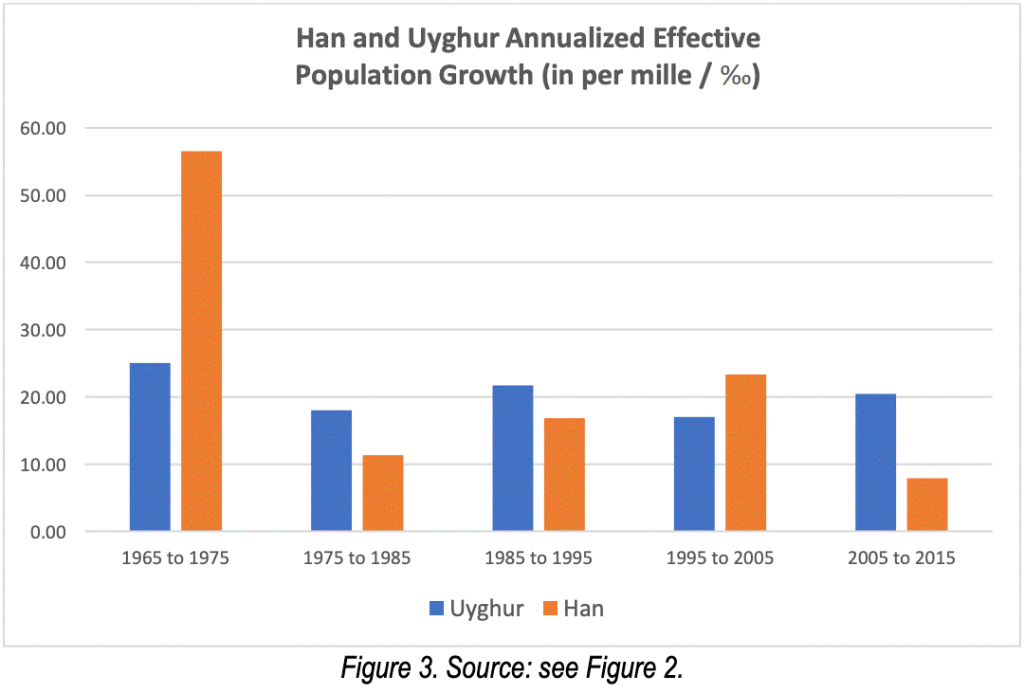 This chart is from Zenz’s article. It shows that during 2005-2015 the growth rate of the Uyghur population was more than twice the rate of the Han population.

Both official Chinese figures and Zenz agree that the Uyghur population in Xinjiang increased significantly between 2010 and 2018.

Lyle Goldstein, a China specialist and research professor in the Strategic and Operational Research Department of the Naval War College, told The Grayzone that Zenz’s labeling of the Chinese approach to the Uyghurs as “demographic genocide” is “ridiculous to the point of being insulting to those who lost relatives in the Holocaust.” /// nCa, 1 March 2021