Togan Oral, Ambassador of the Republic of Turkey to Turkmenistan 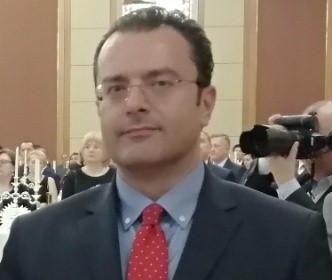 Four years have passed since the heinous coup attempt organized and carried out by the FETO terrorist organization against Turkish democracy and the democratically elected government.

After four years, Turkey’s fight against FETO terrorism and its sinister methods continues with strengthening determination.

15th of July coup attempt was planned by the FETO leadership and carried out by members of the organization, who infiltrated into our military by disobeying the chain of command of the armed forces. This heinous act constitutes the deadliest terrorist attack that Turkey has ever experienced.

We have never before witnessed such savagery and treachery in our history as the one exhibited by the perpetrators of this coup attempt: our Parliament Building, the Presidential complex, the National Intelligence Organization, Headquarters of the Turkish National Police, the Headquarters of the Special Operations Unit in our capital Ankara were bombed by terrorist pilots. Tanks were driven to the streets to mow down civilians, while helicopters and fighter jets dropped bombs from the air and shot innocent men and women in sight. That night, two hundred and fifty one Turkish citizens were killed and more than two thousand people were injured.

The 15th of July coup attempt revealed the grave threat posed by the FETO terrorist organization against our democracy.

By brainwashing young minds in schools at an early age founded under the disguise of so-called education activities, FETO indoctrinated a large group of radical followers, who carried out the instructions of the organization’s leadership without question and violated all legal and moral norms. Graduates of FETO schools infiltrated the most critical state institutions by stealing entrance exam questions; furthermore, those considered as an obstacle to the organization were treacherously eliminated by way of conspired plots.

FETO misappropriated state sources and authority along the organizational interests, hence multiplying its political and economic influence. The magnitude of secretive cells operating within the Turkish Armed Forces could only be realized in the aftermath of July 15-coup attempt.

In the past four years, the fight against FETO both inside and outside Turkey has constituted one of the main priorities of our country.

Firstly, on the basis of the rule of law, the perpetrators of the 15th of July coup attempt have been brought to justice.

Secondly, FETO’s organizational structure within governmental institutions has been unveiled; administrative and judicial procedures have been initiated against its members and hence the “parallel state structure” has been brought down.

Thirdly, apart from those within the governmental institutions, FETO’s attempts to spread across all areas of the economy via its shell entities, particularly in the sphere of education, media and banking sectors, have been thwarted.

As these developments took place, FETO has undergone a significant transformation. The organization, which lost its backbone in Turkey, is now trying to survive by making use of its network abroad.

It should be borne in mind that FETO poses a serious threat to the security of countries where it remains active. Therefore, we continue to warn our friends and allies against this evil structure, which does not hesitate to violate the laws and create structures in their host countries similar to those in Turkey in order to expand its political and economic zone of influence.

Secondly, we have taken administrative measures and initiated legal proceedings to limit the maneuvering space of the FETO terrorist organization abroad and to prevent its members from transferring money and escaping justice. Within the scope of investigations conducted in Turkey, we have requested the extradition and the freezing of the assets of FETO members from the countries where these persons are located.

Thirdly, within the scope of our cooperation with Turkish Maarif Foundation in halting FETO’s education activities abroad, FETO-affiliated schools and education centers in 38 countries were closed down or taken over by the relevant authorities of concerned country. 214 FETO-affiliated schools in 20 countries have been transferred to Turkish Maarif Foundation. The Foundation now operates 333 schools in 43 countries, providing education to around 39 thousand students.

In the international realm, it is inevitably understood that FETO is not a social movement engaged in charitable education efforts, but rather a secretive, clandestine organization.

The awareness raised regarding FETO in third countries has also stimulated closer monitoring and investigation of the activities related to these elements by the officials of some countries. Considerable number of FETO members were either deported or extradited to Turkey.

In this regard, Turkey is grateful to brotherly Turkmenistan, which promptly realized true nature of this evil structure and closed down FETO-affiliated schools, demonstrating support and solidarity in our fight against FETO.

We would like to once again thank H.E. Gurbanguly Berdimuhamedov, President of Turkmenistan – our “Ancestral Land” – and his Government for their swift declaration of support for Turkey during the episode of the coup attempt on the night of 15 July 2016.

Suffering from disruption in its global network, FETO tries to present itself as ‘victimized’ through unfounded allegations and coverages by using public relations and lobbying, to gain visibility and to enhance cooperation with anti-Turkish alliances.

Our efforts against FETO’s global network is of a long-running character. Turkish Government will resolutely and tirelessly carry on efforts in this direction.

Success in the fight against global terrorism requires collective actions of all states, should we aim to prevent terrorist organizations from disrupting peace and well-being of our peoples. /// nCa, 14 July 2020