You are here: Home / Articles And Reports / Turkmenistan-Afghanistan-Azerbaijan trilateral summit in video format

A trilateral summit between the presidents of Turkmenistan, Afghanistan, and Azerbaijan took place on Thursday in the video format. It was held at the request of the president of Afghanistan.

The dominant theme was the streamlined activation of the Lapis Lazuli Corridor and the institutionalization of assets and resources to give it a panoramic viability and attractiveness.

By the end of the dialogue, it was clear that there is the political will to upgrade Lapis Lazuli to a multipurpose corridor including not just the transport-transit but also energy and communications.

The summary of remarks of the presidents will illustrate the direction the summit took and the intended outcomes:

Turkmenistan, Afghanistan, and Azerbaijan are located at the crossroads of continental routes. Our territory affords access to South Asia, Asia-Pacific, Black Sea and the Mediterranean, the Middle East, Russia, and Baltics. We have great prospects for creating sustainable transport routes in four geographical directions.

To make use of our potential, it is important to establish a good transportation network.

First, based on the Lapis Lazuli agreement – Afghanistan-Turkmenistan-Azerbaijan-Georgia-Turkey – of 15 November 2017, we should create a joint logistics centre. The centre should ensure joint action for the stable functioning of the corridor. As the first step toward this direction, I propose to create a structure for coordinating the logistics activities in the tripartite format.

Second, the availability of modern, high-tech transport infrastructure is of paramount importance for increasing the efficiency of freight transportation. This necessitates further development of the entry/exit points of cargo such as seaports, railway stations, and trucking terminals.

Turkmenistan has an advanced transport system. The Turkmenbashy Port has oil, ferry, passenger, and cargo terminals. The length of the port berth, designed to serve 17 vessels simultaneously, is more than 1800 meters. Each year, the sea harbor allows the passage of 400 thousand containers and 75 thousand freight vehicles. The total capacity of the Turkmenbashi International Seaport reaches 25-27 million tons of cargo per year.

A new complex for storing gasoline and diesel fuel was built at the Imamnazar checkpoint of the Turkmen-Afghan border, continued President Gurbanguly Berdimuhamedov. It is another significant link in the Turkmen transport support systems along the Afghanistan-Turkmenistan-Azerbaijan route. 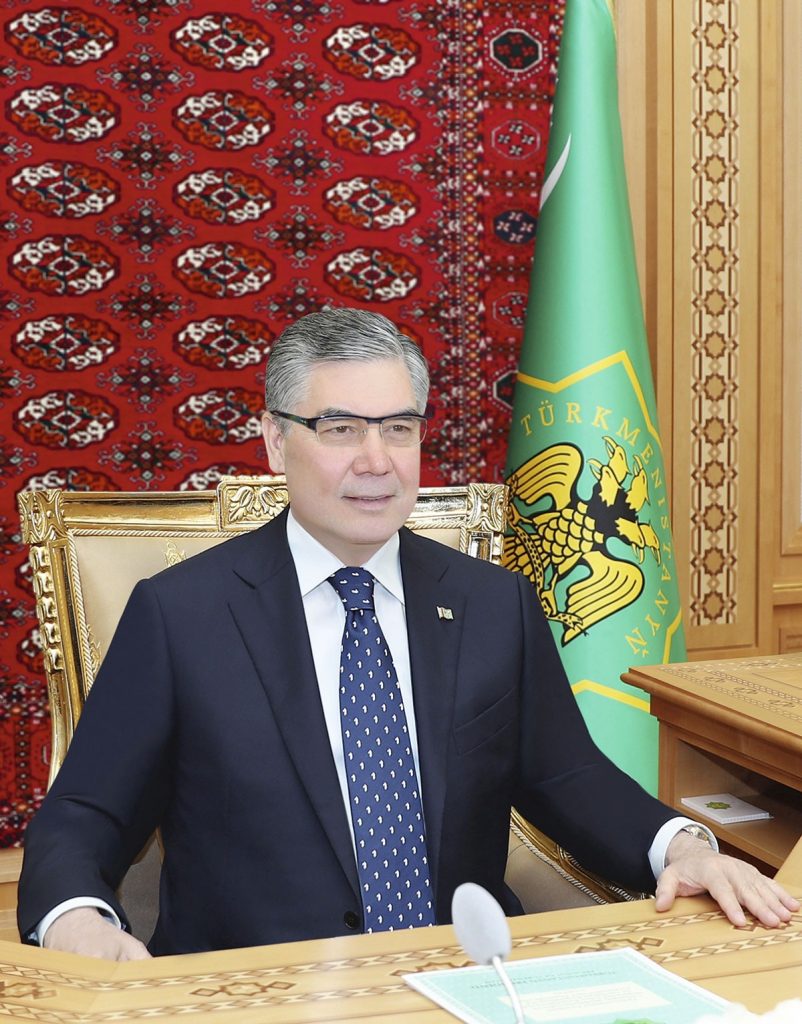 In its terminals, storage of 44000 tons of petroleum products is possible. At the same time, the throughput capacity of the complex is up to 540000 tons of oil products per year.

At the Serkhetabat (Kushka) checkpoint of the state border of Turkmenistan with Afghanistan, there are also favorable opportunities for the transit of goods and products.

In order to ensure uninterrupted transportation of large volumes of cargo between our countries, we support the proposal to create stations in the villages of Akina and Turgundi in Afghanistan, located opposite the aforementioned Turkmen checkpoints, for transporting a bulk carrier. And our country is ready for active participation in this work.

Third, we consider it appropriate to pursue a single pricing policy for the transportation of goods along the Afghanistan-Turkmenistan-Azerbaijan route and in the opposite direction. We believe that the basis for such a policy should be the desire to create optimal economic and financial conditions that are equal for all participants in the partnership in the transport sector.

In this context, the parties can discuss the issues of providing each other with various benefits – such as reducing prices (tariffs) for transit, exemption from payment for certain types of services during storage of goods.

Fourth, we should consider the possibility of simplifying customs operations by introducing a control system based on the Single Window principle. As noted, a special program “ASYCUDA” of the United Nations, intended for the customs service of the country, is already successfully implemented and practiced in Turkmenistan.

The exchange of useful experience between the customs services of our countries will contribute to the formation of a “green corridor” along the route Afghanistan-Turkmenistan-Azerbaijan.

Fifth, it is necessary to prepare an atlas of the Afghanistan-Turkmenistan-Azerbaijan route in digital format with detailed information on the existing transport and communications infrastructure, the head of state continued, noting that this will increase the investment and commercial attractiveness of this corridor.

To elaborate on these ideas, we propose to hold in July this year an online meeting of the transport authorities and other related departments of the three countries.

We would also like to draw attention to the telecommunications cooperation potential.

Implementation of these projects will create a new telecommunications transit route between Asia and Europe. We propose to unite the efforts of neighboring countries by developing a flexible form of trilateral cooperation.

This will open up additional opportunities for entering the large-scale market of information services on the Eurasian continent using the most modern, advanced technologies.

When forming joint approaches to solving specific problems outlined at today’s meeting, it is important to take into account mutual interests in the context of ensuring the economic development of our countries and improving well-being their peoples.

We are grateful for the cooperation for the revival of the Lapis Lazuli Corridor.

We thank Turkmenistan for extending the railway line to two dry ports of Afghanistan – Aqina, and Torghundi. We are also thankful to Turkmenistan for the establishment of two corona testing labs, and the decision to quickly restore the flow of goods.

We welcome the proposal of Azerbaijan to form a joint task force at the level of transport and other relevant ministries from the three countries for further improvement of regional connectivity, railway, and fiber optics.

We propose that the joint task force should report to the three presidents on quarterly basis to help solve the issues quickly and avoid the bureaucratic bottlenecks.

Afghanistan is ready to extend joint cooperation with public and private sectors of Azerbaijan and Turkmenistan and invites Azeri and Turkmen firms to join ventures with Afghanistan, particularly in the areas of marble, and agriculture, where we plan to bring 1.4 million hectares of land under cultivation.

We request Azerbaijan and Turkmenistan to simplify the customs processes for the Afghan traders.

To make use of the railway trade and transit and integration potential there is the need to build 4000-6000 km of railway lines.

Afghanistan is creating standard dry ports at eight points. The US Development Finance Corporation, the EU, and the ADB are willing to offer guarantees.

We are working on TAPI (Turkmenistan-Afghanistan-Pakistan-India) gas pipeline. Our goal is to create an energy corridor from Azerbaijan to Afghanistan, and potentially expand it to Pakistan and India.

Linking Azerbaijan to the fiber optic corridor will change the face of interactions between South Asia and Central Asia connecting us with Europe and including China.

Afghanistan is committed to peace. The Afghan Foreign Ministry is going to have a meeting with 18 neighbor countries, near and far, as part of a regional approach to receive support of the countries in the region.

We welcome the suggestions including the formation of a joint task forces, creation of common tariff policy, streamlining customs processes, establishment of joint logistics center, availability of high-tech transport infrastructure and other suggestions. We consider them as advantageous factors for improvement of regional connectivity, trade, transit and efficiency of freight transportation.

The railroad has proven its value during the times of the coronavirus. The trucking industry is import but the railway is our lifeline.

Azerbaijan has close friendly and fraternal ties with Afghanistan and Turkmenistan. Numerous mutual visits at the level of heads of state, our meetings as part of international events have made an important contribution to the development of these ties.

Thanks to large investments made in the transport sector, a modern transport and logistics infrastructure has been created in Azerbaijan. In 2018, the Alat International Sea Trade Port [Baku] with a transshipment capacity of 15 million tons of cargo and 100 thousand containers was commissioned. In the future, the port’s capabilities can be increased to 25 million tons of cargo and 1 million containers. 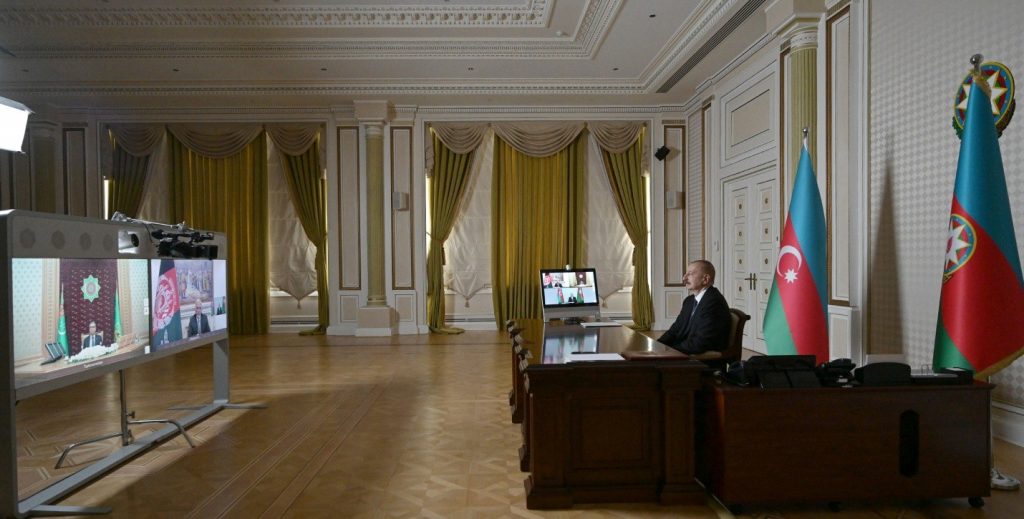 Azerbaijan has the largest fleet in the Caspian Sea, consisting of 260 ships. From 2013 to the present, 10 ships have been built at the modern shipyard operating in Azerbaijan, and 140 ships and platforms were repaired. Currently, the construction of 2 RoPax ferries and 3 oil tankers is ongoing at the plant. For 2021, it is planned to build additional ships. These vessels will serve to increase cargo transportation in the Caspian Sea.

In 2017, the Baku-Tbilisi-Kars railway was commissioned. We consider this a historic event. It is no coincidence that this road is called the Iron Silk Road. This project connects continents. Azerbaijan, as a country located between Asia and Europe, makes a great contribution to the transport and logistics sector in the Eurasian space. The volume of goods transported by the Baku-Tbilisi-Kars railway in the first six months of 2020 is 3.7 times more than in the same period in 2019.

The East-West transport corridor is already fully operational. In 2019, 8.7 million tons of cargo were transported along this corridor. In the first four months of this year, this figure has already reached 3 million tons. Azerbaijan is also an active participant in the North-South transport corridor. In the Azerbaijani segment of the corridor, all work has been completed. Through this corridor, 2.1 million tons were transported last year, and 800 thousand tons of cargo in the four months of this year. Within the framework of the East-West transport corridor, Azerbaijan has achieved positive results in cooperation with Afghanistan and Turkmenistan. 9 of the 21 documents signed during my official visit to Turkmenistan in November 2018 relate to the transport sector. In the first half of 2020, more than 1.5 million tons of cargo were handled in the Alat international sea trade port in the direction of Turkmenistan and back. This is 28 percent more compared to the corresponding period last year. The volume of dry cargo handled increased by 7.7 times and amounted to more than 370 thousand tons. The Turkmen side is invited to participate in the consortium, which will be created to manage the fertilizer terminal, scheduled for construction in the port.

After connecting the Lapis-Lazuli route with the Baku-Tbilisi-Kars railway in 2018, goods from Afghanistan began to be transported from Turkmenistan to Azerbaijan and further to the west. The first experimental cargo sent from Afghanistan in December 2018 was delivered to the Baku port within 12 days. In January-May of this year, 55.5 thousand tons of cargo were transported through Azerbaijan in the direction of Afghanistan and back. During this period, Azerbaijan delivered 12,000 tons of cargo belonging to ours and other countries to Afghanistan by transport planes.

On the initiative of Azerbaijan as chairman of the Non-Aligned Movement, a Summit on the fight against coronavirus was organized by video conference on May 4 in the format of the contact group of the Movement. The presidents of Afghanistan and Turkmenistan also attended this meeting.

Recently, more than 130 countries of the world supported our other initiative – the proposal to hold by video conference a special session of the UN General Assembly at the level of heads of state and government dedicated to the COVİD-19 pandemic. I take this opportunity to thank the presidents of Afghanistan and Turkmenistan for supporting this initiative.

European Union’s interest in the East-West transport corridor is growing. The President of the Council of the European Union, Mr. Donald Tusk, who paid a visit to Azerbaijan in July 2019, visited the Alat International Sea Trade Port and familiarized himself with its capabilities on the spot. Several European countries have already joined this corridor. Other partner states also show great interest in the transportation of goods along this corridor.

The countries of Europe and Asia are participants in the East-West transport corridor. I believe that the topic of today’s meeting – transport and logistics – could be the first step for practical cooperation between the European Union and the Non-Aligned Movement.

Along with bilateral cooperation, the concept of trilateral cooperation occupies an important place in the foreign policy of Azerbaijan. I am confident that the results of our tripartite meeting today will be successful and will contribute to regional cooperation and economic development. Thank you for attention. /// nCa, 3 July 2020