You are here: Home / Articles And Reports / Finland as role model for Central Asia – Part 2

The Finns are living in the post-gender-equality era. They are where most other countries aspire to be.

Since the Parliament Act of 1906, the women and men in Finland have exercised the equal right to vote and to stand for elections for any office.

Within a year of the passage of this Act, 19 female MPs in Finland made it to the parliament.

Ms. Miina Sillanpää of the workers’ movement became the first female minister in 1926.

Even though the Parliament Act of 1906 structuralized the base for gender equality in Finland, the tradition for the representation of the women existed even earlier. The tax payer female members of the guilds were allowed to vote during the Swedish Age of Liberty (1718-1772).

The predecessor state of the modern Finland, the Grand Duchy of Finland, which was part of the Russian Empire, granted the tax-paying women the municipal suffrage in the countryside in 1863, and to the women in cities in 1872.

Ms. Tarja Halonen was the first female to be elected as the President of Finland, in 2000. She was reelected in 2006.

Everything starts with education.

In 1870, Ms. Maria Tschetschulin became the first female to be accepted as student at a university. This encouraged many girls’ schools to start preparing the female students for university.

By 1882, the women were given the right to teach in the grammar schools for girls.

By 1915, the girls and boys started to receive the same education in the school system.

When the girls were given the level playing field with the boys, they proved themselves in the areas previously believed to be a domain for the boys.

Generally the excellence in the mathematical skills is an area dominated by the boys but in Finland the proportion of top performing girls is the same as the top performing boys. This is the case with only three countries in the world – Finland, Australia, and Canada.

The women constitute more than 32% of the students studying computer science and mathematics in Finland.

About 32% of the self-employed labour force in Finland consists of women.

The overall representation of women in the work force is more than 51%. In a typical organization or company, one would find more females than males in the team. 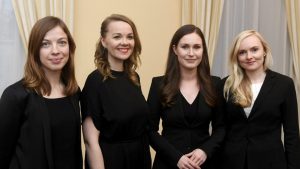 In this picture, from left to right, are Finland’s Minister of Education Li Andersson, 32; Minister of Finance Katri Kulmuni, 32; Prime Minister Sanna Marin, 34; and Interior Minister Maria Ohisal, 34. [This picture is copy right to AFP/Getty Images]

The Finland’s newest Prime Minister took office in December 2019, leading a coalition government in which all five party leaders are women. At 34, Sanna Marin is the world’s youngest head of state, and three of her other coalition leaders are also younger than 35. Twelve of the nineteen new Finnish cabinet members are women, meaning Finland’s government has the second-highest percentage of female ministers in the world, after Spain. Prime Minister Marin represents the Social Democrat Party, and previously served as Transportation Minister after being elected to parliament in 2015.

If we describe the present government in Finland as victory of feminism, we will be greatly reducing the value of what has actually been achieved.

As said earlier, Finland is in the era of post-gender-equality. The voters did not look at the gender of the candidate. They sent to office the people they thought can run the country best. Their ability to deliver on the promises, not their gender, is the decisive factor. /// nCa, 21 January 2020