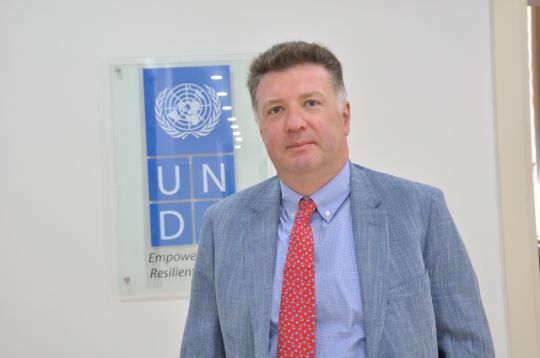 UNDP: Tell us about your career as a human rights lawyer/expert/activist/professional

Mr. Tugushi: I got actively involved in the human rights work in 2004 when I returned back home from Sweden after accomplishing my studies in international human rights law in Lund University. I got a job in the office of the Public Defender (Ombudsman) of Georgia to lead the Department for International Relations. Later, I joined OSCE and worked 4 years as a human rights officer in the mission. In 2005, I got elected to the European Committee against Torture (CPT) and stayed in the committee until 2017.  In 2009, I joined Ombudsman office again to lead the capacity building work as a European Union Project Leader. In the same year Georgian Parliament elected me as an Ombudsman. During 20011-2015 I also served as a member and Vice-Chair of the UN Committee against Torture (CAT).

UNDP: What it means for you to be an Ombudsman? Tell us about your appointment, hardships and achievements.

Mr. Tugushi: Election on a post of the Ombudsman completely changed my life. Being Ombudsman is a challenging task in every country and requires lots of personal investment to be successful. Managing central office with more than 50 members of staff and 6 regional offices, preparing annual and special reports later presented to the Parliament, working on individual complaints, meeting numerous victims of human rights violations, visiting places for detention, actively working with different minority groups, children, people with disabilities, looking into complex rulings of the courts, ensuring right to freedom of assembly and association, representing the institution locally and abroad is just part of the tasks Ombudsman has to handle with the assistance of his staff members.

UNDP: How an ideal office of Ombudsperson works?

Mr. Tugushi: Ideal Ombudsman office, among other conditions, requires right vision, proper legal framework ensuring its operational independence, proper resourcing, including finances, staff and technical capacities. Ombudsman should act independently and ensure proper working conditions for his/her staff including opportunities for professional development. Reports and recommendations produced by the Ombudsman should always be of the best quality, ensuring credibility of the work done by the office.

UNDP: What are the career opportunities after serving as an Ombudsperson?

Mr. Tugushi: After serving my mandate as an Ombudsman, I got elected to the Parliament of Georgia and currently serve there in the capacity of the Vice-Chair of the Human Rights Committee. I also do a lot of work as international consultant on human rights. I am involved in numerous projects in more than 15 countries, providing advice to different Governments, state institutions and independent human rights institutions in several areas, including capacity building, revision of legal framework, training of staff, working methods, etc.

UNDP: What kind of work do you do in Turkmenistan?

Mr. Tugushi: As of 2018 I have honor to work in Turkmenistan with UNDP, assisting the Government in several areas related to their treaty obligations and more specifically reporting to the Treaty Bodies as well as Universal Periodic Reporting (UPR). During my last intervention in Ashgabat we discussed with local stakeholders’ different models to ensure equality and combat discrimination, as well as the role of the Ombudsman in this important process and relevant legislation.

UNDP: What observations can you make of the work of Ombudsperson’s office in Turkmenistan?

Mr. Tugushi: Ombudsman office in Turkmenistan is still rather new, established on the basis of the excellent legal framework which meets good standards. The Ombudsman is still in the process of establishing its office, strengthening its capacities and launching activities in a number of areas covered by the mandate. The office requires strong support from local authorities as well as from international community to increase capacities and act independently.

UNDP: What recommendation would you make in the process of creating of the Ombudsperson’s office?

Mr. Tugushi: Every newly established office experience numerous challenges and it takes a while to set up proper office, acquire capacities and start properly implementing the mandate.  It also takes time to be respected by the stakeholders and society. Ombudsman should be visible and information about the work done by the office should be accessible for the public. Publicity is one of the main tools in the hands of the Ombudsman to increase its impact. It goes without saying that the Ombudsman and his/her work should be respected by the authorities, provide institution with sufficient resources, carefully listen to the Ombudsman, read her reports and implement his/her recommendations.